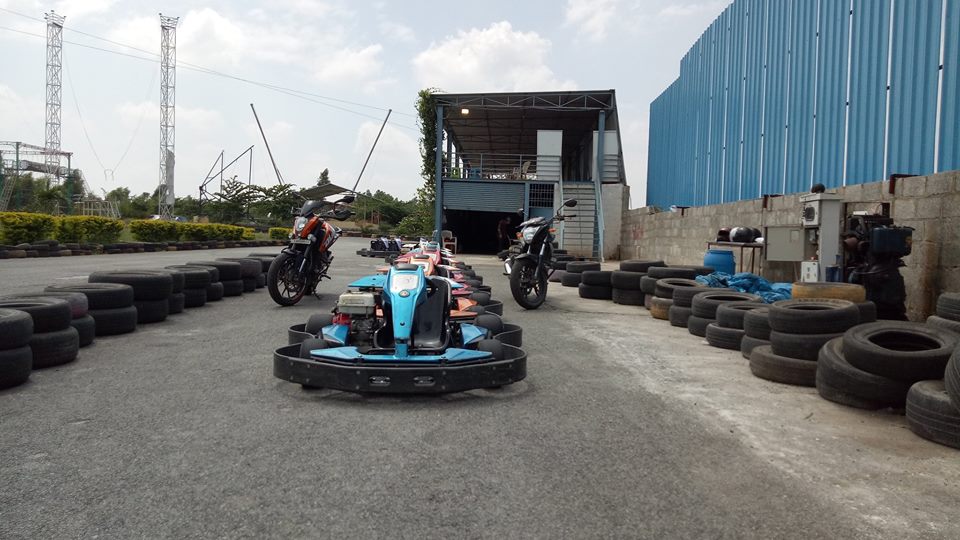 A weekend Beyond Roads: A Race Track and Dirt Trails

“I like the sweet smell of race fuel, burnt tires, and the revving sound of the engines”

Dates: 28th and 29th October 2017
No of People: 3 (Shreyas and I for the Track and Akshay joined us for Dabbaguli next day)
Bikes: Royal Enfield TB350, KTM Duke 200 and Suzuki Gixxer
Places covered: Track at Red Riders and Dabbaguli near Kanakapura.
Total Distance: Bangalore – Dabbaguli – Bangalore: 270kms

It was the last weekend for Oct’17 when my friend Shrey asked me; Bhai any rides? Apparently, I had no rides planned until I saw few pictures of the go-kart track of Red Riders Sports and Adventures which was sent by my friend Kishan and Shivaram from #GixxerClubBengaluru; they also allowed riding bikes on the tracks.

Both of us decided to go check the track for biking; if they don’t allow for bikes then we shall race few laps of go-karting and come back.

We reached there by 10 am and to our surprise, the office was not yet opened.  We called the contact number mentioned on their FB page and until the manager reached the venue, we decided to have a walk through the Track circuit.

Red Riders Go-kart track is an asphalt track surrounded by tire walls at both sides with a length of 750 meters running clockwise; comprising 11 corners of six right-handed, five left-handers and two straights with approximately 100 meters each.

The circuit layout has a garage space followed by the pit lane that can park 10 karts, a gallery stand above the garage that can accommodate 80-100 spectators. 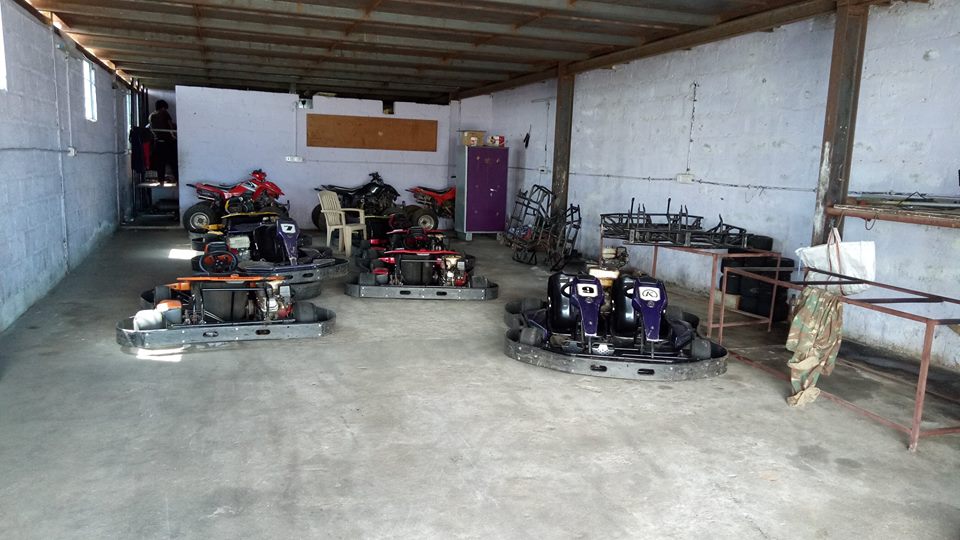 Garage space beneath the spectator stand

We had a Track Walk to understand the Entry, Apex, and Exits of every corner.

The manager of Red Riders first allowed us to ride our bikes on the track for 10 minutes and after this time we were hooked!

As we both grew up watching all sorts of Motorsports on TV from F1 to MotoGP; I was super excited to get on the track on my “Warrior”.  A long pending to-do thing was soon getting ticked off.

We immediately negotiated with the manager and started planning the session and he charged us INR 900/- per person for 12 laps of go-karting and 1 hour of track biking with a condition that in case other customers walk in for go-karting, we have to park our bikes into the pits until the customers finish their go-karting laps and we agreed for this condition.

As they got the go-karts lined up on the tracks, Shrey drew a sketch of the track. 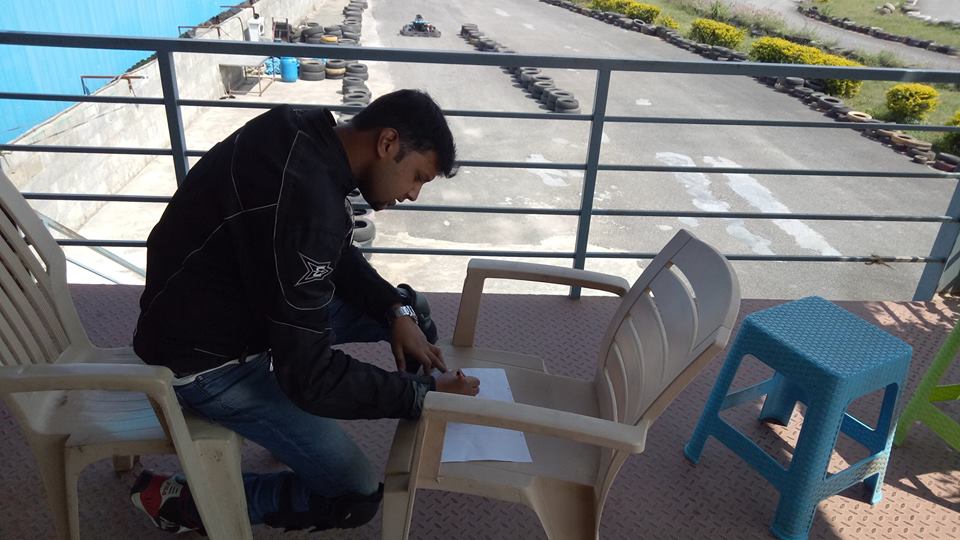 Shrey making a rough sketch of the track 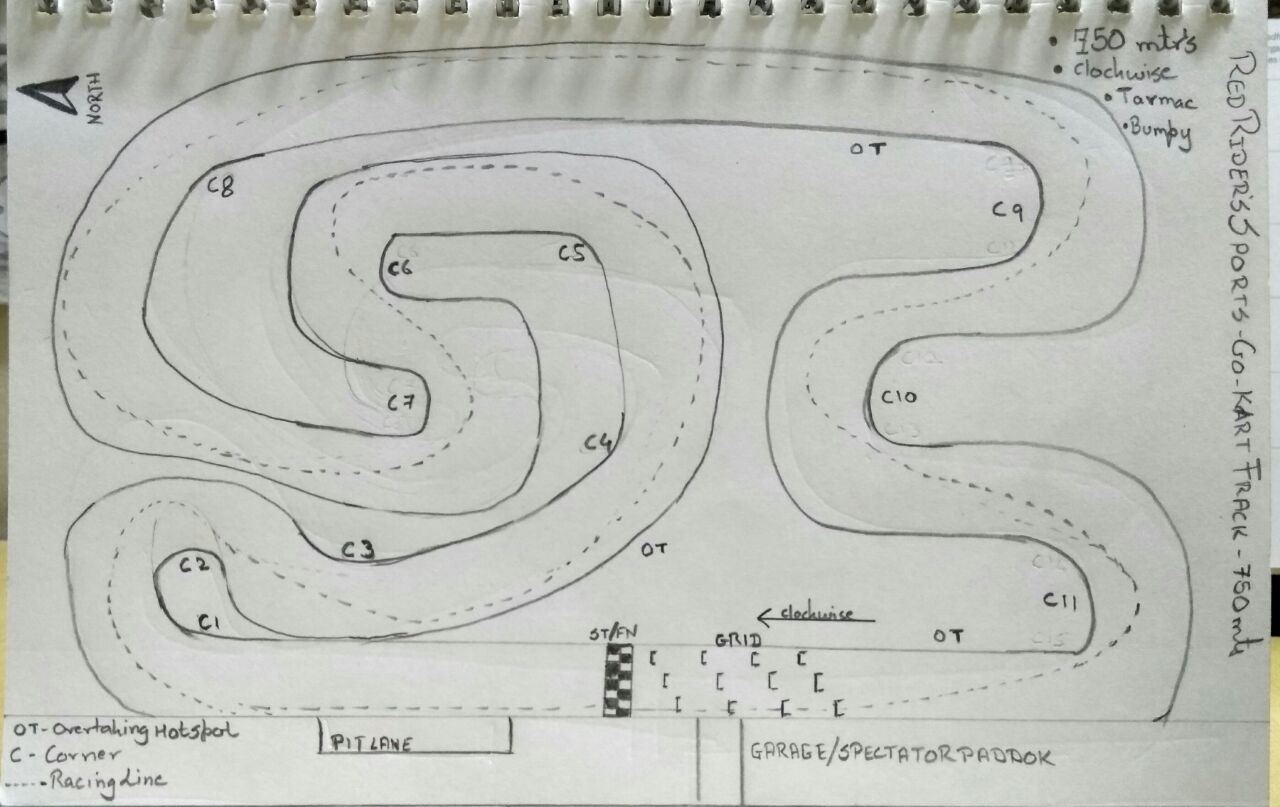 Final sketch of the track

Thank You Bhai, It was you who taught me how to ride during our school days and now on the track.

Post few visitors completing their Go-karting, we got onto the track again with our Bikes. 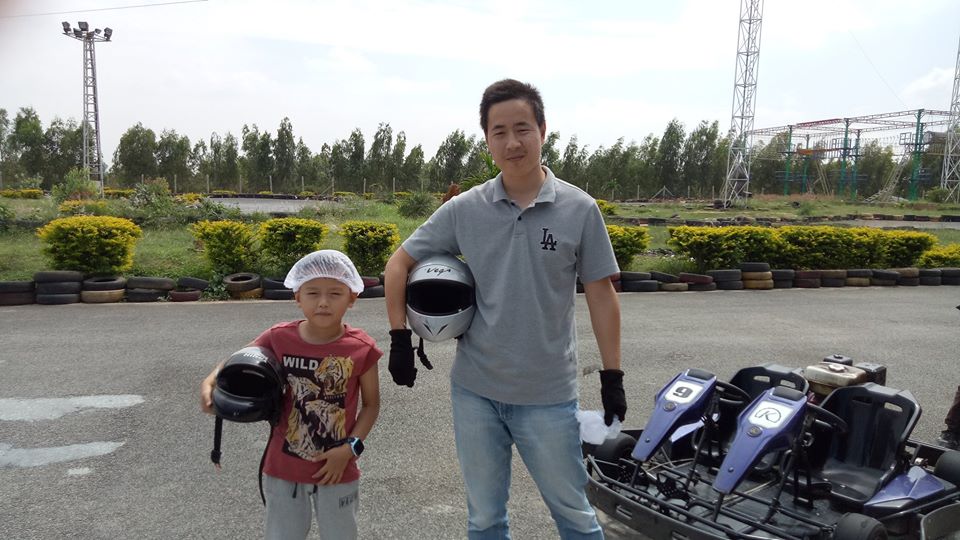 Visitors after their Go-Karting

We had some nice photo sessions before we start. 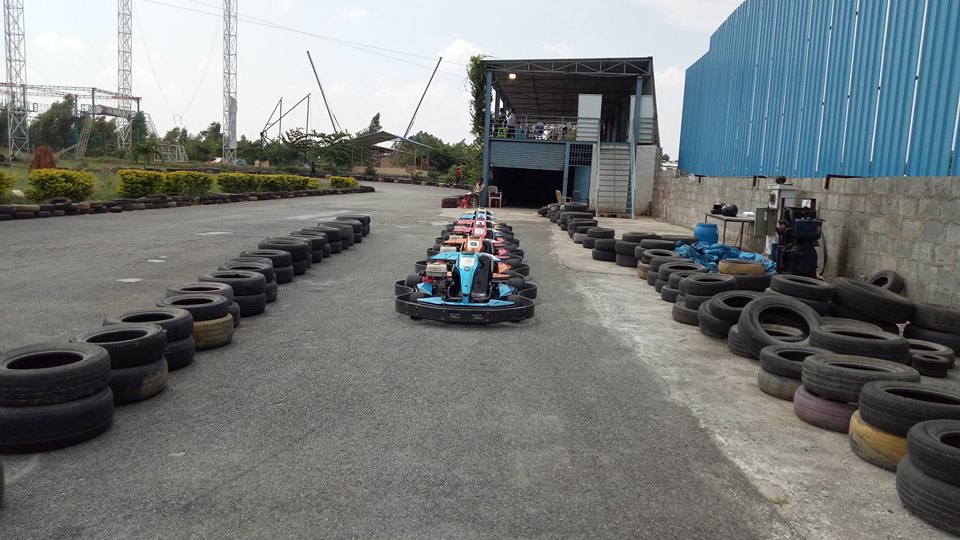 Go-karts lined at the Pits 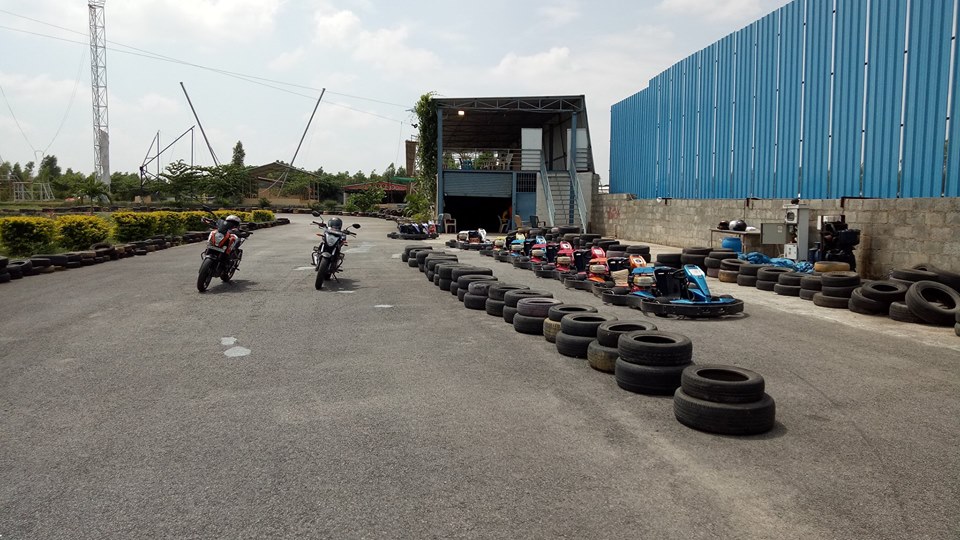 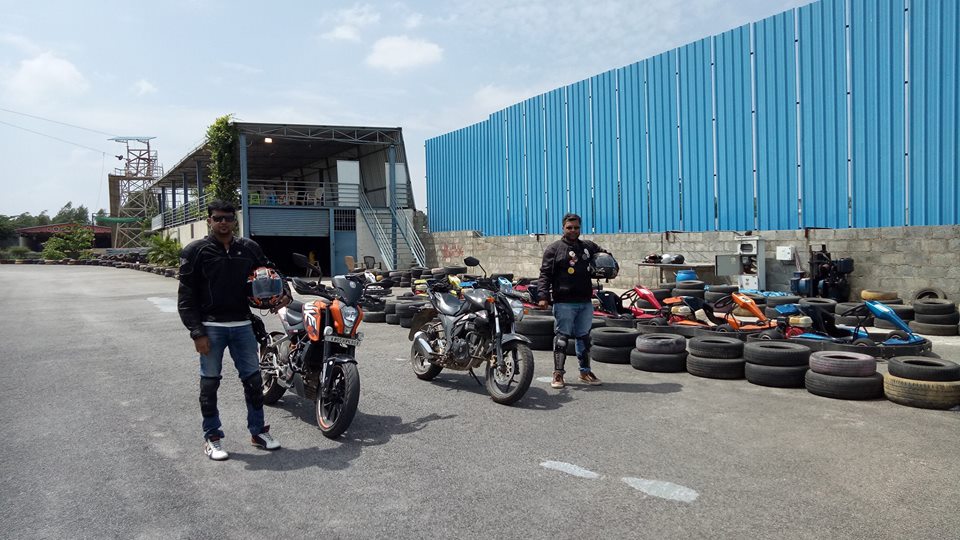 The “Reaper” and “Soul Warrior” with our machines

We first completed 12 laps of karting and straight into the pits and parked those karts. 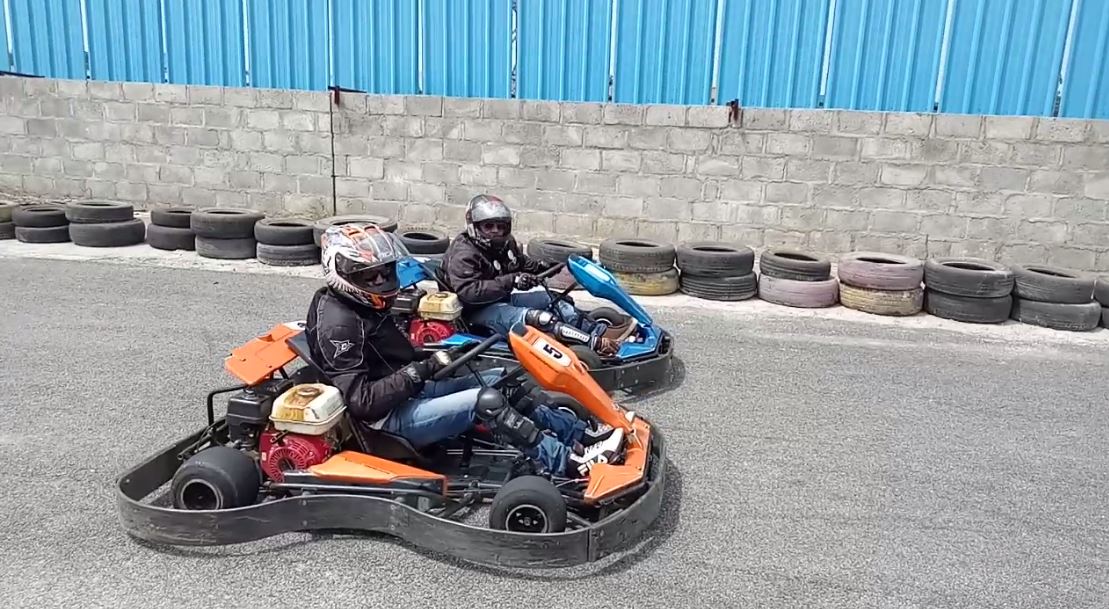 After Go-Karting, we rested for a few minutes and hit the track with full enthusiasm. For a few initial laps; I rode at normal speeds just to get a good grip over those corners.

We both rode one at a time so the other could shoot videos and pictures and also record our lap times using a stopwatch. 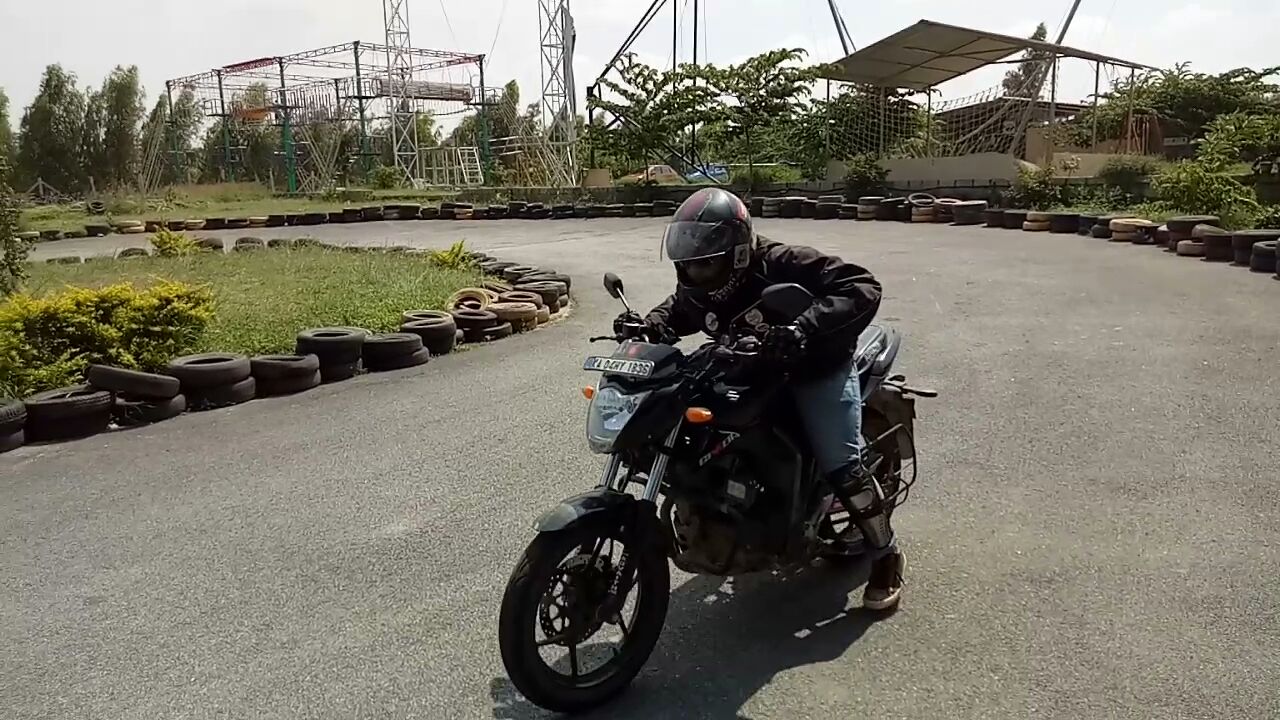 Me at the Start 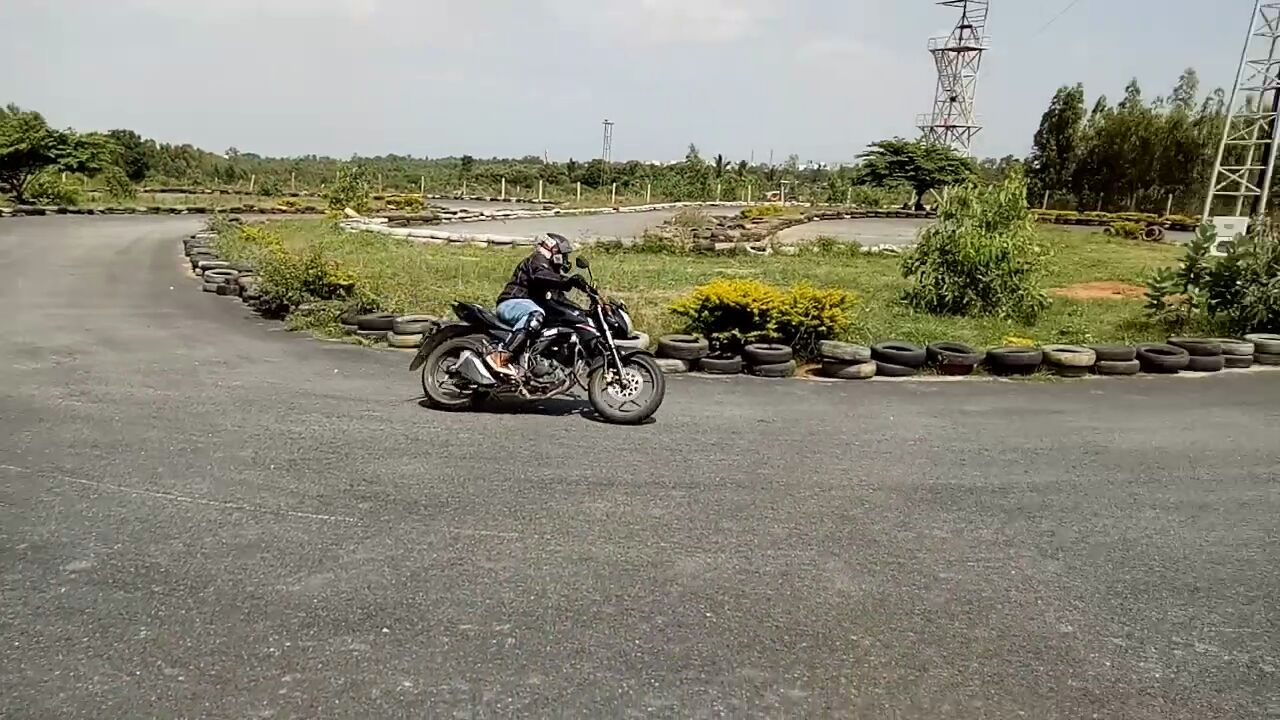 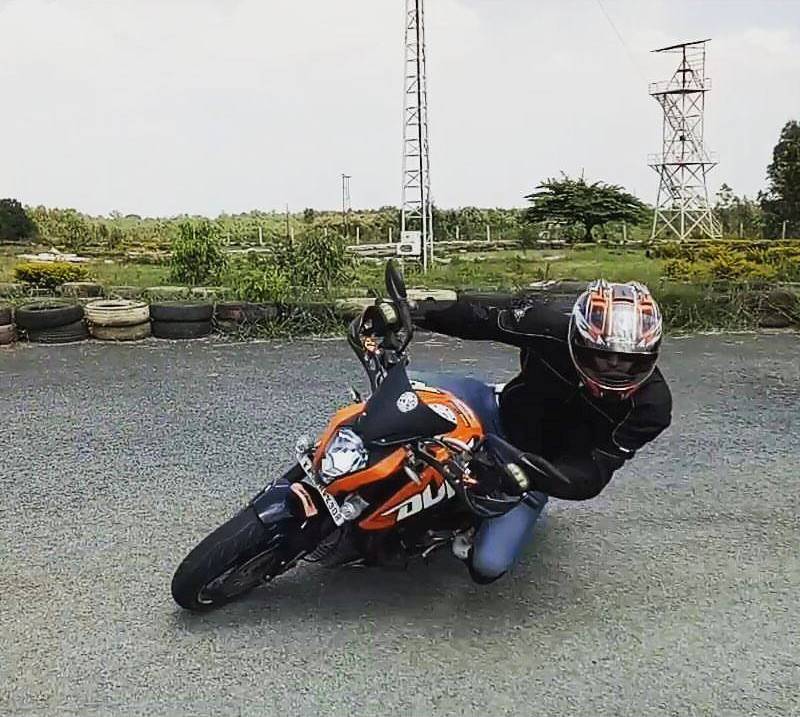 Our Lap Timings as recorded on a stopwatch

It was a good time spent on the tracks.  Discussing the next day’s plan for off-roading to Dabbaguli, we dispersed from Sarjapur post having a chocolate milk-shake.

When #RTBengaluru had their Dabbaguli ride planned; I apparently missed it due to personal commitments. After reading the Motoring Mayhem: RT Bengaluru’s Dabbugali Off-Roader; I was eagerly waiting to go off-roading here, so post riding on the tracks, we planned this off-roader the immediate next day. 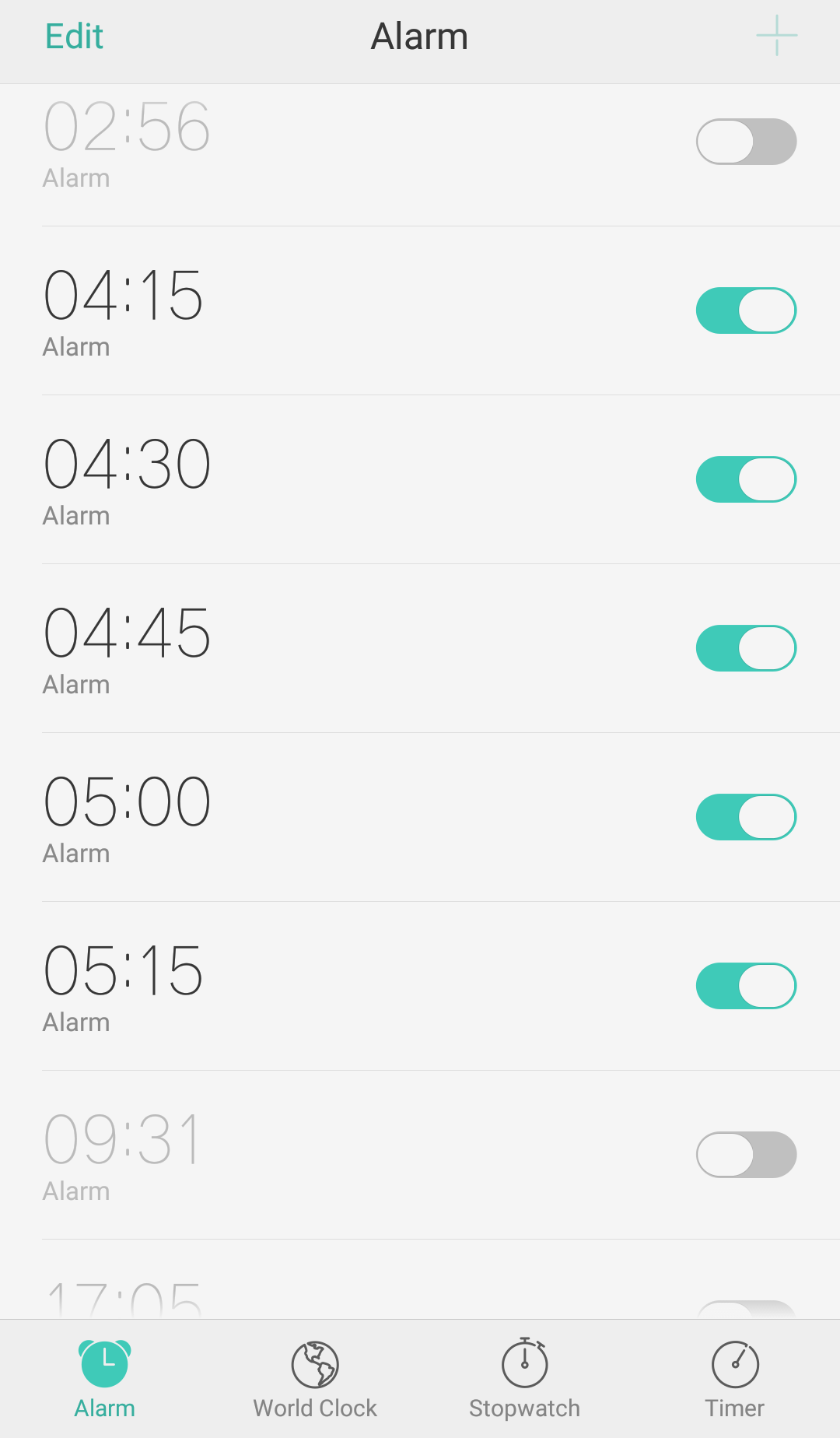 My Alarm schedules for a trip 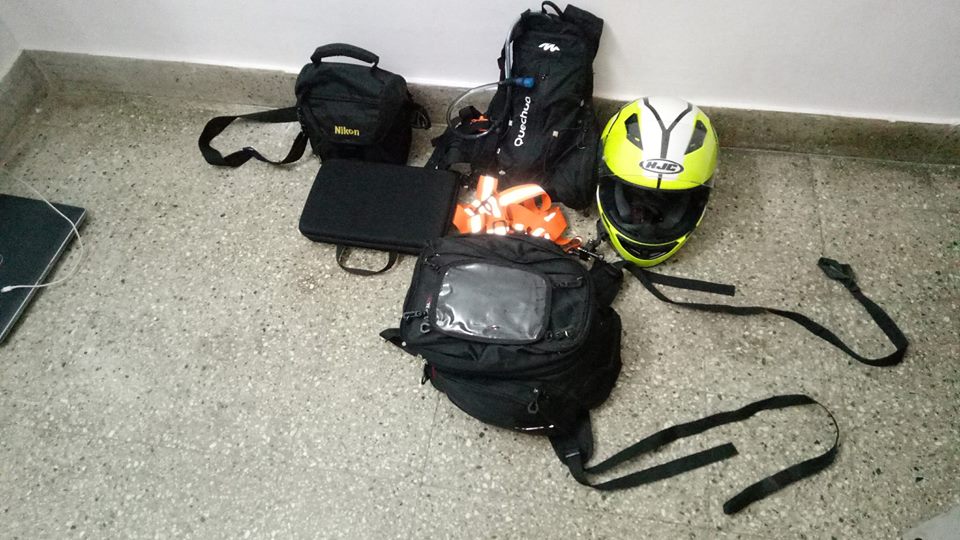 Getting ready for the ride

Shrey, my brother Akshay and I started early from Sarakki Market near Banashankari and took the Kanakapura road.  After dodging off the dusty under Metro construction Kanakapura road, and riding through the forest roads we could sight the lake beds full with water.  Thanks to the heavy rains that lashed Bangalore during the last few months.

RK Bhai from #RTBengaluru had sent me the GPS coordinates and all three of us quickly got them saved as off-line maps and even then we missed our paths.  If you are on an exploration ride through forests and village routes, never rely on GPS maps as Google Maps will keep saying fastest route and you will see yourself lost in the middle of nowhere.

Please be aware that GPS will show Dabbaguli which is near Magadi and don’t get confused with the same identical names.

This Dabbaguli is after Kanakapura and at the borders of Karnataka and Tamil Nadu.

Upon reaching Hunasanahalli we took a left and kept riding a few kilometers and entered the geographical area of Tamil Nadu.  Upon reaching a check-post we enquired with few locals there, where one of the locals told us that we had taken the wrong road, Literally 🙁

A local guiding us with the route at the check-post. 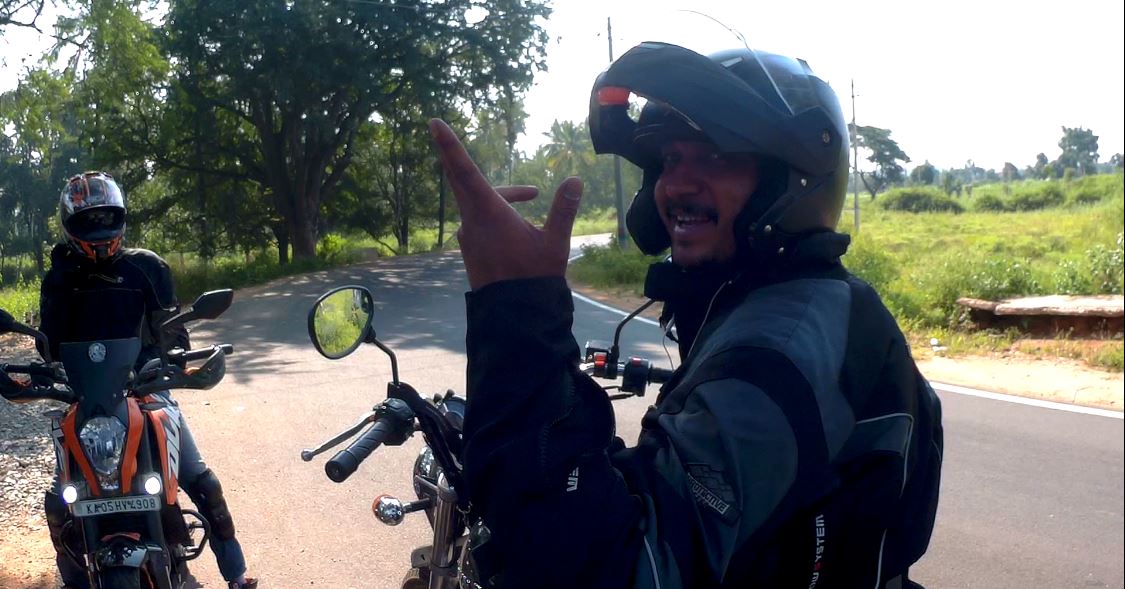 Meanwhile another local said, go back to Hunasanahalli and take a right immediately after a Bank.  Yes, we sighted Bank of Baroda (travelers please use this as a landmark) and take the immediate right and upon riding a few kilometers ahead, another local got onto my bike saying he shall guide us with the exact route till a village, Varanahalli.

This villager got onto my bike till Varanahalli

Upon reaching Varanahalli, another local asked us to follow his bike as he was also riding that way.  It was the beginning of the off-roader, the muddy roads full of small stones; rather say “No Roads” 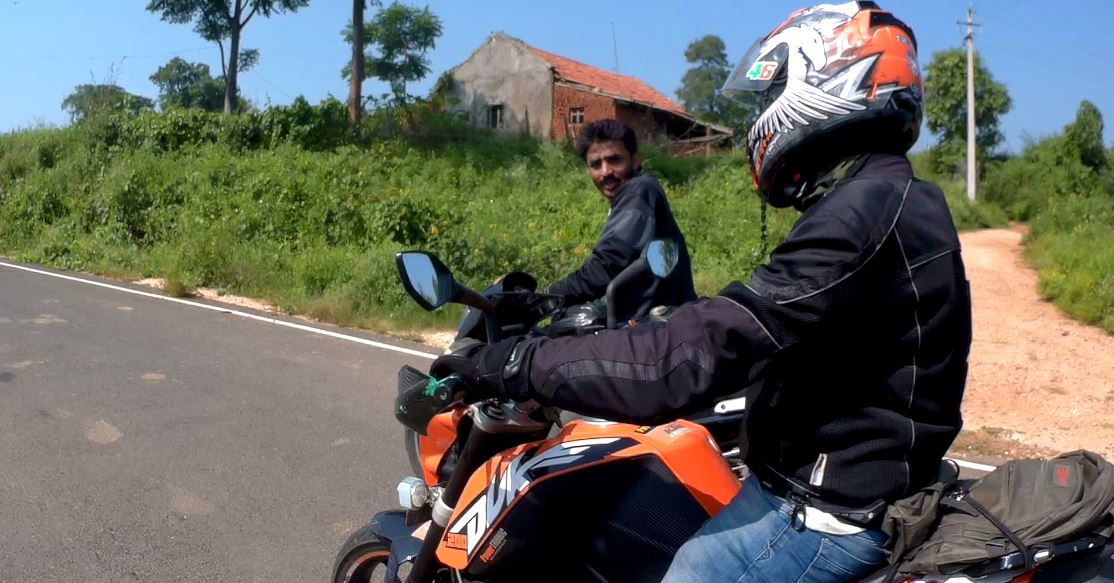 Guiding through the final destination; Dabbaguli

At a deviation, the local instructed the way ahead and said keep riding until you see a temple, that place is Dabbaguli.

We parked our bikes under the tree shades and went for “Chaai” at the only tea-shop there.

Our Machines resting beneath the tree shades 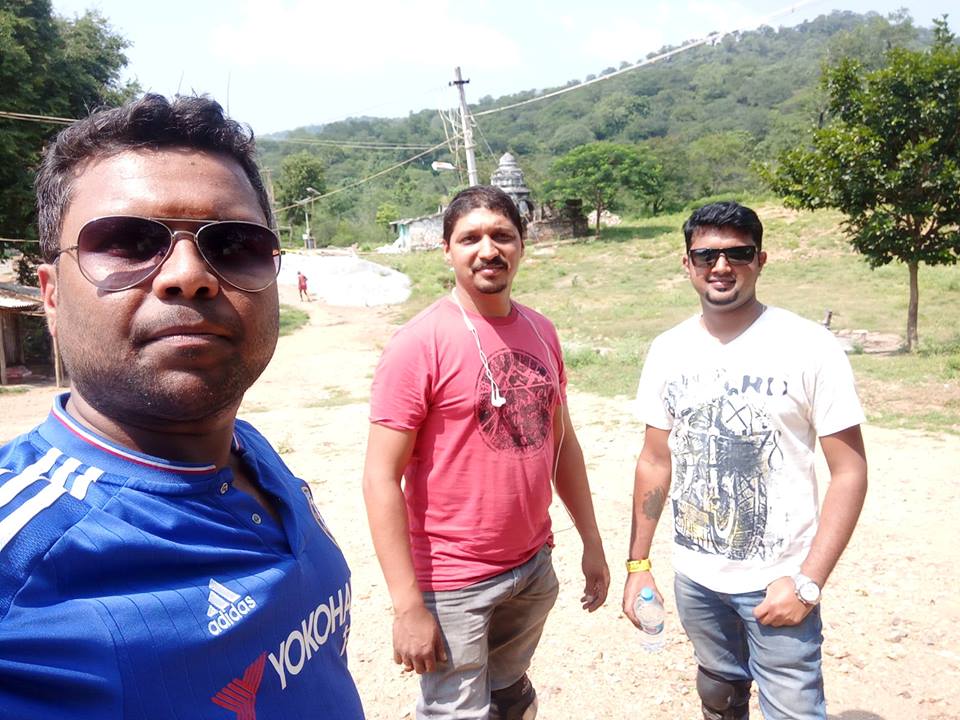 When I have my brother and my friend who got me to Biking world, None of the roads are difficult 🙂

Over the discussion with the tea-shop owner, he said instead of taking the same route back; there is the shortest route through the forest that will take you to Hogenakkal falls.

Post-tea, we had some photo session at the banks of the flowing river. 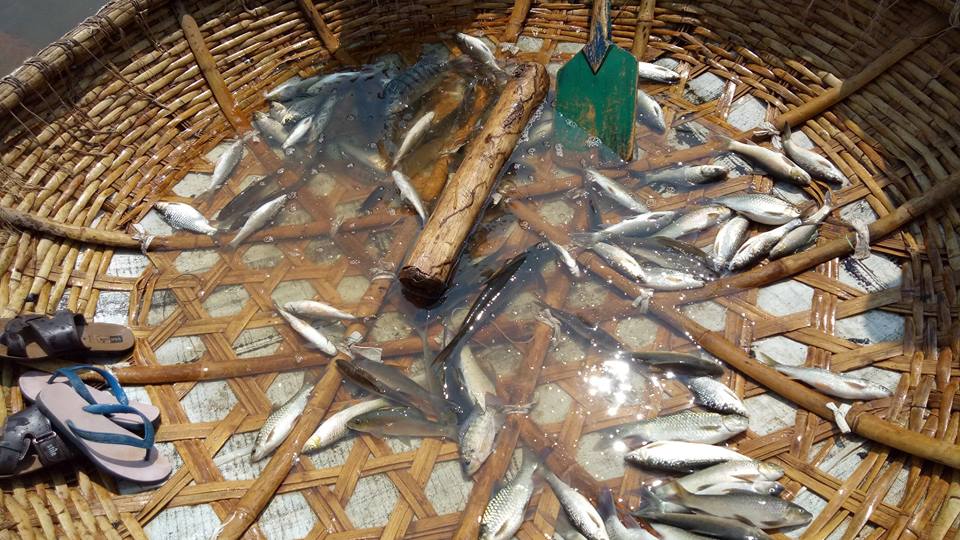 A day’s Fishing by the local fishermen 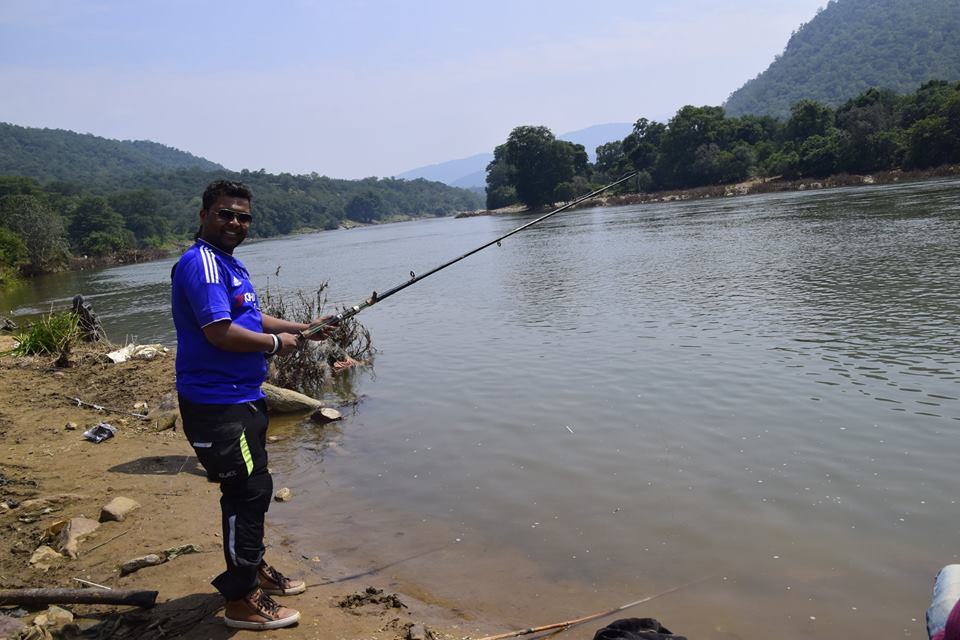 With the Fishing Rod for a picture pose 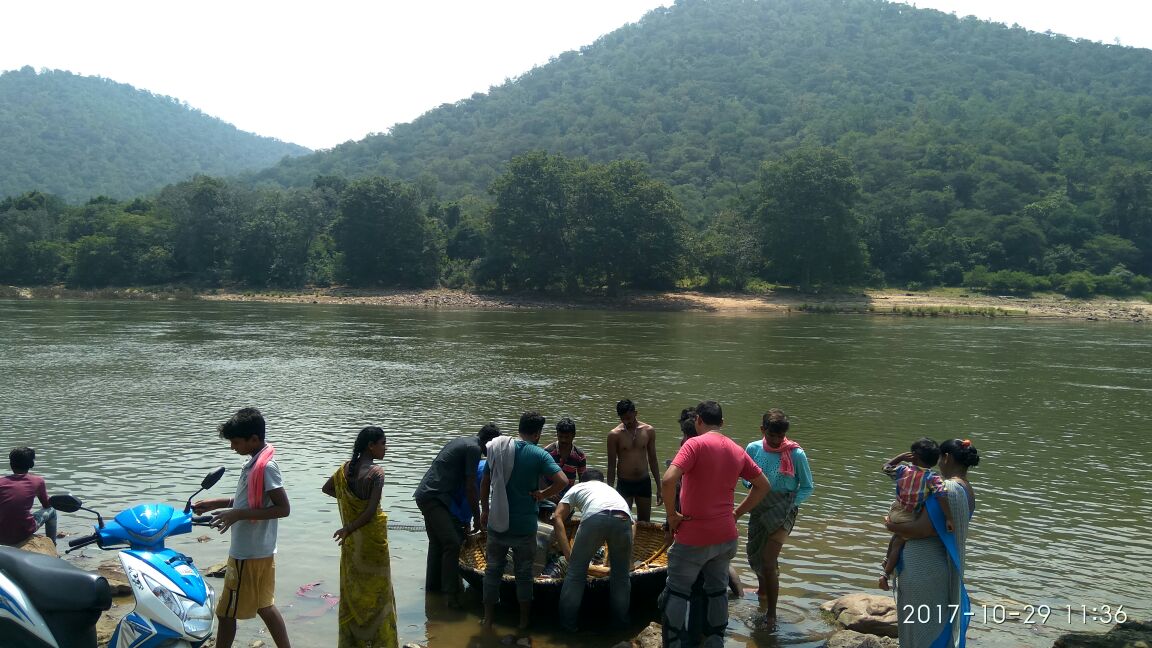 The fishes were sold in a jiffy.  Should we have had a bonfire or something there, we would have cooked fish tandoori !!!

A Panoramic picture of the landscape here 🙂

We took the off-road route that passed parallel along the river; this stretch of no roads was crazy enough.  We had 2 water stream crossing and riding through it was crazier. 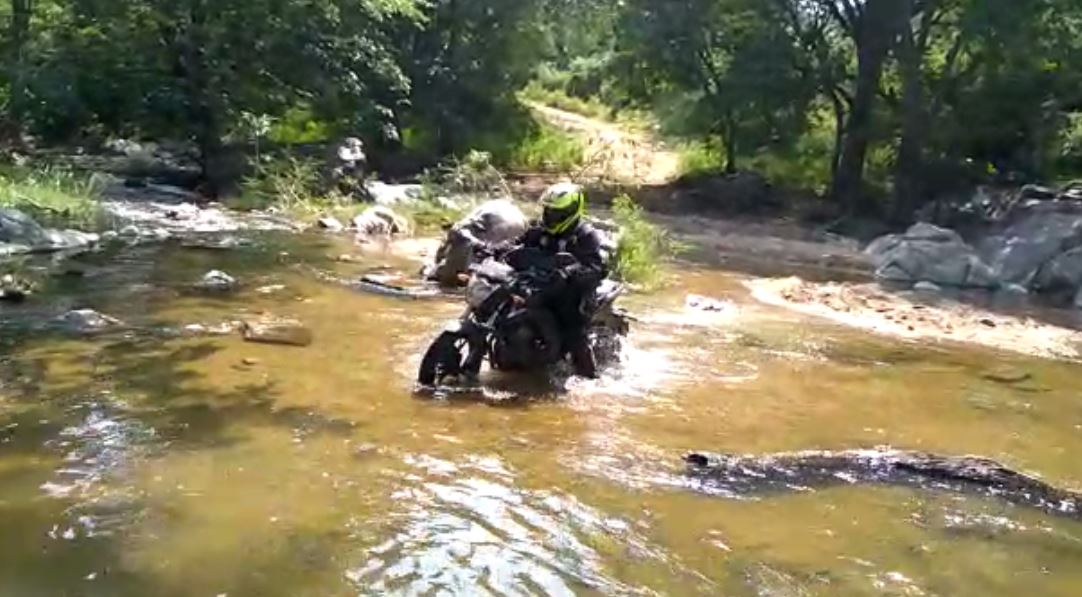 A group of locals after fishing guided us back out of the forest.  As we followed their bikes and reached the village town, a farmer named Krishnamurthy from that group offered us a bag full of groundnuts that he and his family reaped from their farmlands.  A very nice and warm gesture from Krishnamurthy. We were guided and helped by many locals throughout the trip. 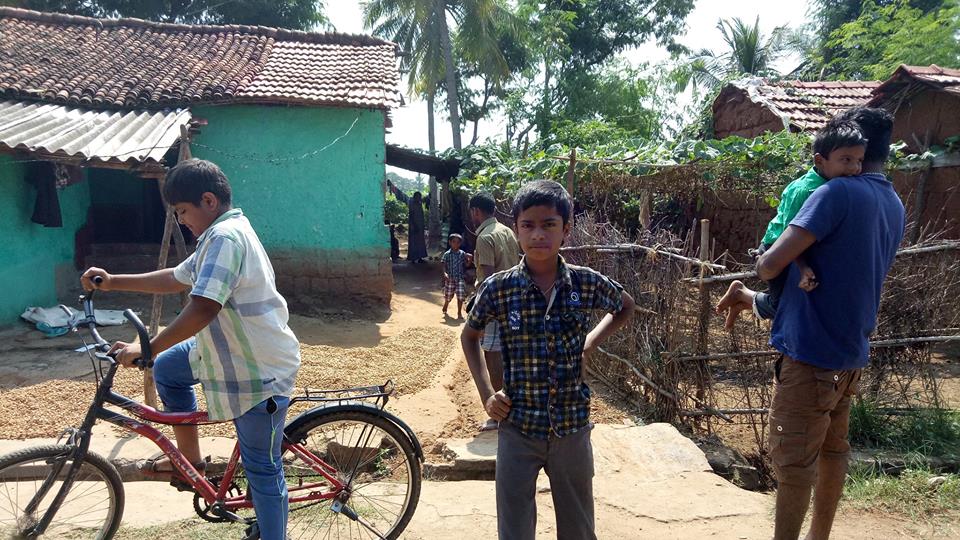 People with “Rich Hearts” never live in Bungalows and Villas. 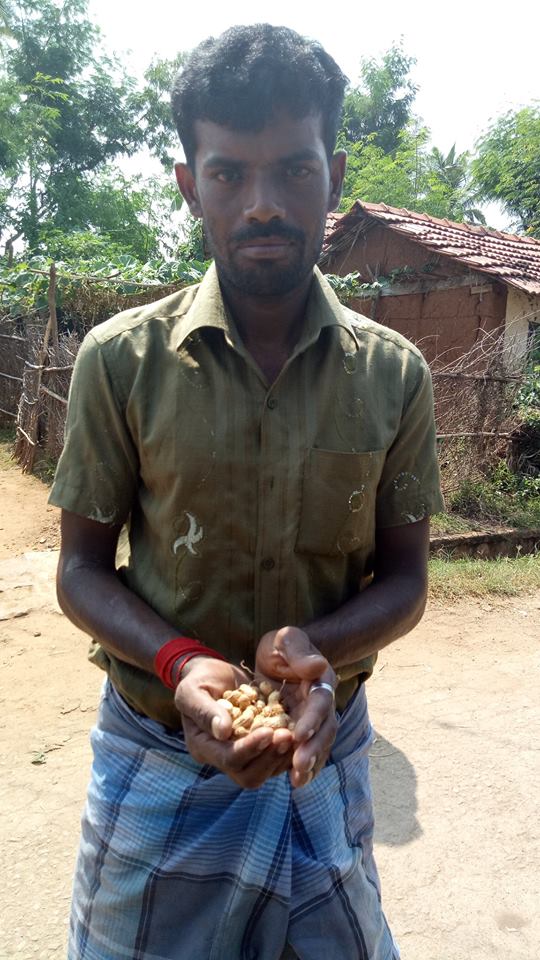 The bag full of groundnuts given by Krishnamurthy

The road from the village limits was good and few twisties downhill until the check-post.  We stopped over for lunch at a roadside hotel in Kanakapura.

We all dispersed from JP Nagar.

That was an amazing weekend; Saturday on Tracks and Sunday with dirt trails. Hence the title “A Weekend Beyond Roads: A Racetrack and Dirt Trails”

Thank you Bhai log for an amazing weekend.
Photo Credits: All three of us. 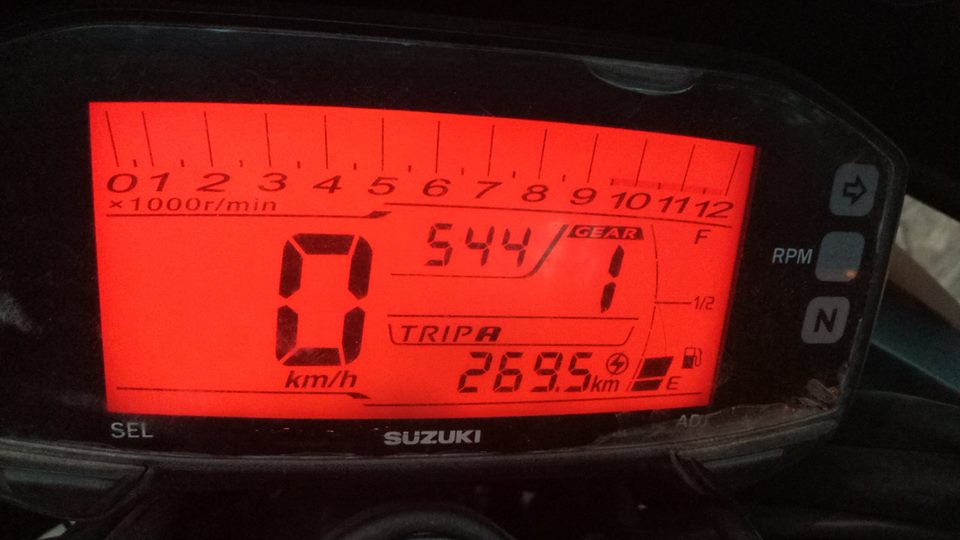 270Kms of a Crazy Ride to #Dabbaguli

Stay safe and stay tuned until I blog my next Travel Story.
#LiveFreeRideHard