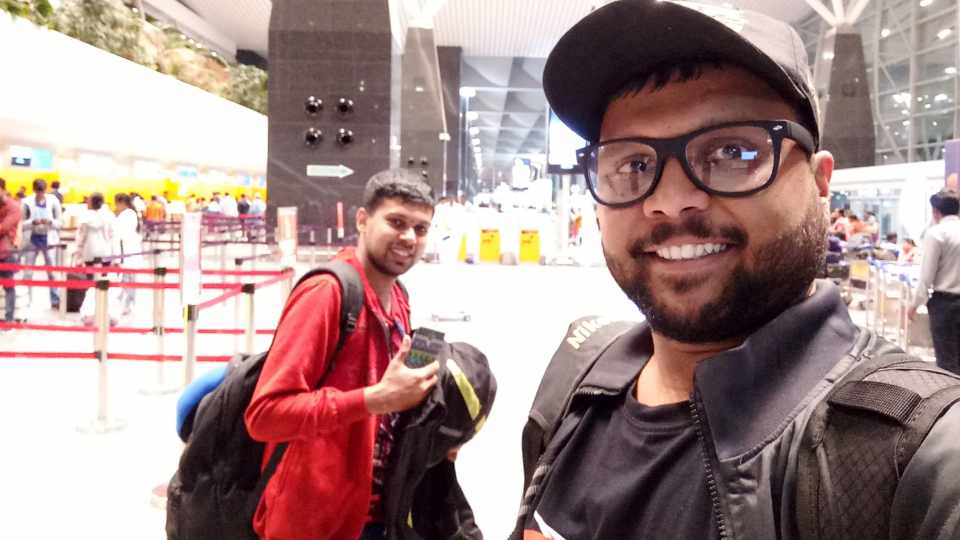 Monster & Warrior got Leh’d | Episode 01: Towards Delhi, The Start |

The complete Leh story; is split into multiple series of blog episodes, and is titled; Monster and Warrior got Leh’d.  The rationale behind the title is the names we have given to our bikes. Phani has named his bike; Monster, and I have named my bike Warrior.

After my unsuccessful Leh trip in 2017,  I was eagerly waiting to finish my long-pending dream ride.  Phani and I started our planning somewhere in the mid of March.  Every day, post the office hours, we caught up at a bakery near Phani’s office to plan the things.  Both of us got our leaves approved for the trip; and by mid of April’2018, we had our flight tickets booked to Delhi.

Once the flight tickets were booked, all other preparations would line-up accordingly.  We took assistance from Rigzin Bhai for the Inner Line Permits (ILP is required for few places in Ladakh).

We didn’t have to shop for the riding gears this year as we had purchased all those items last year. This time we wanted to get the Ladakh carriers for our bikes, such carriers for a non-RE bike are not available in the market, hence, we decided to do some custom design work and get it fixed on our bikes.  To do so we enquired a couple of fabrication shops over the weekends and then I came across a small fabrication shop in JP Nagar, Bangalore.  Phani and I skipped office for a day and sat at the fabrication shop the whole day.

Since both our bikes’ (Gixxer and Dominor) have fiber parts, mounting for the carriers needed specific customizations and the first carrier we did here in JP Nagar looked like a box on my bike.  My bike looked like a workhorse.

However, the hunt for a Ladakh carrier was still on!! Then, Phani came up with a design and we soon rushed to JC Road, Bangalore.  We purchased top rack which is basically used for Royal Enfield and rushed to Zakaria Engineering works (a welding and fabrication shop) in JC Road and got it fixed as per our bike’s requirements.  We also did a rough sketch for Jerry Can holder and the fabricator prepared the holder as per the sketch we gave him.  We wanted to make sure that the carriers could easily be installed or removed with few basic tools, such as spanners. A flag mount was also welded to the carriers so we could ride with the flags fluttering high.

We wanted to test the carriers on an off-roader. So,  Phani and I went for an off-roader ride to Kailasagiri. To test this out, we filled the jerry cans with water to check how the overall carrier and jerry can holder would sustain in those terrains. We also purchased helmet intercoms and tested their range in this short ride.

In mid-May’2018, I got a similar carrier and jerry can holder customized and affixed to my bike at the same place in JC Road, Bangalore.

We had to paint those carriers, so we purchased some black spray paints and on the road in front of Phani’s house, dismantled the carriers and painted them under streelights.

Both of us got a message board done at the same place which read “Always give way to Ambulance, you cannot give life, but you can save a life”

The next major thing was bike transportation and we started all the necessary inquiries.  We had bitter experiences in 2017 when we shipped our bikes by Indian Railways.  So, we wanted to look out for other logistic options.  During, the same time, one of my friends, Tejas, was moving to Pune and he had shipped his bike via Pikkol and he was happy with the services offered to him. Both of us enquired with Pikkol and got a quote and all the details for bike cargo.

During Leh’2017; we had carried all the tool-kit and riding gears with us in the flight and it was a real hassle to manage all the baggage, so we negotiated with Pikkol to give us 2 extra cartons so we could send our riding gears, tool-kits, engine oils, and all other lubricants along with the bikes.

Our bikes had to be serviced properly before we handed-over our bikes to cargo.  During the end of May and the first week of June, Phani and I had office work deadlines and we knew we wouldn’t find time for any ride preparations so we ensured most of the plans were fully executed. By the mid of June, we had to hand over our bikes to Pikkol for packing.

Just a week before the shipping, my bike’s carburetor float pin and the bike’s rectifier had to be replaced because of some issues.  Along with those replacements, I got my bike fully checked from a mechanic near my house and post a full service, we dropped our bike for packing.

Both, mine and Phani’s dad were more enthusiastic about our Ladakh ride than we both were.  My Dad started to read a lot of stuff about Ladakh on the internet and kept updating me with the current news and happenings there.  He also kept on following-up with me on my bike’s service and ensured I wouldn’t forget even the minutest thing. He said; last year you guys had forgotten the Oxygen Cans, so first purchase the Oxygen cans for both of you and then carry with the rest of your preparations. While Phani’s Dad grabbed a screw-driver from Phani’s tool-kit and helped him in fixing his bike.

The time flew and the day of our bike shipping arrived.  All the riding gears, tool-kit, spares, cables, flag rod, jerry cans, oil, and lubrication were packed in the cartons and our bikes being fully packed with 3 layers of packing materials; plastic, bubble wrap, and cardboard.  Having done with all this, most of our preparations for Leh were all finished and executed.

After all these major preparations, over the weekend,  I went to my hometown Belgaum and relaxed.  Initially, Pikkol agreed to drop our bikes and the cartons to one of our friends; Narayan Bhai’s house in Delhi (Narayan Bhai heads our Road Thrill – Delhi chapter). But, Pikkol refrained to deliver the bikes and cartons to Narayan Bhai’s house saying some road work issues and we had to collect them from their warehouse at Chattarpur, Delhi.

The only few things that were pending were a BSNL Postpaid Sim,  First Aid Kit, Basic medicines and some minor shopping which we did from Metro Cash & Carry and from other local medical stores.

Wishes of Good-Luck and Safe ride started to flood in our Social Media handles. Thank you, everyone, for the good wishes.

After all the planning, preparations; the day to begin the journey had arrived.  Yet again, both Phani and I skipped work and packed our baggage.  Along with our baggage, only our helmets were to be carried which I packed it in a cardboard box and kept it ready.

In the evening, we received a message from the flight operator which read; The flight is delayed by an hour!! (actual departure time was 11.55pm). One of my known drivers; Murthy picked me up at my room and we reached Phani’s house.

We met JP Bhai at Esteem Flyover, Hebbal and collected a Road Thrill Flag for Phani’s bike.  Meanwhile, Road Thrill Bangalore and Hyderabad had successfully completed their Ladakh ride and had reached Chandigarh.

As we reached Bangalore Airport, to our surprise, Karthik and Hemanth Bhai had come to bid us good-bye.

Post the initial security check and baggage scan, we got our boarding passes and the message on the display board read; “The flight is delayed for 1 more hour”.  So, technically the flight would take off at 2 AM.  The excitement, anxiety started thumping within us.

Post the final security check at the airport, we rushed to KFC at the food-court to fill our tummies.  We had 4 more hours to spend at the airport before the departure gates opened and what do we do?

This monkey (Phani), logged into his office laptop and started office work.  I said: OMG!!! Work from the Airport in the middle of all the excitement, Have you gone insane?

How could I forget, it was FIFA World-Cup season and the big television in the airport, telecasted Belgium vs England football match and I was fully engrossed in the match.

As the departure gates opened, and people formed a queue; I realized; I had lost my Boarding Pass!!!! Phani got hyper on hearing this, He yelled; “All the luggage stickers are tagged to your Boarding Pass, You don’t giggle;  go search for it”.  I started searching for my boarding pass; I was like a sniffing dog searching for it here and there looking on the floor. I ran back to the table near the KFC counter and asked the housekeeping staff; if they saw a boarding pass there on a table.  To my luck, the staff had found the boarding pass and kept it safe at their counter. I sighed relief as I received the boarding pass and then thanked the staff for their kind act and rushed back to the departure gate.

Finally, we boarded the Air Asia Flight.  As we were the last in the queue to enter the flight, there was no space in the in-flight luggage compartments and we had to keep our backpacks and camera bag on our lap.  Looking at this, two of my co-passengers gave me a bizarre look, maybe, they thought it was our first time on a flight!!

It was 4.40 AM when we landed at Delhi Airport.

The big crazy and an adventurous ride was about to begin….

A Glimpse from the next Episode: