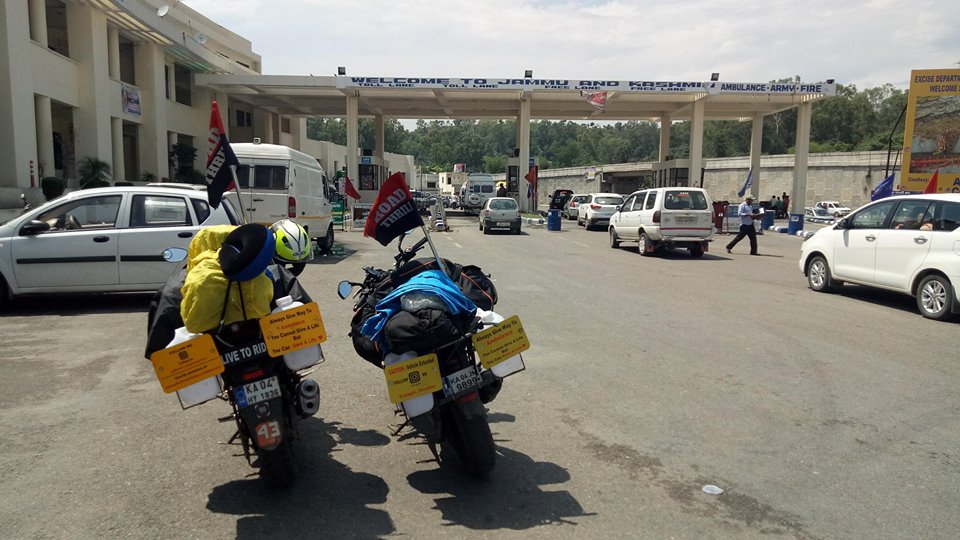 Hope you have read the previous Episode, in case you haven’t,  Click Here to read Episode 01

In Episode 02, sharing our experiences as we ride towards Jammu & Kashmir.

It was 4:40 am when we reached Delhi and we hurried to the conveyor belt to collect our luggage.  Amidst the crowded Delhi Airport, it took an hour to get our baggage and reach the airport’s taxi stand.  We quickly booked Uber cab till Pikkol warehouse in Chattarpur.  As soon we reached, I asked Phani to unpack our bikes while I went in search of petrol pumps.  In Delhi, petrol is not sold in cans or bottles; but somehow convinced the petrol pump attendant, he agreed to pour only 2 liters of petrol in plastic cans.

Meanwhile, Phani called me and informed about the damages to our bikes during transit. My bike, Gixxer’s main stand, and the top carrier rack were broken; while Phani’s bike (Dominor) had a bent clutch lever along with a bent side stand. We unpacked the cartons and fixed the jerry can holders and saddled our bike with all our luggage.  There was a Sintex water tank there inside the compound,  we grit our teeth and washed our face from the tank’s water and geared up in a factory warehouse nearby.

We started from here and luckily as we exited the warehouse compound, we found a welding shop where we mended my bike’s top carrier by welding the repair points.  As my bike’s main stand was broken and had to be either fixed or removed; which we got it removed at a local garage near-by.  It was already past 10:00 am when we started from Chattarpur making our way to exit Delhi.

Somewhere, on the city roads, we saw an information board which read India Gate 5 km with a symbol turn right.  Phani spoke on the Intercom; bro let’s visit India Gate and flag-off the ride from there.  It was around 12 in the afternoon, we reached the India Gate.  Both of us had only seen the India Gate on television channel Doordarshan; which telecasts the Republic Day Parade every year.

The cops allowed us to take pics of the India Gate along with our bikes which they had initially denied.  The cops also said that we can ride till the Parliament House and then continue your journey ahead.  While we rode on the Rajpath; I could visualize the Republic Day Parade in front of my eyes and it was a proud feeling to ride on this stretch of 2 km.

By 12:45 pm we started riding towards Delhi exit.  Somewhere, we saw a juice cart and stopped to have some mosambi juice.  We were fatigued and hence parked our bikes on the service lane there and both of us slept on the road-side footpath; turn by turn for half an hour each. The foot-path was the bed and the Blue Tarpaulin sheet was the bedsheet.

The best part of a road trip; you can interact with anybody on the road.  Looking at our KA registered bikes; few people excitedly conversed with us asking about our trip and general talks.

The ride continued on the Delhi – Chandigarh, NH44 and we stopped for lunch at a highway-side dhaba at around 4:00 pm. It was a relief to our hungry stomachs and as we had cleared through the chaotic Delhi Traffic, we picked up good speed on the highway and as we crossed Panipat, heavy rains lashed on the highway.  Inside the shelter of an HP Petrol Pump on the roadside, we wore our rain liners above our riding gears and continued riding till Kurukshetra.

I had spoken to Arun Bhai from Road Thrill Bangalore who along with the riders from Hyderabad chapter were returning back to Delhi from their successful Leh trip. They had stopped for chai at Mannat Dhaba on the outskirts of Kurukshetra. It was a pleasure meeting our extended biking family members as we exchanged greetings and memories from their Leh Journey.

The sun had already set for the day, we stopped for dinner at Sethi Dhaba and rode till Ambala and checked-into Hotel Surya which we booked upon reaching the city.

Early morning, post chai and getting ourselves ready and saddling up our bikes; we continued our journey on the NH44 and we stopped for breakfast at Kiran Dhaba in Jalandhar.  The dal-tadka here was amazingly delicious.  You know you’re in Punjab when you’re served with a big glass full of milk along with the breakfast.

Somewhere, before Pathankot, my bike’s battery started to give an issue.  The mobile charger on my bike wasn’t working.  We stopped at a roadside shop and Phani was trying some jugaad to fix this issue.  We stopped at Happy Paaji’s shop and Paaji helped us with his ideas and tools to fix the wiring issue.  Happy Paaji, served us chai that worked as energy boosters to our exhausted mind and body.  We took good rest here and continued our ride ahead towards Pathankot.

Somewhere, few km from here on the highway; my bike’s horn started honking and didn’t go silent, Thanks to Phani’s jugaad, haha!!.  He goofed up with the wiring of the horn and it went crazy!  We pulled over on the side of the highway and Phani disconnected the incorrect wiring.

We soon reached the Jammu & Kashmir state check-post.  As it was Leh season for biker’s and Amarnath Yatra season for pilgrims, the check-post was heavily crowded.

As soon as we crossed the check-post we stopped to have some lime juice and daal Wada (local Jammu snack). We stopped at Indian Oil Petrol pump for fuel, and one local suggested us a shorter route to Udhampur via the Sambha Forest and passing through Mansar Lake.

We deviated at Sambha Forest check post; the twisty ghat section started from here with ascending hairpin curves, the roads passed through beautiful green forests but it was dotted with lots of potholes and patches.

We reached Mansar Lake which was 25 km from Sambha check-post and rested for a while in the garden near Mansar Lake.  The beautiful lake was fringed by forest-covered hills and the fishes would come to the shore where the tourists fed them.

Though the place was crowded, we didn’t pay much heed to the crowd and took a peaceful nap on the lawns there. Post having some snacks and chai at the canteen nearby; we continued our ride towards Udhampur which was around 40 km from the lake.  The shortcut via Sambha was a by-pass for the town of Jammu. Riding through the dense forest ghat section and passing beneath many Railway bridges; we finally reached Udhampur by 5:30 pm

Over a chai, Phani and I had a discussion; whether to ride ahead till Ramban or to halt at Udhampur and decided on the latter and started to look out for a hotel on the highway outside the city.  Unfortunately, we took the service road on the highway and reached a dead end. The road was inclined and I stopped parallel to Phani and he lost balance on his bike and started leaning towards my bike.  Both of us, couldn’t control our heavily loaded bike and fell along with the bikes.  My bike’s petrol started spilling on the road.  Few locals near-by, assisted us to pick our bikes and helped us to get back on our feet.

Though the fall was very minor, the impact; my bike’s rear brake lever was bent and a bend on the flag rod on Phani’s bike.  Maybe, it was our bikes’ way of telling; Boss we are done for the day!

As daylight was engulfed by darkness and we had to ride on the under-construction road amidst heavy dust and heavy vehicular movement.  While on this dusty road, an insect hit my eye; I quickly stopped on the roadside, wiped my eyes and continued riding until we reached Hotel Tawi View. We quickly booked a room here and took all our luggage to the room.

Because of the highway construction; the hotel rooms were dusty, but that was ok, we only needed a place to rest for the night.  Post dinner; we met a couple of bikers staying in the same hotel; they were on their return journey and they said the road ahead is pathetic until Srinagar.

After a quick dinner, we crashed on the bed; it was a tiring 14-hour ride covering 444 km for the day.

The most excited discussion during the time between us was riding through the longest tunnel in India the next morning.

A glimpse of the next episode:

To be continued in Episode 03: The Heavenly Kashmir Valley, The deadly Zoji La Pass and our homage to the Fallen Heroes of the Kargil War