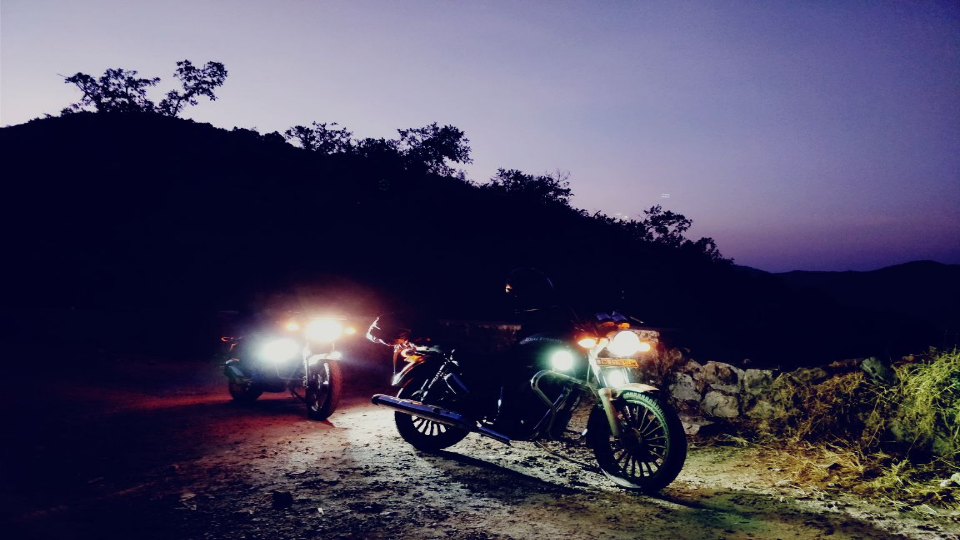 Sunrise at Charmadi and Sunset at Agumbe . . . How we rode 860 kms in 26 hours through the dangerous Ghats of Karnataka

We covered two deadliest ghats in Karnataka’s within a span of 26 Hours.  Akshay and I had some personal family work at Manipal. So, we planned to ride.

19th Jan 2018: Post logging out from office, Akshay and I met at a bakery near my office. Akshay was fully geared up and ready to hit the roads. I convinced the bakery guy that I would go to their kitchen and get myself geared up with my riding attire, for which the bakery guy agreed.

By 9.30pm, we were fully geared up and started from KR Puram. Riding through the chaotic weekend traffic; we managed to cross the Nelamangala toll and deviated on Hassan highway where we stopped at the first petrol pump that came our way. We fueled our bikes and got the tire pressures checked there. It was 11.15pm by the time we departed from there.  It was winters and the climate was chilling.

We stopped at Hotel Empire in Kunigal for dinner and followed by a power nap there on the bench. The mixed fruit juice here is delicious. We continued riding towards Hassan in the dark; both of our bikes had fog lights fit that helped our gaze through the dark roads.

Somewhere near Udayapura (few km before Hassan), we stopped over for tea at 2.30am. We took yet another pit-stop at Belur before we entered the forest ghats towards Mudigere.  As Shiradi ghats were closed that time, all vehicles moved via this stretch.

Riding on the single lanes that passed through the thick dense forest was quite tough due to some reckless badass truck drivers that were plying on this route and adding to this, we were sleep deprived.

We stopped at a roadside hotel at Mudigere to sip hot tea and eat some biscuits.  The hotelier had lit a bonfire alongside the road; we sat there in the warmth of the bonfire.

I was hell tired and sleepy. Besides the hotel, there was a house with open gates. I walked into the house compound and slept on a couch that lied in the verandah, while Akshay slept on the chair beside the bonfire.

I woke up at 6 am and walked towards my bike, and to my surprise, I saw my helmet fully wet with the droplets of dew. We grabbed some tissue papers and wiped the visors of our helmets, as we had the deadly Charmadi ghat ahead and riding safely with crystal clear vision was our utmost Priority.

As we rode downhill of the Charmadi ghat, we could see the first light of the sun hitting one of the lush green mountains. The view was serene and beautiful.

We carefully rode the downhill of Charmadi ghat, while we relished the mountains. We soon reached Belthangady at 7.30am, we had tea here at Akshay’s relative house. Post some tea and some casual talks, we made our way riding towards Udupi.

Then, Google map acted silly and took us to a different route.  However, it was a blessing in disguise, as we reached the very famous St. Lawrence church at Attur near Karkala. We quickly clicked our photograph here and continued towards Udupi – Manipal.

We quickly made our way to Manipal which was approx. 40kms from Karkala. As reached, we booked a hotel room where we rested for some time.

We quickly finished our work there, had lunch in the nearby hotel, meanwhile over lunch, I just scanned through Google map to check the best possible route to Bangalore. I think we were lucky that day!! Just 60kms away from here was Agumbe and its deadliest ghat, we both were very excited to ride and make the most of it.

It was 5 pm when we started from Manipal. We maintained good speed and by dusk, we were at the base of Agumbe.  The proper tarmac roads of Agumbe ghat and the nice cool breeze made our ride even more smooth.  Be careful on the sharp hairpin curves. As we passed through Sringeri, the darkness took charge over the red-orange sky.

At a point, where we stopped; Akshay said there should be the shortest route and we can save few kilometers and time, let’s go that way!!!

The shortest route on the map turned out to be a crazy road. The road full of potholes and muddy patches that passed through the dense forest with absolutely no vehicular movement.  We somehow connected to the main road that reached a small town where we stopped for tea and had some jackfruit chips.

We soon reached Belur, the next stretch of the road was the 4 lane Hassan Highway.  Somewhere, after crossing Hassan, we stopped for dinner at Hotel Pathanjali with the intention of riding non-stop until Nelamangala.

A small pit-stop for chai and at a Petrol Pump after Kunigal and straight made it till Goreguntepalya junction and then we went to our respective homes.

Also visit: The Ride of 3 States