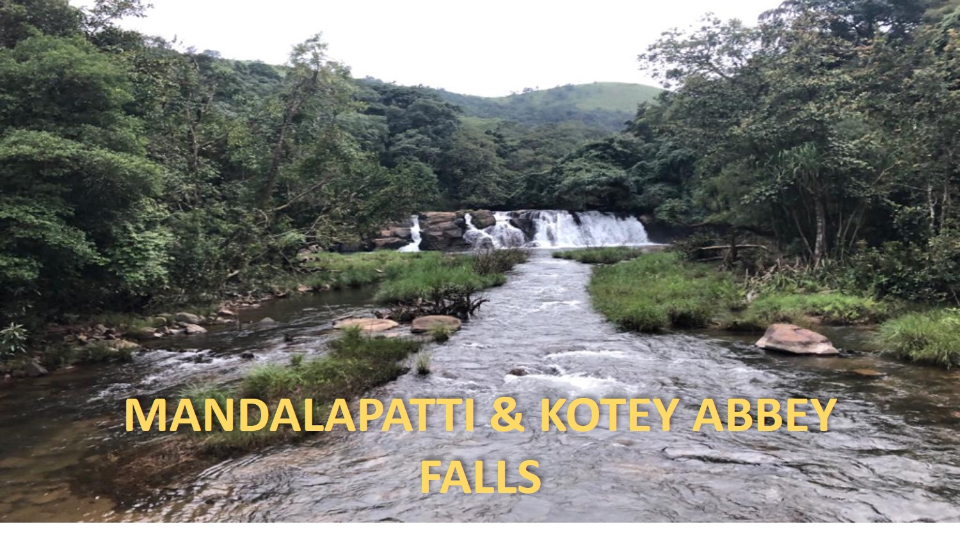 Mandalapatti, An Off-Roaders Paradise in Coorg

The office riding group was itching to ride and someone suggested a Ride to Mandalapatti; an off-roaders Paradise in Coorg. Rahul knew about a homestay at the foothills of Mandalpatti where we could cook our own food, sounds fun ain’t it? And thus we discussed the plan and shared the details in our WhatsApp group.  Soon, we had 10 people confirmed for this trip.

Our usual flag-off point was the Parle Toll.  I got geared up and took the outer ring road to Parle Toll, met Kowshikha (in his car) at Kathriguppe signal and we reached the flag-off point.

Raviraj got into Kowshikha’s car and we continued ahead.  I hadn’t fueled up for the ride, so I quickly got a full tank at the HP petrol pump and joined the group.  A small pitstop for chai en route and then reached Hotel Mayura at Bellur Cross.

While entering the service lane, a local on an R15 was rash riding in the wrong lane, Mohan braked hard and avoided ramming into him.  The R15 rider slid off the road, fell on his face and went sliding into the bushes.  His face bled since he wasn’t wearing a helmet, also had some bruises to his hands and legs.

I had my first-aid kit handy in my hydration bag and gave him some cotton and Savlon.  The local accepted his mistake of recklessness and apologized.  He called his friends to pick up him and the bike back to his home.

Thiru and Tarun were the last to enter the hotel compound and Thiru noticed his bike’s flat tire.  The hotel’s security said; a puncture shop is right beside the hotel, the contact number is on the shop’s wall, call him and request to come early to his shop.

We spoke to him and updated about our flat tire, he said he would take some time as he stays in a far village.  Till then we had our breakfast at the hotel, it was a leisured time on the breakfast table.

Patrick, Mohan, and Deepak joined only till the breakfast point and headed back to Bangalore. 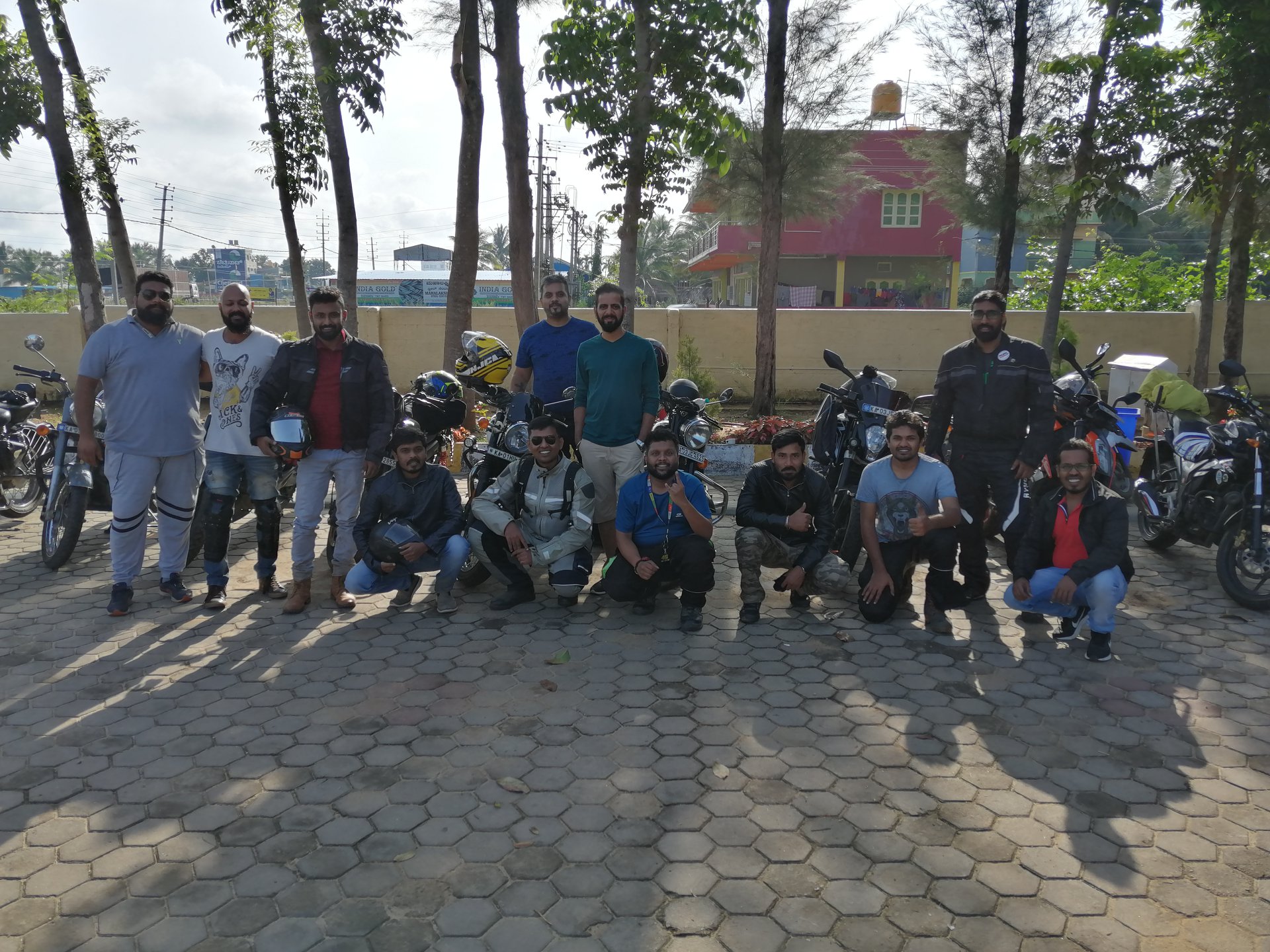 Meanwhile, we kept on calling the puncture guy, he took his own sweet time to reach his shop.  After waiting for 3 hours in the hotel’s parking area, the puncture guy reached his shop and called us.  We towed Thiru’s heavyweight Bullet to the shop.  Bullets usually have tubed tires and it took some good amount of time to remove the rear tire, replace the tube and put the tire back.  The humble mechanic also got coffee for every one of us. 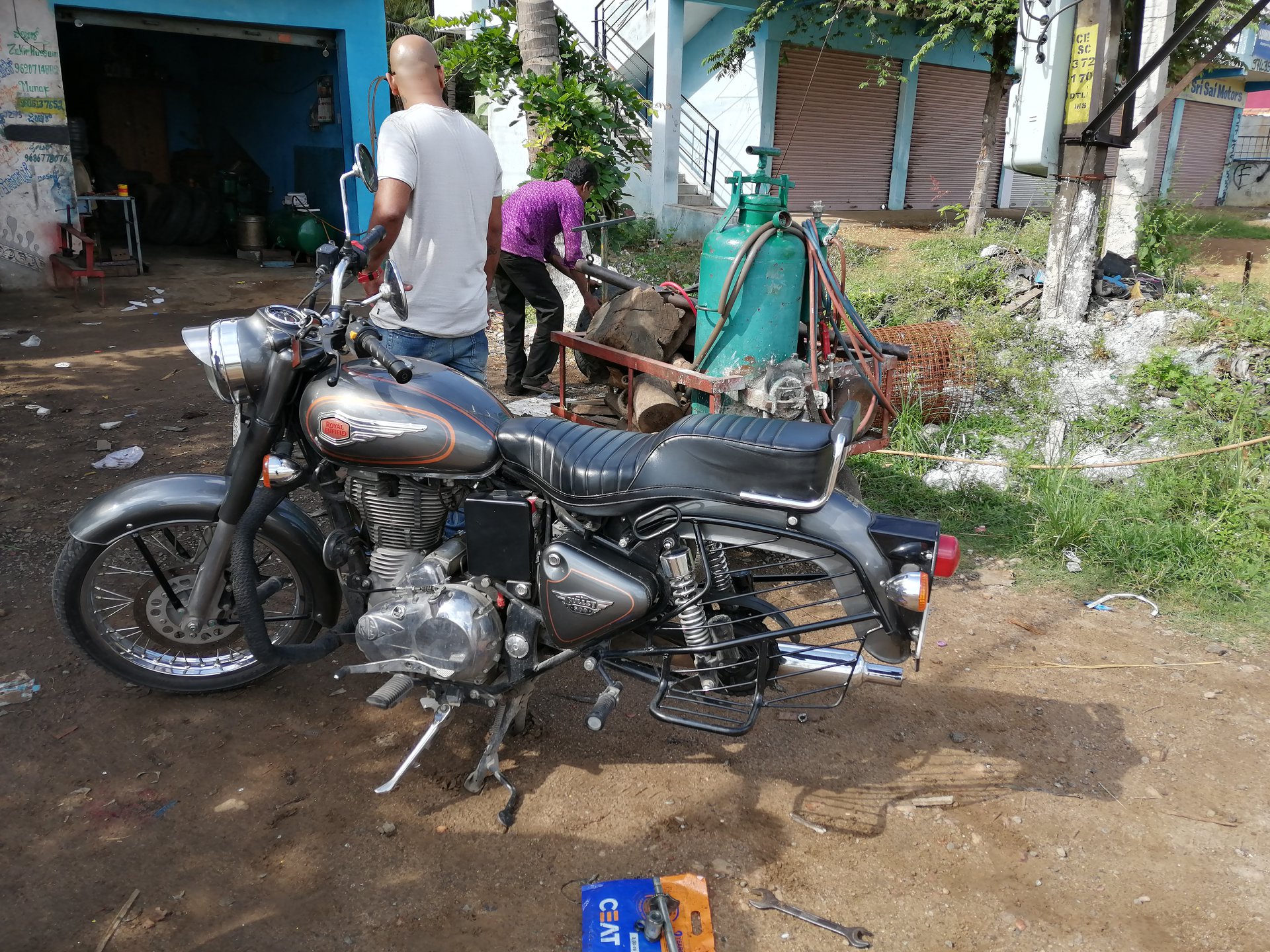 At around 11 am when we continued from Hotel Mayura.  We took a detour at Channarayapatna and towards Hole Narsipura.  From here on, the roads were broken single lanes until Kushal Nagar.  We took ample pitstops for chai, fuel and some snacks until Kushal Nagar.  It was 2.30 pm when we reached Kushal Nagar and we were looking for hotels for lunch.  A local shop-keeper suggested having lunch at Hotel Coorg Cuisine at Madikeri.

The route from Kushal Nagar to Madikeri was through ghats and was beautiful.  Every one of us kept a good pace, throttling it out at every corner.  This stretch took our sleepy mood away, especially after riding on a bright sunny day and on the burning hot air on the highways.

A good lunch is what everybody wanted as we reached Madikeri town and lunch in Coorg Cuisine that served some delicious Kodagu styled food was a nice suggestion.  The food was superb and delicious.

For this trip, we planned to cook our own dinner at the homestay and had to purchase all the groceries, chicken and off-course some booze so we could have a nice ice-breaking session and get to know each other well.

All the things were shopped and dumped in Kowshika’s car.  Our homestay was another 20 km from Madikeri town.  Somewhere in the middle of this stretch, it started drizzling and few of us handed our mobile phones to Raviraj who was in Kowshika’s car.

We reached the homestay; Green Meadows that lied at the base of Mandalapatti (the jeep parking space).

Within no time we dumped all the baggage in the homestay and set towards Kote Abbey falls, this was a small off-roader amidst the mountain.   Somewhere in the middle of this terrain, Kowshika parked his car and hopped on one of our bikes.

It was past dusk as we reached Kote Abbey.  I parked my bike on a small bridge, took off all my riding gears and kept them on my bike, walked down the bridge and jumped into the water. 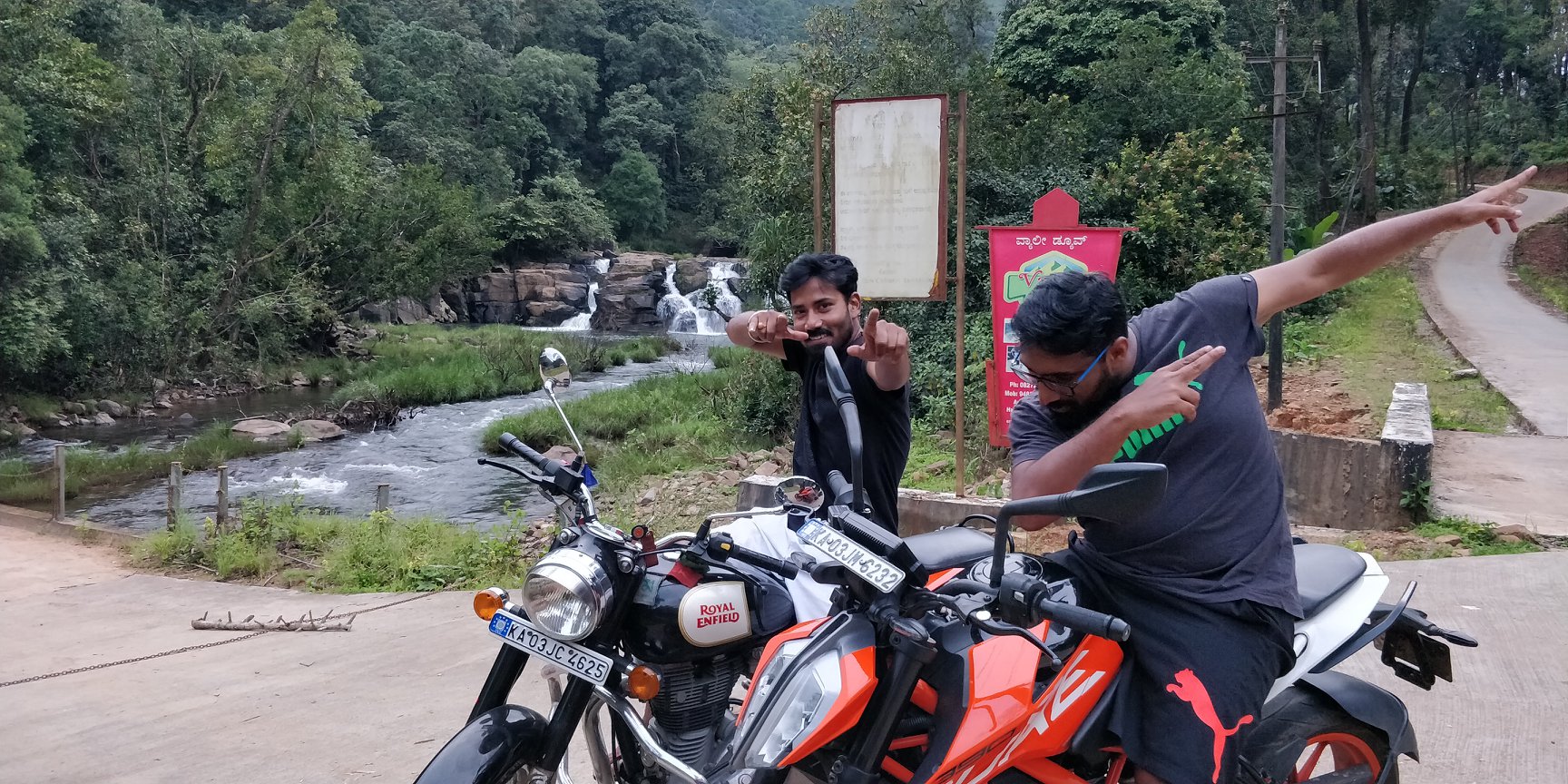 A good relaxing time spent at the waterfalls and on our way back, it was pitch dark and no moon night.  At some point, we all switched off our bike’s headlights and all screamed on top of our voices.  Darshan’s bike was low on fuel and had battery issues, but could make it back till the homestay. 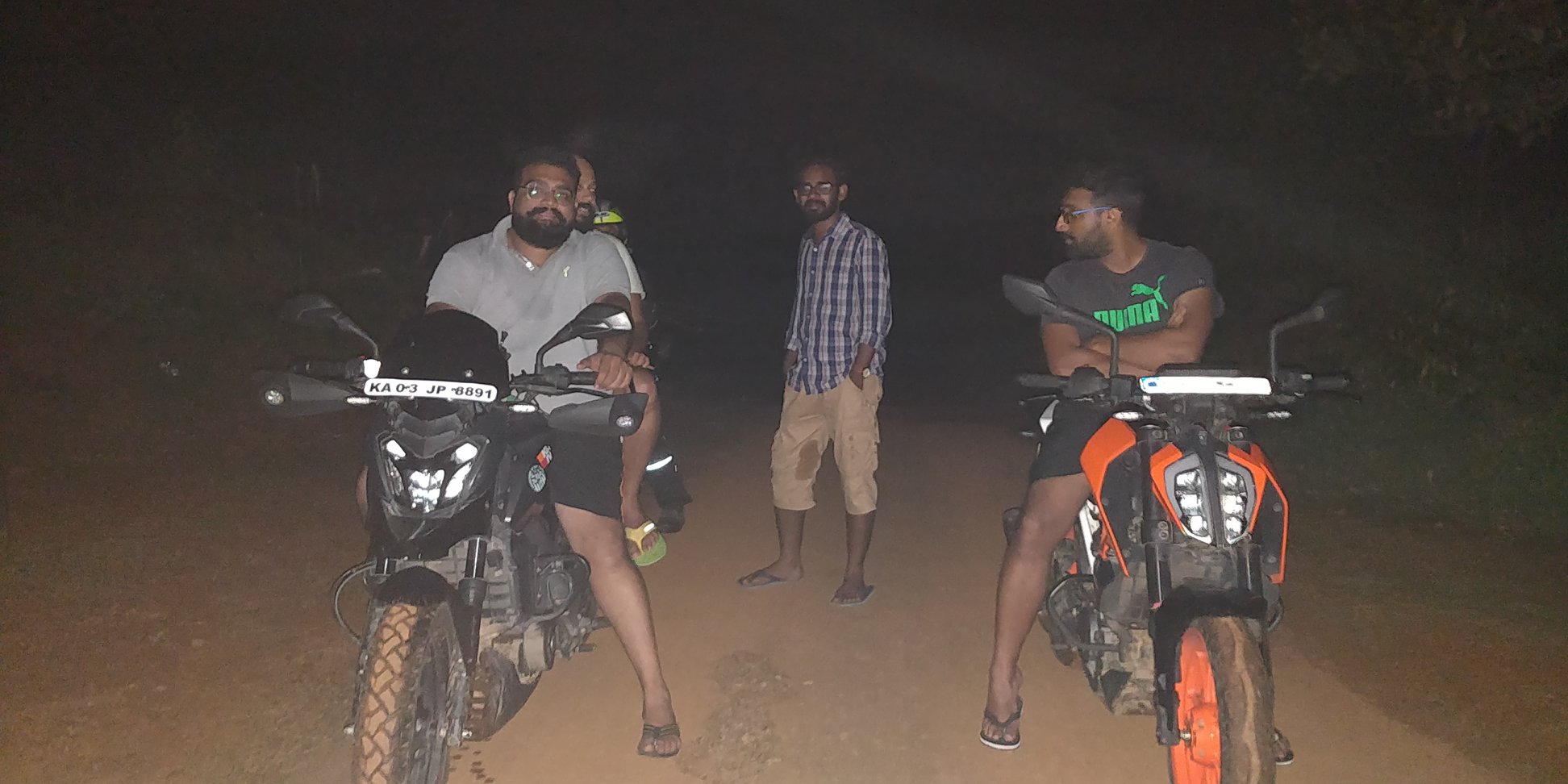 Upon reaching back to the homestay, our master chef Rahul got into cooking spree and assisted by Tarun, Manjeet, Darshan and Sudheer. 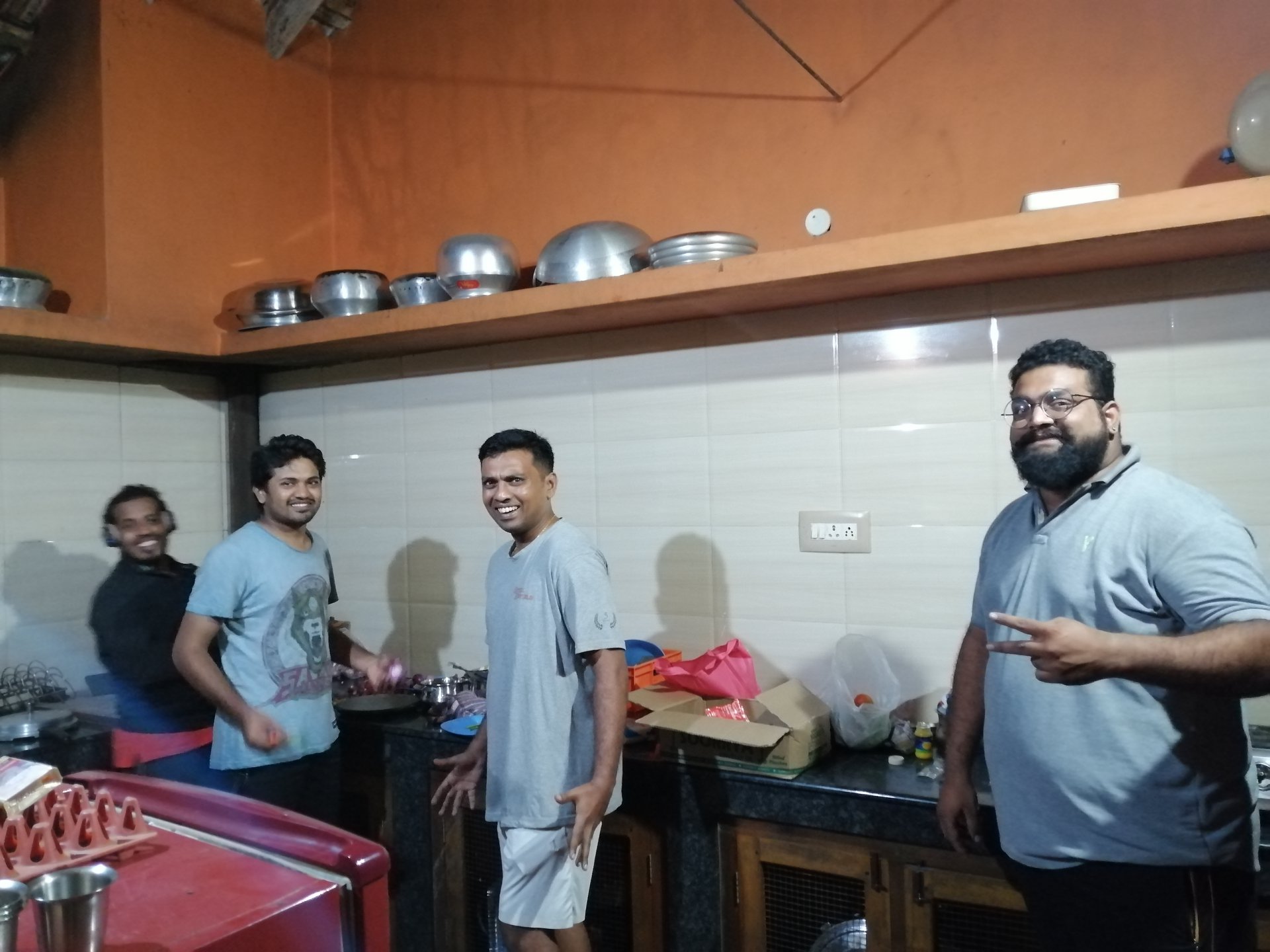 He cooked some yummy food and the barbeque done by Tarun and Darshan on the bonfire was like icing on the cake.  A good ice-breaking session started by Thiru and followed by everyone.  It was our first overnighter with our office Bikers and an ice-breaker was needed to get along with all. 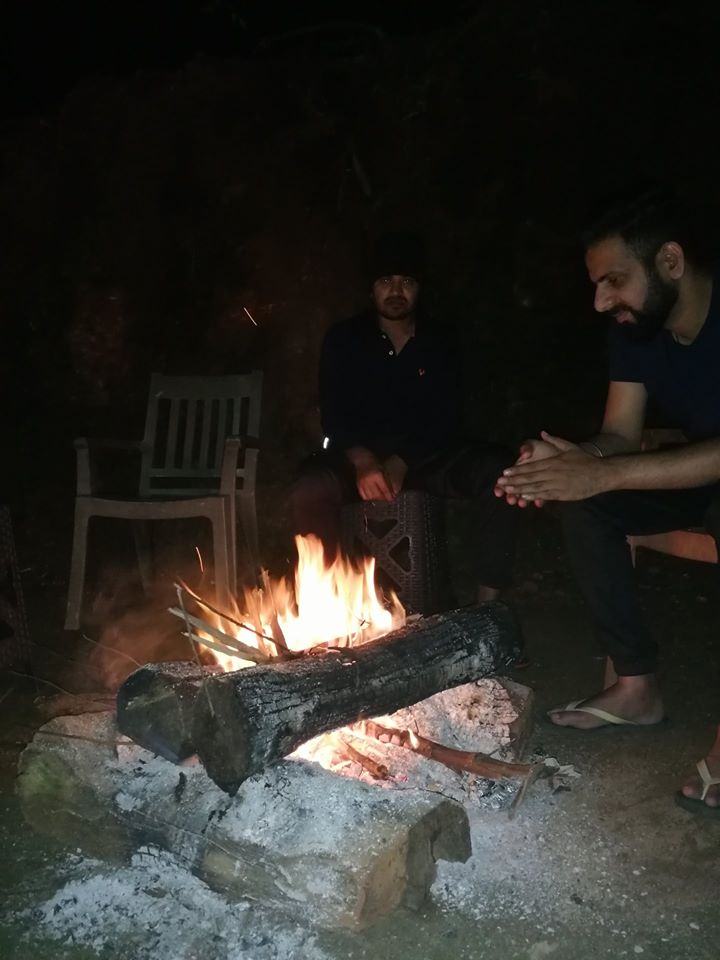 A anecdote by Thiru:

“Divided by designation but united by OMR

It started out as a regular night, somehow it turned out to be a spectacular night with long & deep conversation on movies, sketching etc. coupled with delicious food

The party went till late in the night and all crashed into bed.

A few of us woke up early and walked to the nearby shop for some hot tea.  Darshan and Raviraj walked further ahead to explore the forests and coffee estates and crashed into bed again.

Kishore received some emergency calls from home and planned to ride back solo.  My riding gears were wet because I wore them on the wet clothes after getting out of the waterfalls the previous evening, so I kept them to dry on a chair as the weather was bright and sunny.

Darshan purchased fuel from the nearby shop by paying some extra bucks and we all started on the crazy off-roading.

The initial stretch was an easy muddy trail and some broken patches uphill.  We stopped at a shop before the off-road turned crazy to rocky terrain. Darshan’s bike had battery issues and had to be towed to get started and returned to homestay along with Sudheer.

Rahul, Kowshika, Tarun, Thiru, Manjeet, Raviraj and myself went ahead on the off-roader.  At a point, we stopped for some photography and saw the terrain ahead.  It was an adventurous steep that looked horrifying from the place we stopped. 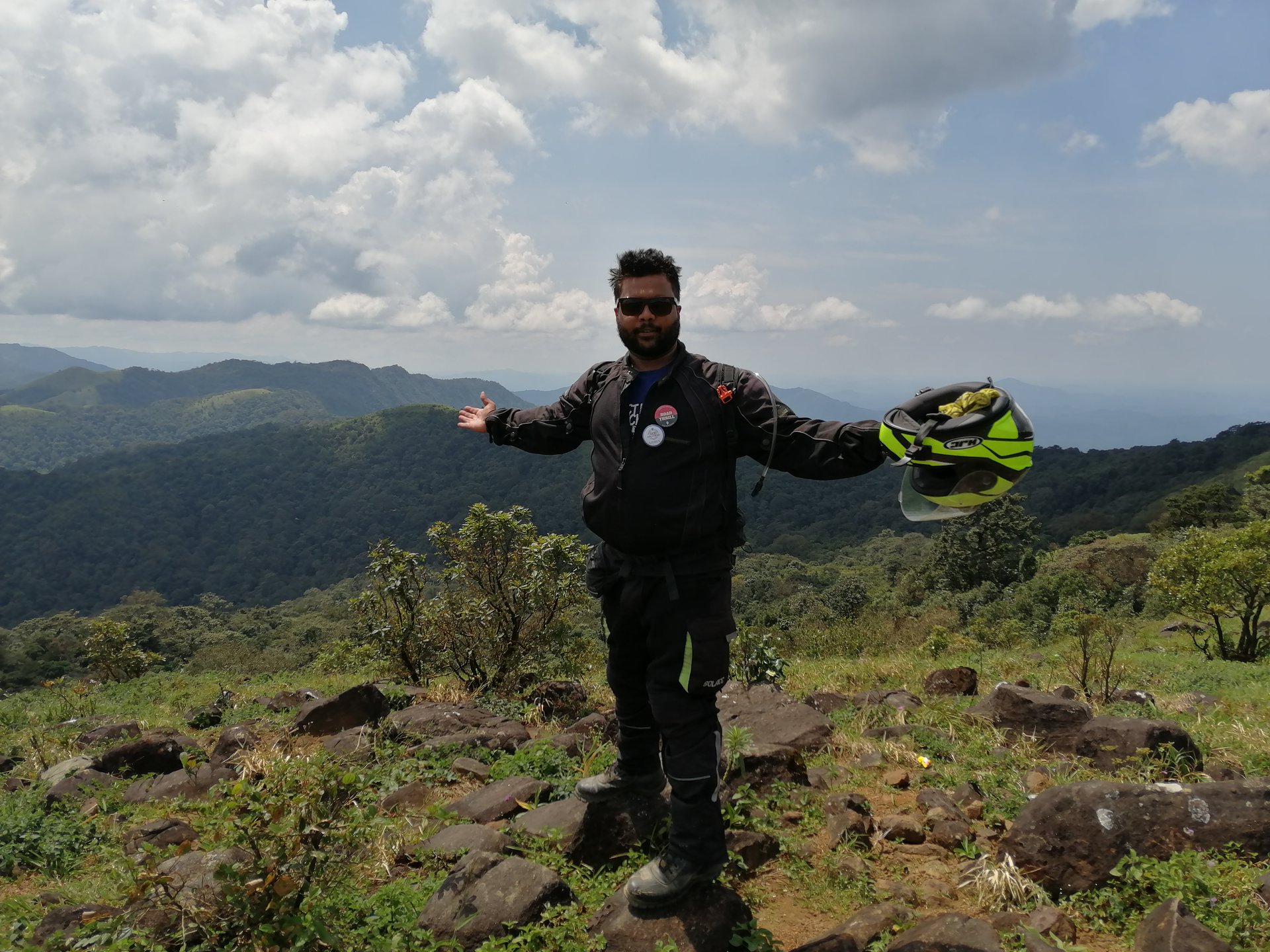 Rahul and I had that urge to ride till the top, no matter what.  Kowshika hopped as pillion on my bike and the three of us continued on the rocky terrain.

The steeps were crazy, one of the steep was roughly 60° inclined.  One 4×4 jeep kept honking and irritated me to my nerves.  The jeep drivers are always in a hurry to drive to the top or reach the base and catch hold of new customers.

The view from the top was bliss.  Mandalapatti’s viewpoint is truly the Heavenly Abode in Karnataka.  The moderate cloudy weather and the cool breeze and the valley surrounded by thick green forests and we could sight the dirt trail we took from a balcony. 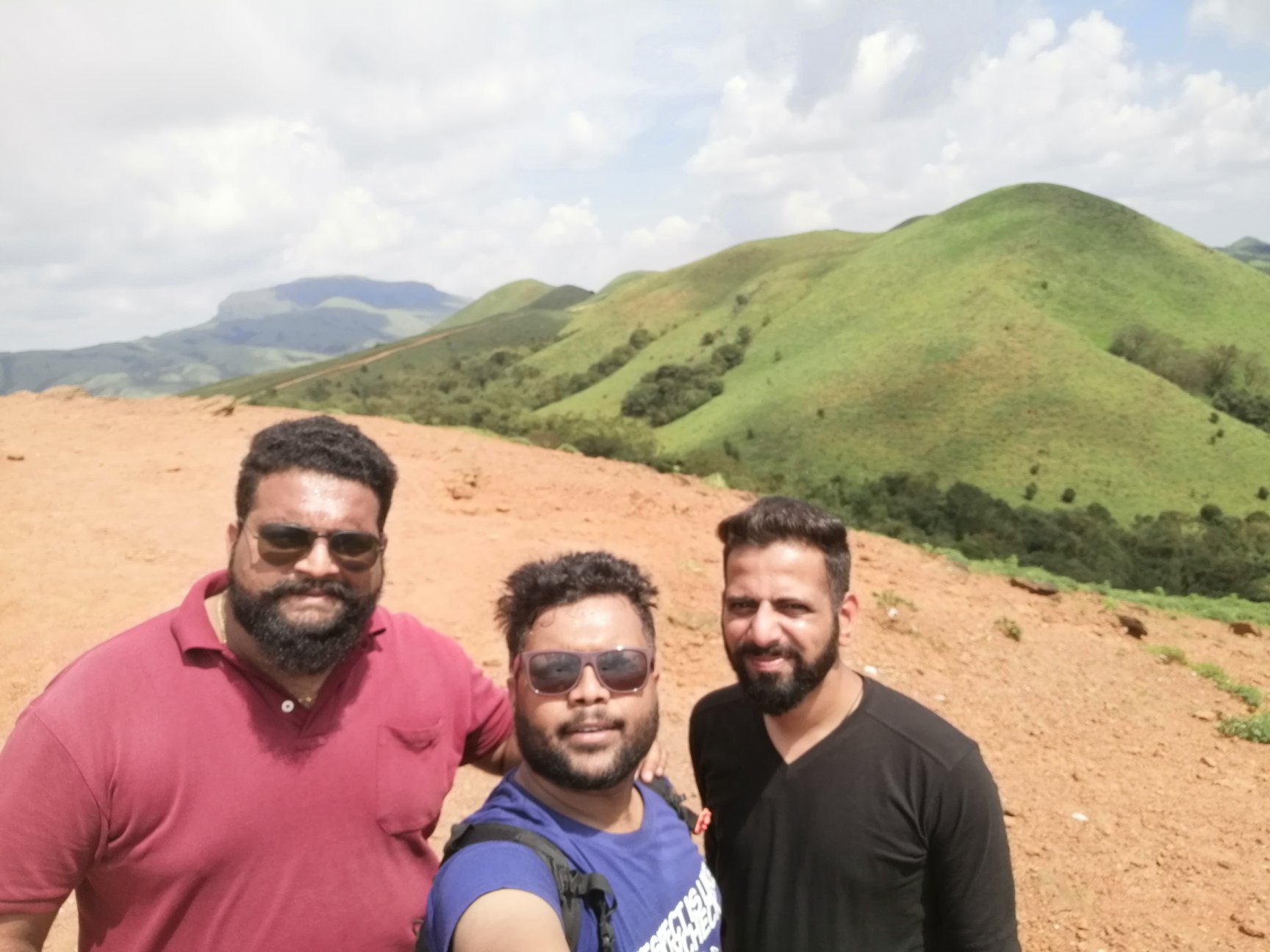 We headed back to the homestay.  I was shit scared on the crazy steep riding downhill as my bike’s tire threads were bald, one small slide and I would have a bad crash.  Rahul’s bike had Ralco off-road tires on his Dominor, so he didn’t face any issues. 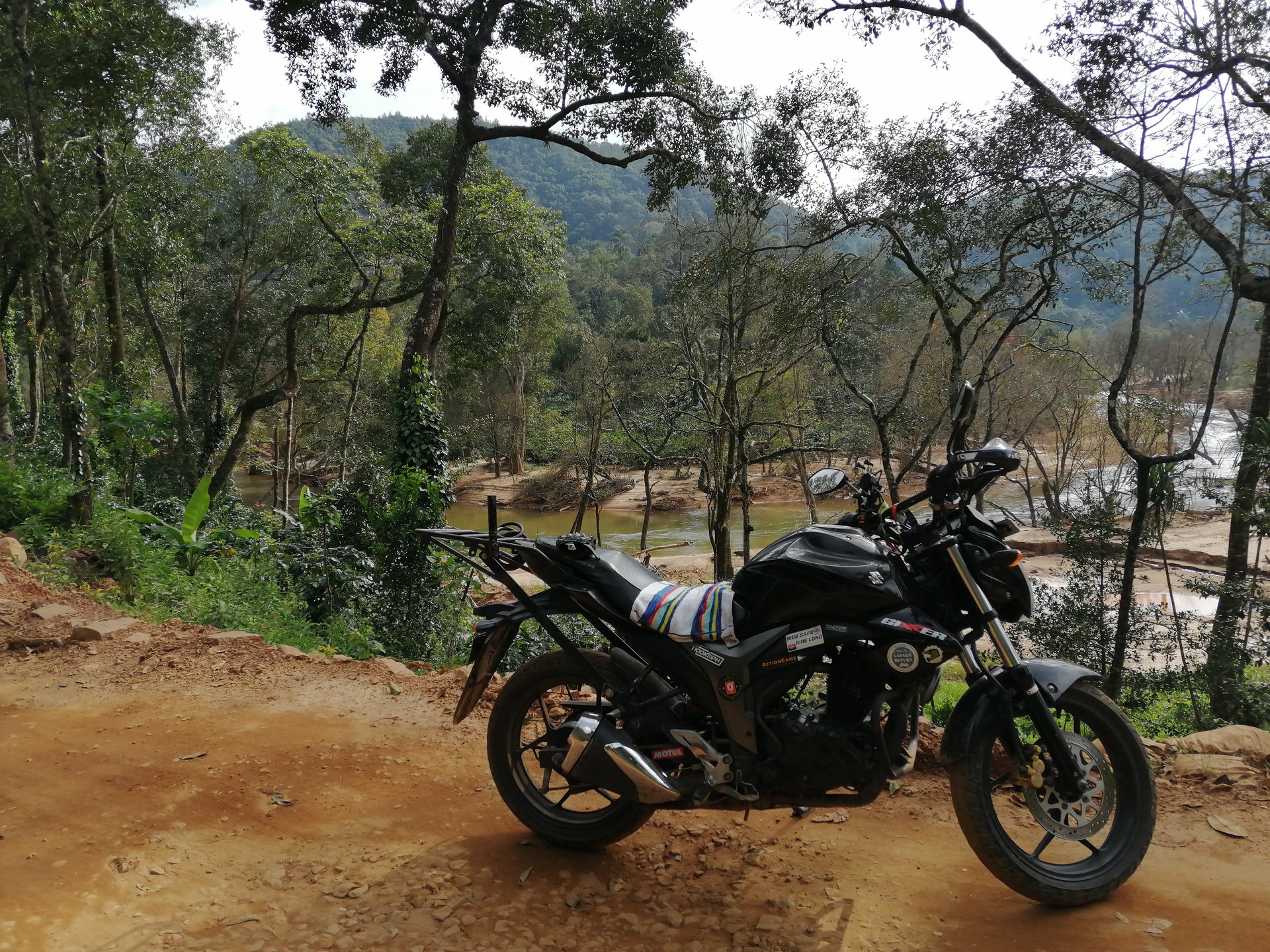 We reached back the homestay and to see all were snoring in deep slumber.   It’s good that the rest of the riders got some rest.

It was 3.30 pm and we decided to gear up by 4 pm and head towards Bangalore.  It was dusk during our return journey through the ghats.

We stopped for chai somewhere, and every pitstop we took, we had to tow Darshan’s bike.  It was Sunday and no mechanical support available and none of the battery shops was open, so after every pitstop, his bike had to be towed to start.

After Kushal Nagar, our pace dropped, pitstops increased and there were lots of bugs hitting our helmet visors in the dark.

At 9.30 pm we reached Kunigal and stopped for dinner at the Hotel Empire; the first thing all did, gulped the mixed fruit punch.

A relaxed dinner and upon exit from the Hotel Empire, Rahul was towing Darshan’s bike, meanwhile, I was covering them with hazard blinkers, suddenly a speeding Volvo bus overtook me and missed crashing Darshan by a whisker.  Luck was with us, it could have been fatal.

It was 1 am when we reached the Nelamangala toll and dispersed.

Thanks a lot, for an amazing overnighter and special thanks to Rahul and Sudheer for coordinating and executing this ride well.

Also visit: My Trails from the Malenadu Region