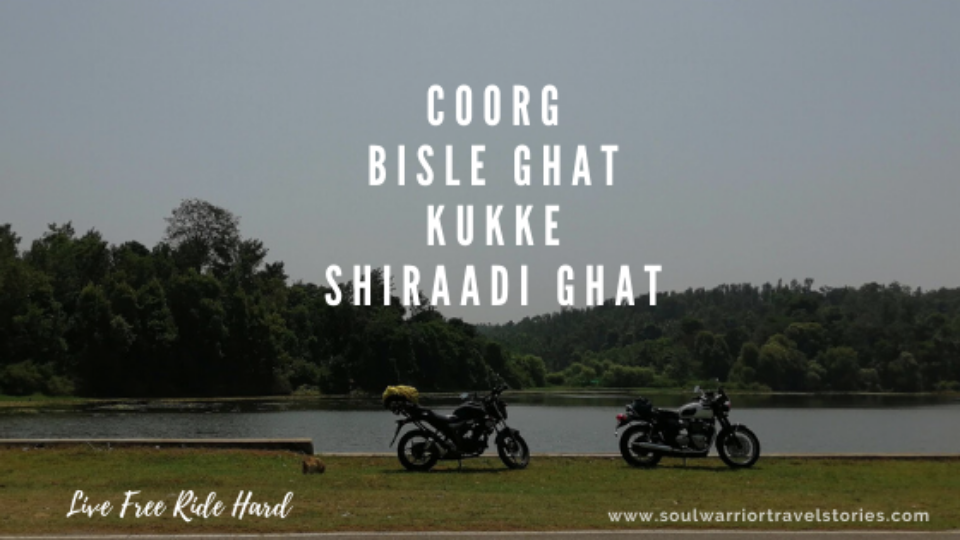 Back in May 2019, when I was having a chaotic personal time; marriage tortures at home, banks chasing me for credit card and EMI dues, office year-end pressures plus a stray dog had bitten me and I was taking Anti-Rabies vaccine!  All happening at the same time.  I was craving to hit the road on my Warrior, a break to escape all the chaos that was happening around me.  I wanted to pin the throttle to a place free from cellular networks.

Late Thursday evening; Sudheer asked me if we could ride to Coorg for an overnighter that coming weekend.  Sudheer spoke to one of his friend’s homestay and booked it for us.  I agreed and started packing.  I was excited to get back on touring mode after a long gap of 6 months apart from the short day rides.

Both of us were on time at Parle Toll Plaza early morning, paired our intercoms over a quick chai and started riding towards Kunigal on the Hassan Highway.  The most common road to Coorg is via Mysore, which we always skip and take the Hassan road. 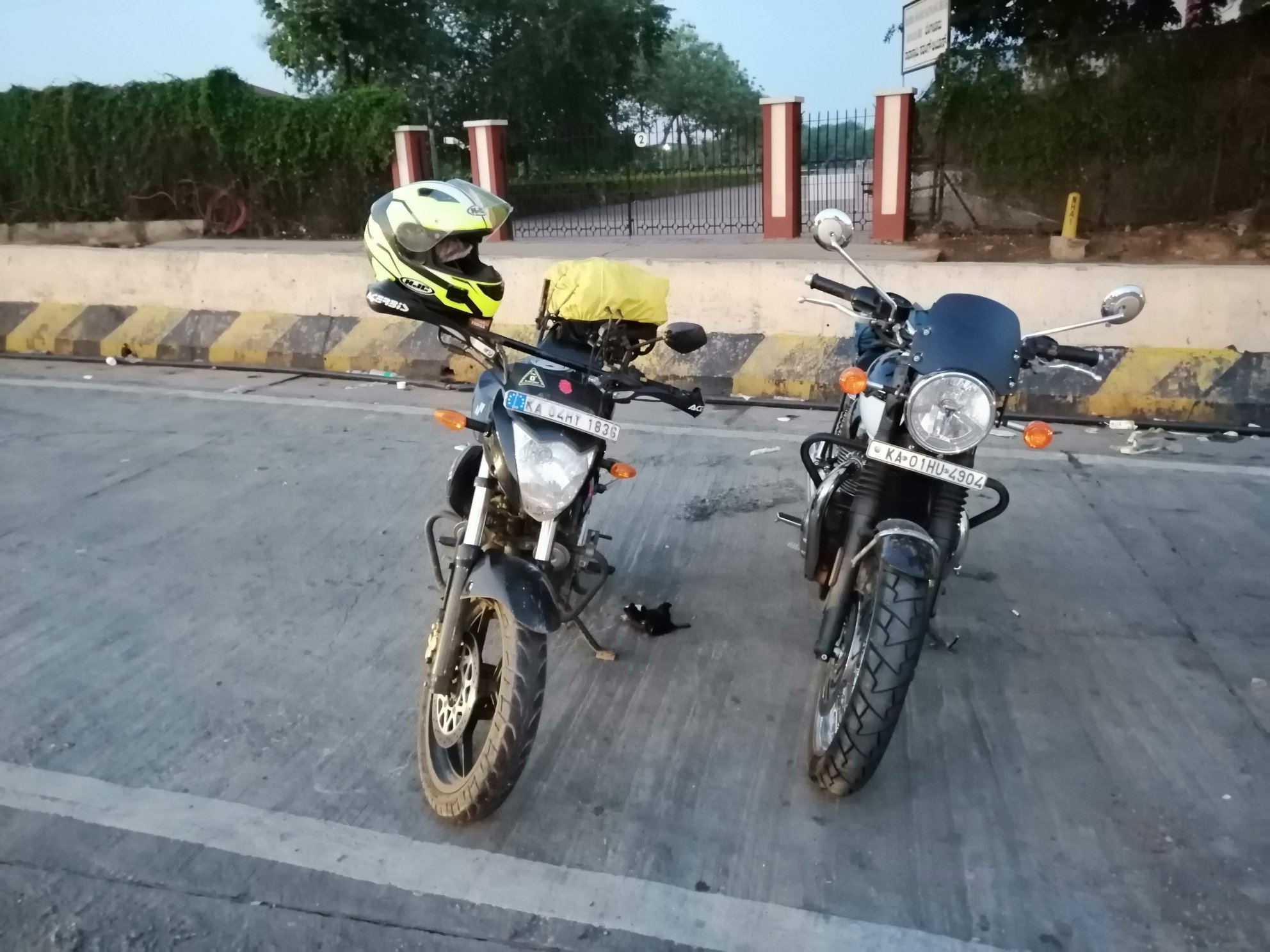 Sudheer wanted to open his bike’s throttle and zoomed off, my Gixxer wouldn’t catch-up with the Triumph; so I was at cruising speeds, enjoying the early morning weather and listening to music. 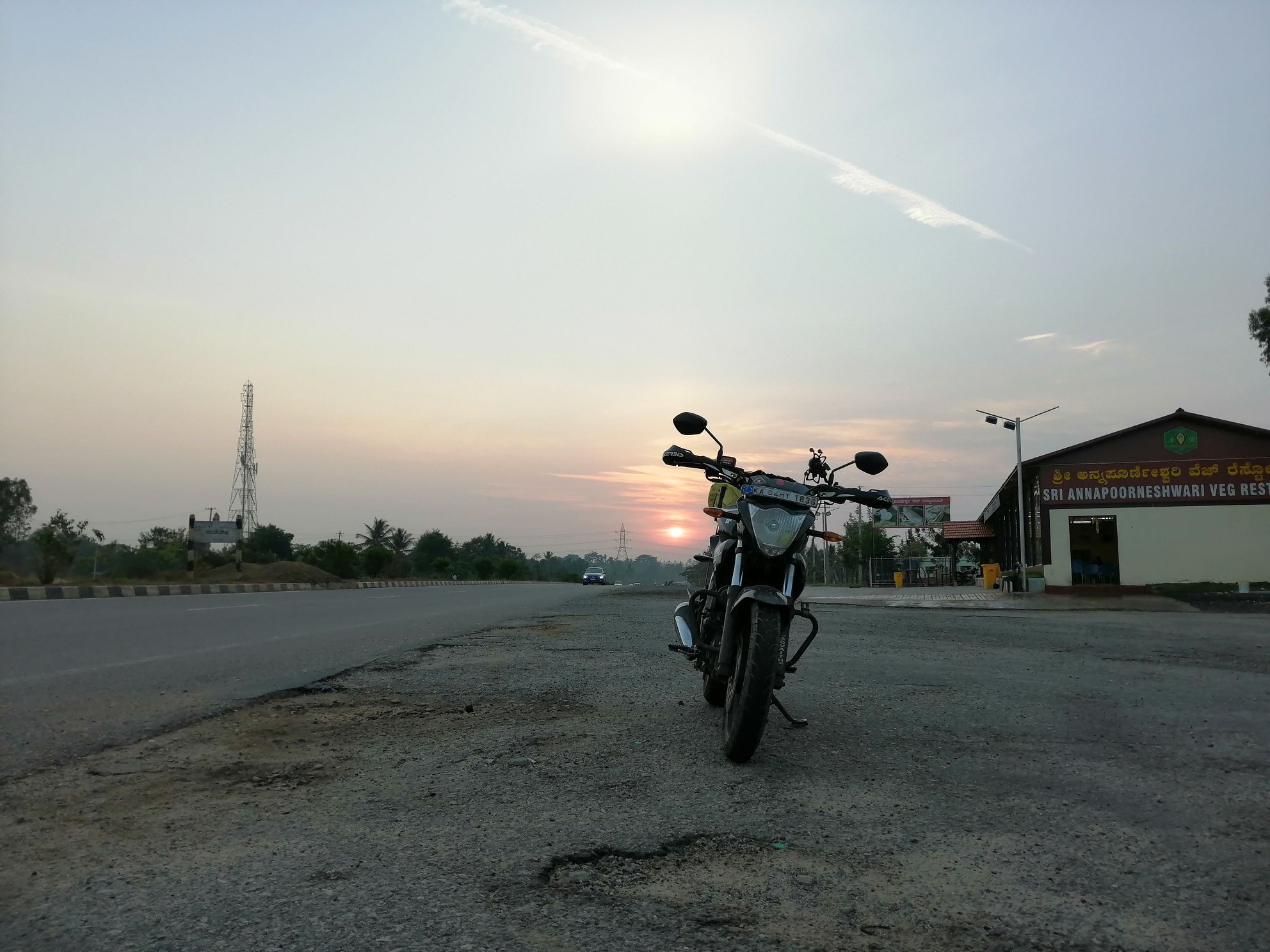 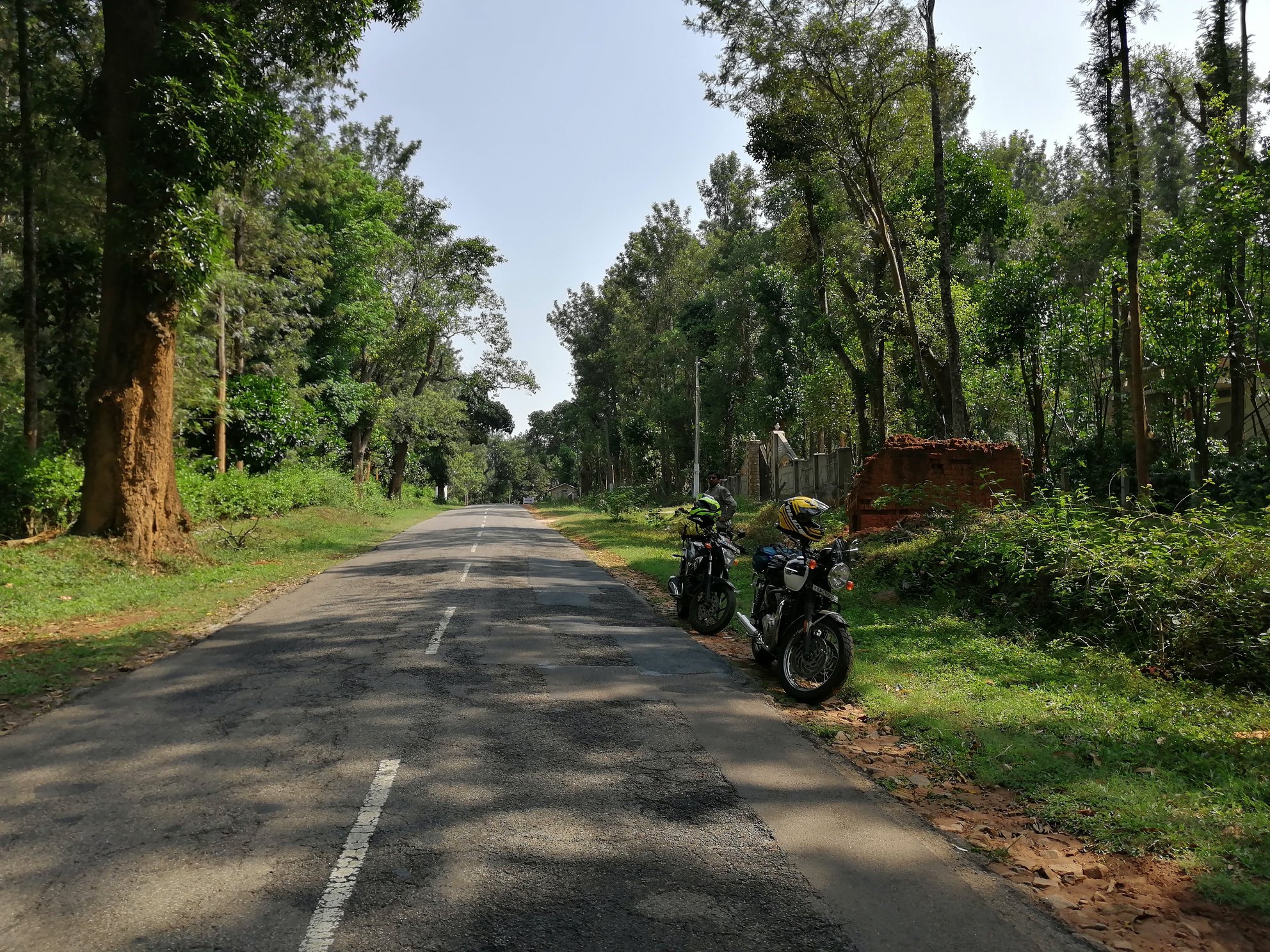 We stopped at Somwarpete to withdraw some cash and to buy some holy water; OMR and some Beers off-course 😊.  Sudheer had been to the homestay earlier and he knew the route and I tailed him throughout.

A detour after the Somwarpete bus stand and the roads were very narrow single laned curves.  Somewhere in the middle, I noticed a board that read 55 kilometers to Kukke Subrahmanya, and I asked Sudheer on the intercom, does this deviation go to Kukke via Bisle ghats, he said; “Yes, but shut up and follow me”.

We reached the homestay, to our surprise, the caretaker of the homestay mentioned; they weren’t aware of booking for that weekend.  Probably some miscommunication between the owner and the caretaker.

The caretaker had 2 dogs in their cowshed. I was playing with them without any fear of getting bitten again.  Sudheer told the caretaker; we will rest here for a while, visit Malalli falls later in the evening and return to Somwarpete for the night’s stay.

I didn’t break my head for the miscommunication between the owner and the caretaker nor did Sudheer.  We just chilled out with some beers and chips, sitting in the homestay’s verandah and rested for a while in one of the rooms.

After a good sleep for an hour or two, we woke up and rode to Malalli falls which is less than 5 km from the homestay.  It was peak summer and the falls had dried up, we still took the steps to the base.

We climbed back to the parking area and had some bread omelet at one of the stall there.  We were super hungry and ate whatever food the stall owner served. 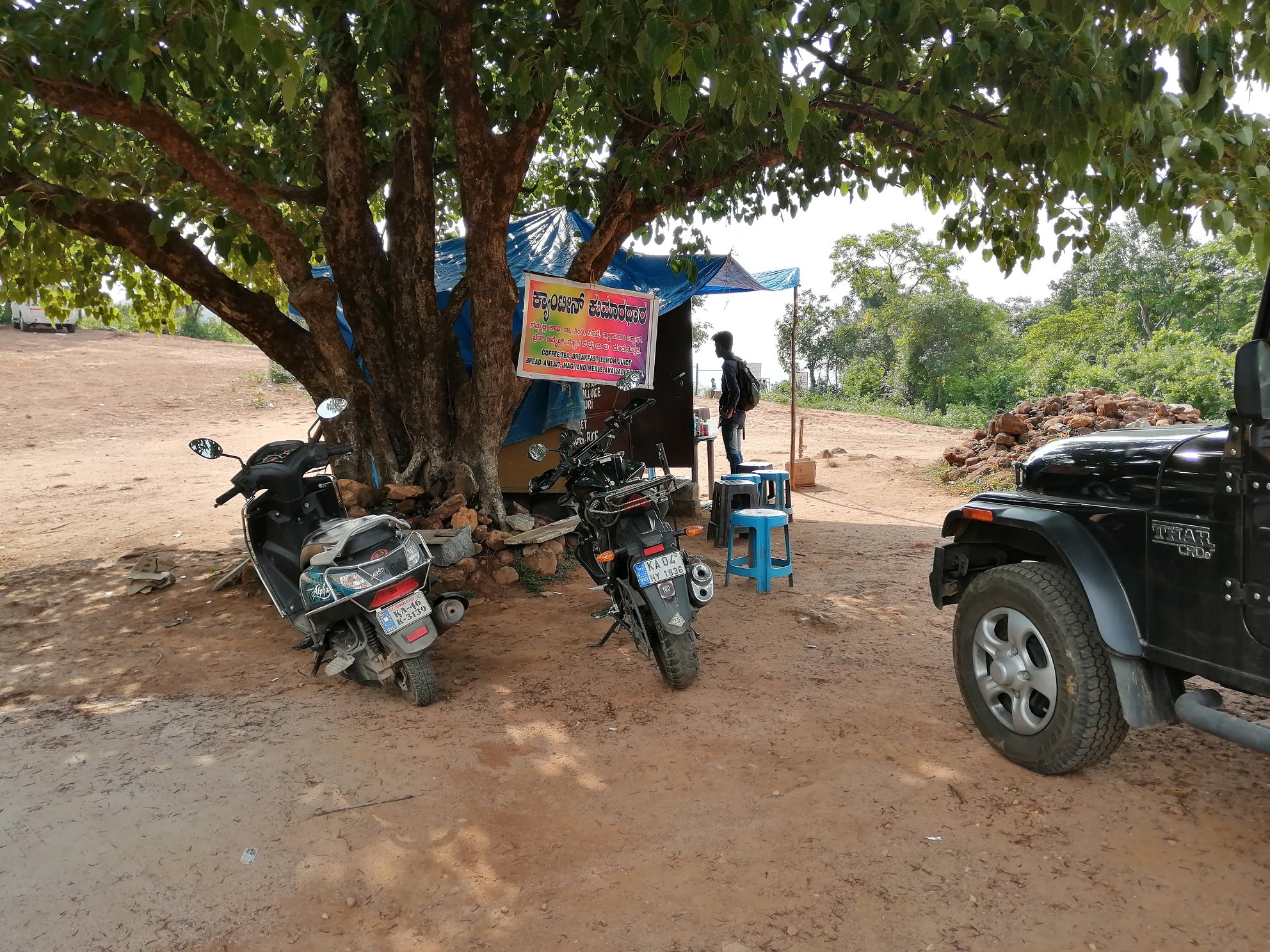 Sudheer mentioned a private mini waterfall nearby, we decided to check it out and surprisingly there was a tiny stream flowing through the stones.  We had a gala time playing in the tiny stream fall.

I go crazy when I see the water.   I stood beneath the waterfall, it felt like a jacuzzi, natural body massage.  It was a much-needed peaceful timeout amidst greenery as the tiny stream was surrounded by giant trees.  New folks wouldn’t be able to find this beauty easily! 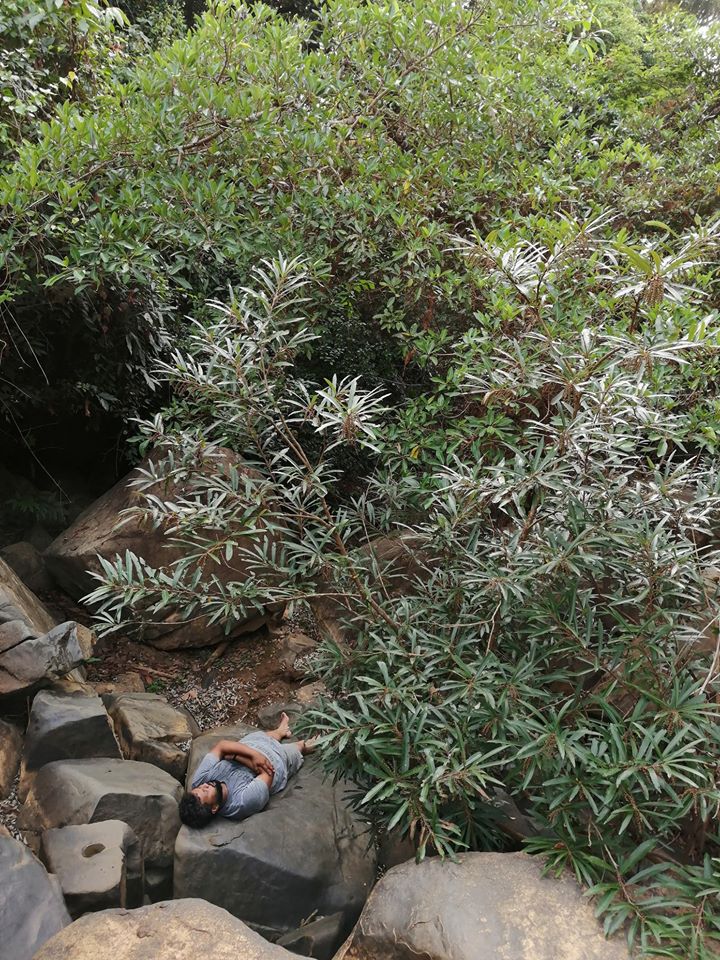 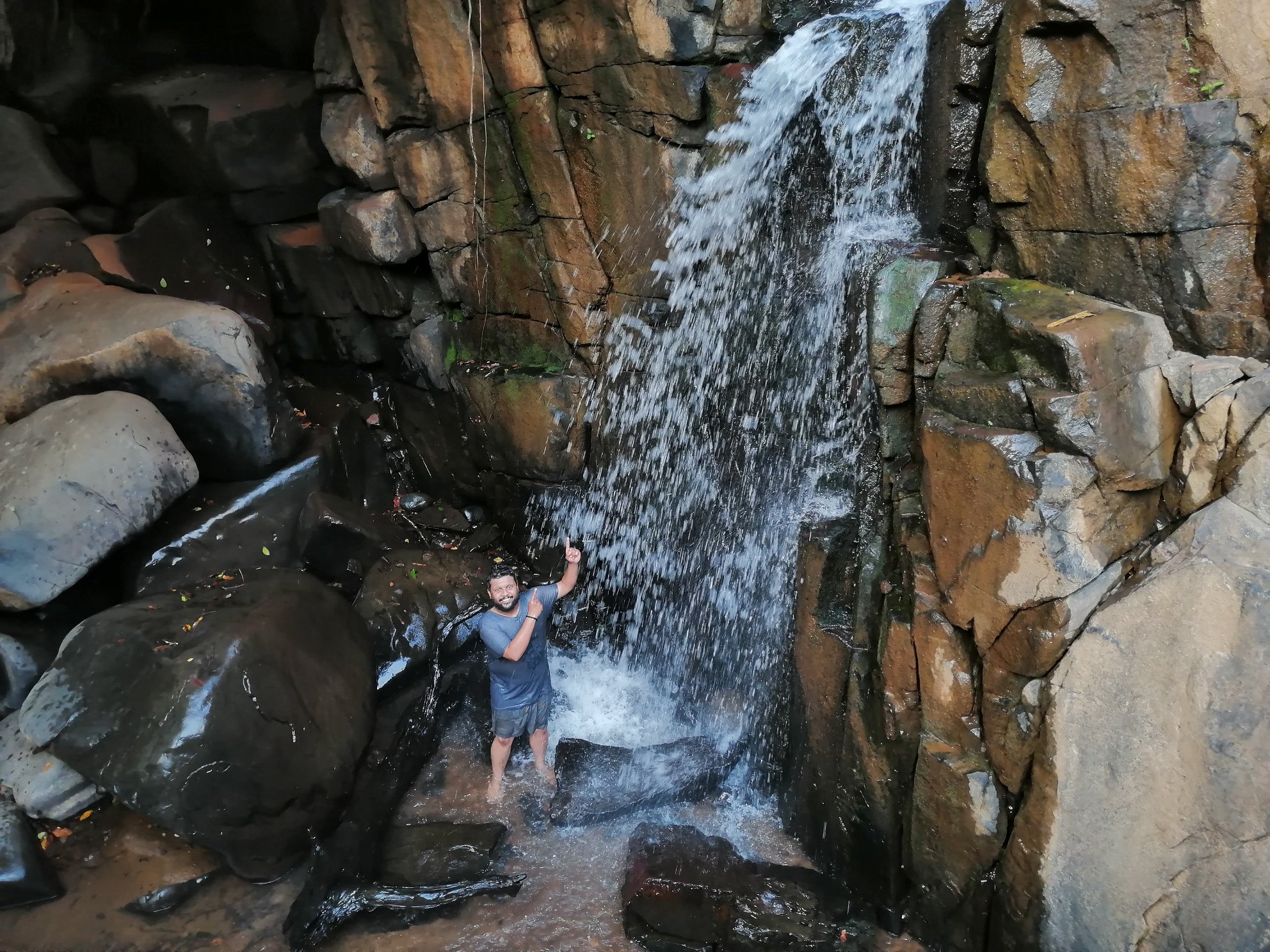 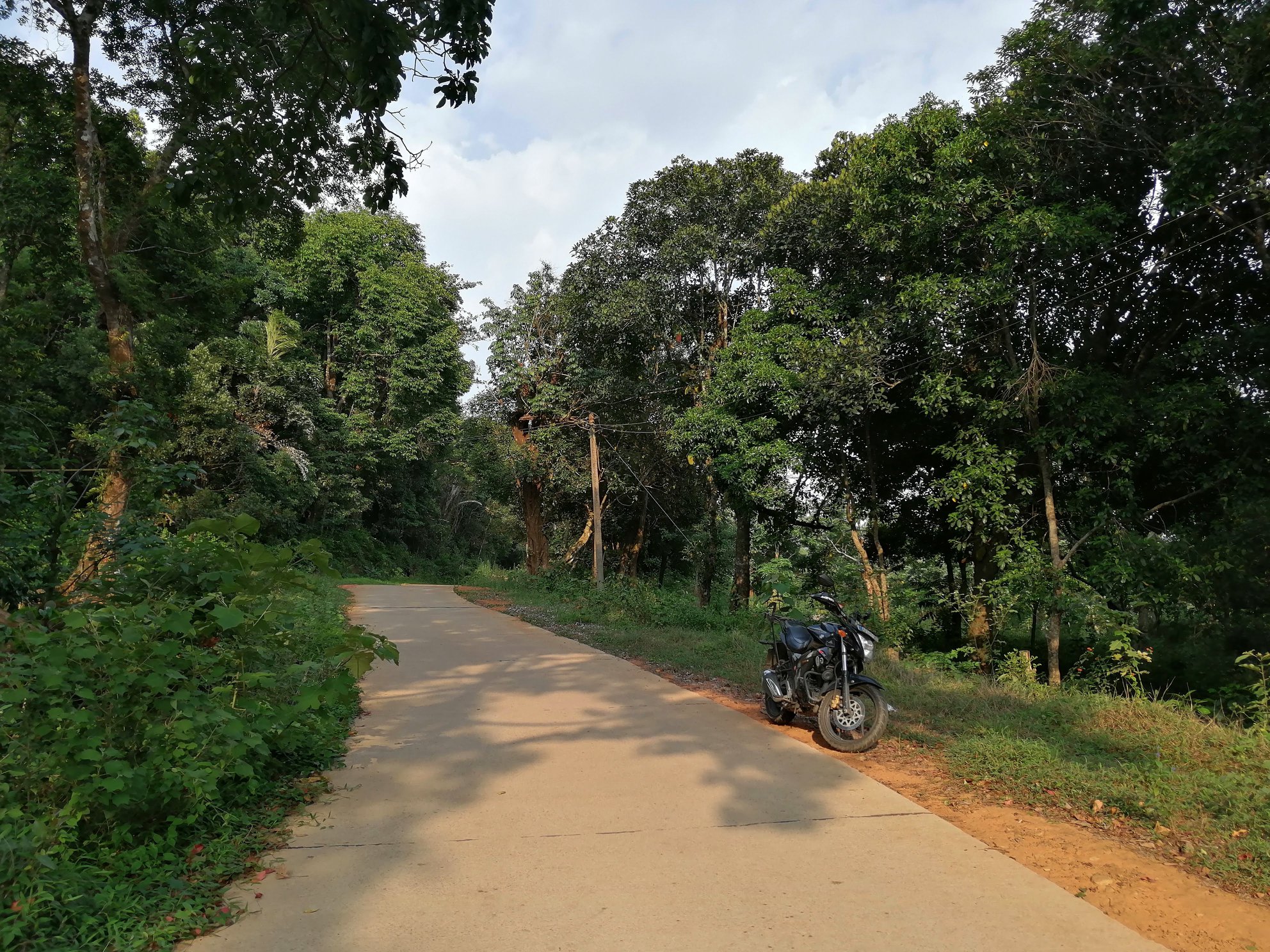 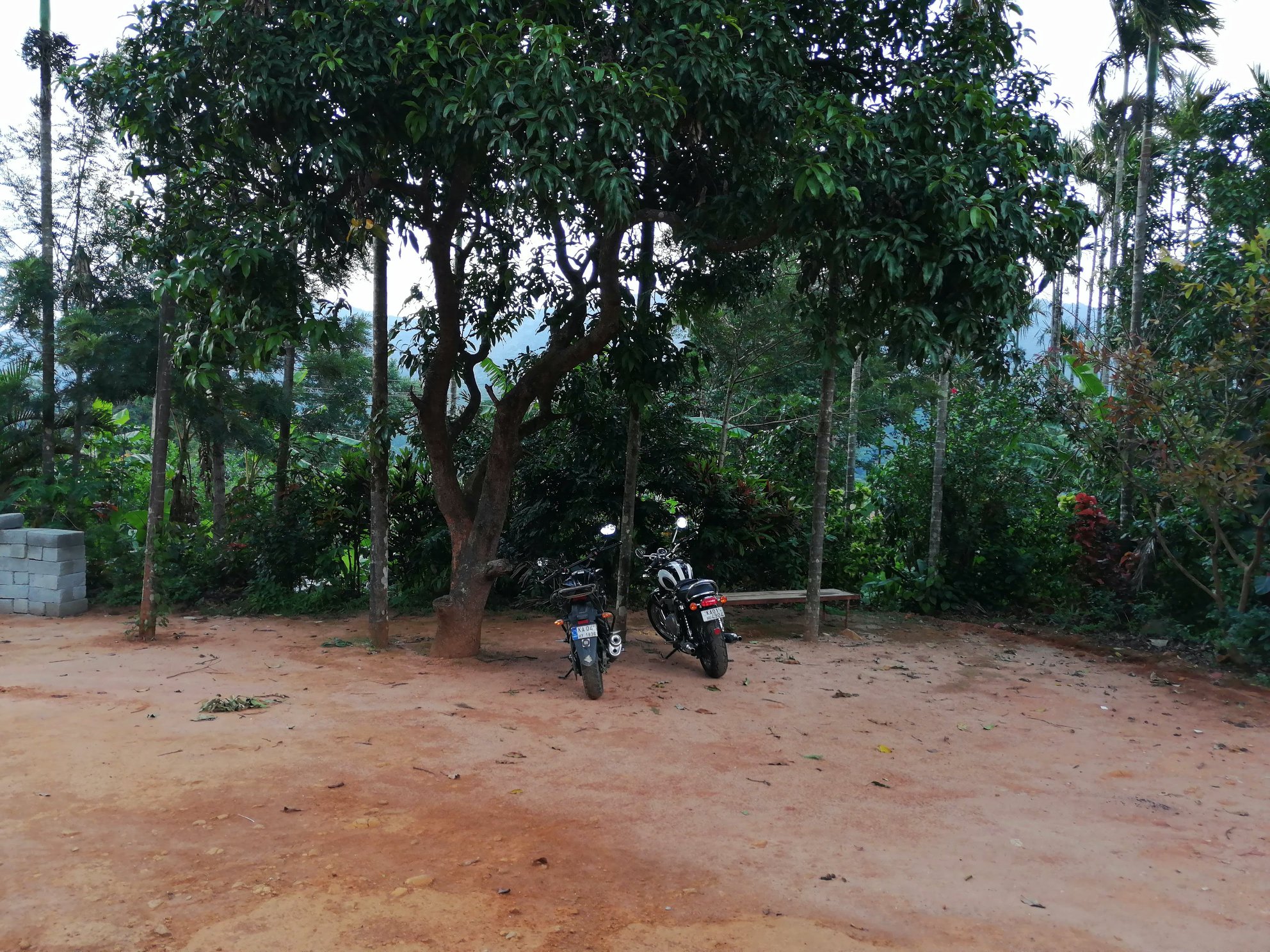 We reached back the homestay, geared up and came back to Somwarpete and checked into Oyo Rooms.

We walked inside the town in search of a hotel for dinner and it started raining heavily.  While running on the road, my slippers tore and I ran barefoot until we found a footwear shop nearby, bought a pair and continued looking out for a hotel for dinner.

We found a small hotel open behind the bus stand and got in.  We had some food and walked to our hotel.  We were exhausted, drenched and the holy Monk hit us bad.  We don’t remember what shit we spoke on our way back to the hotel room.  We just crashed into bed.

We woke up at around 9 am.  A quick shower and we walked towards the bus-stand to have our breakfast.  We found a small hotel that served local Coorg style breakfast.

I really wanted to visit Kukke temple and also ride the Bisle Ghats.  Sudheer wasn’t keen on another adventure, so he said he will return to Kunigal and be at his inlaws place if your interested go for it.  So I said, I will go visit Kukke and meet you at Hotel Empire, Kunigal.

Sudheer mentioned about a place Honnamana Kere, which was close by to Somwarpete.  We visited this small lake and took a few pics. 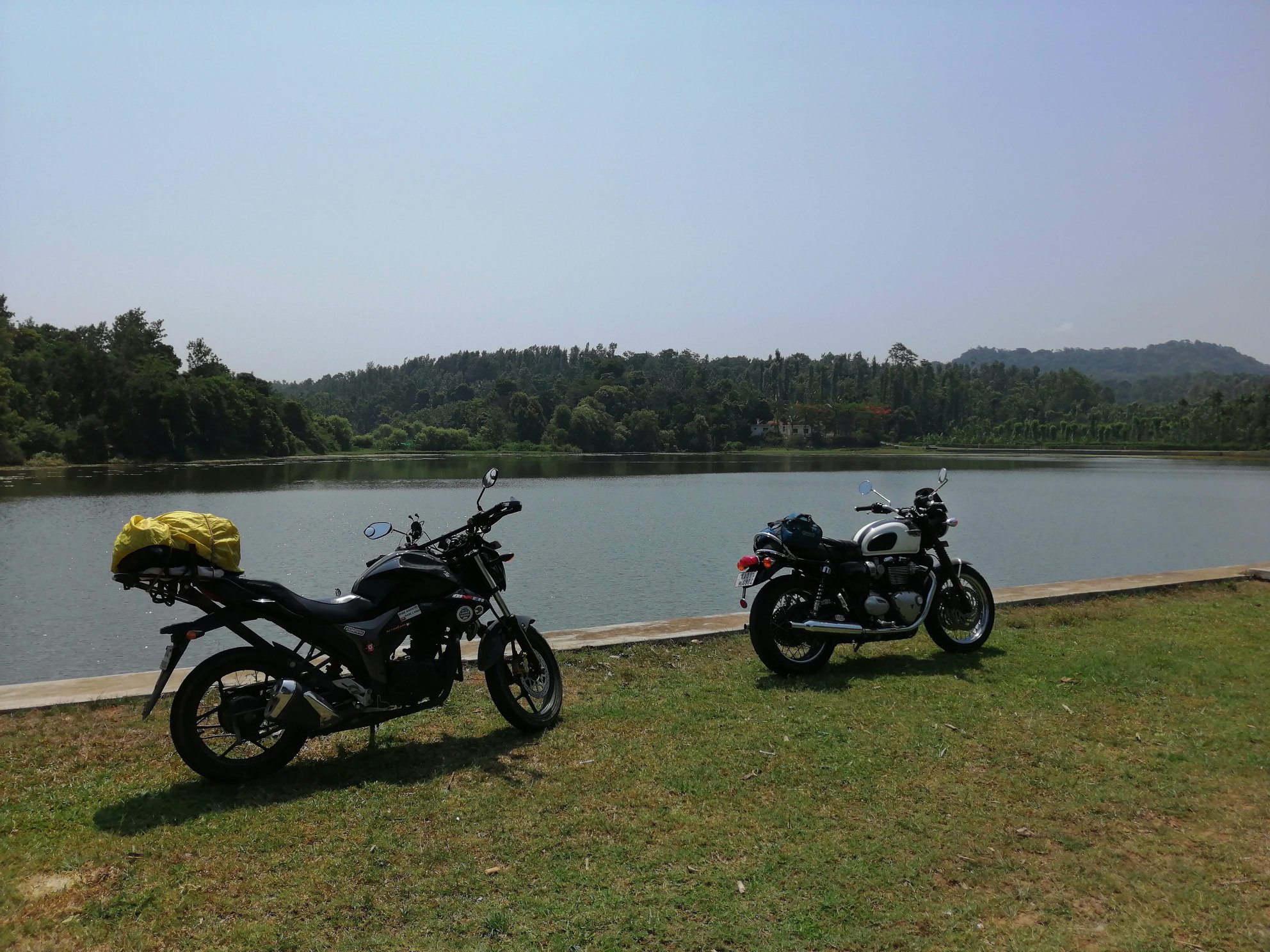 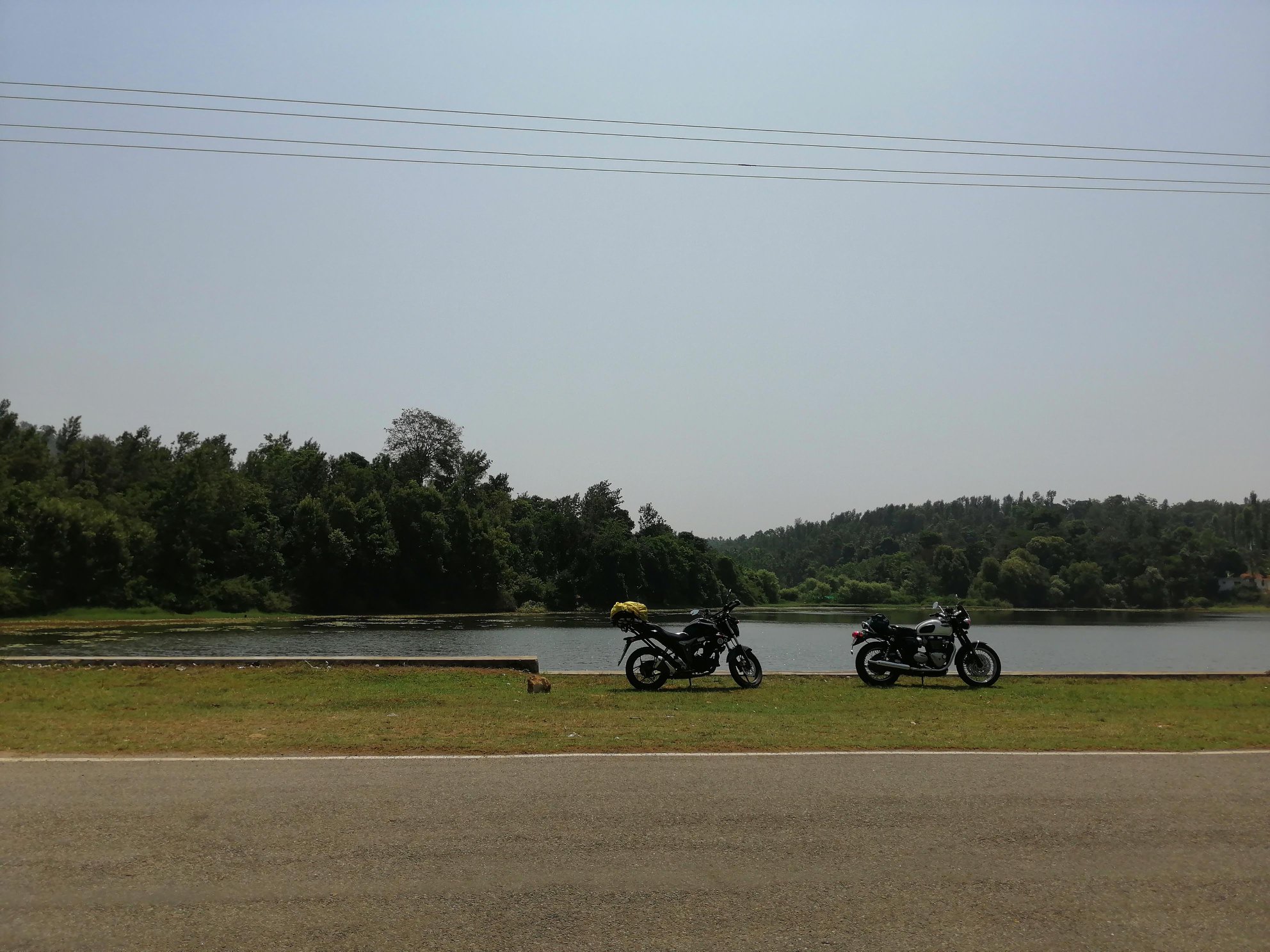 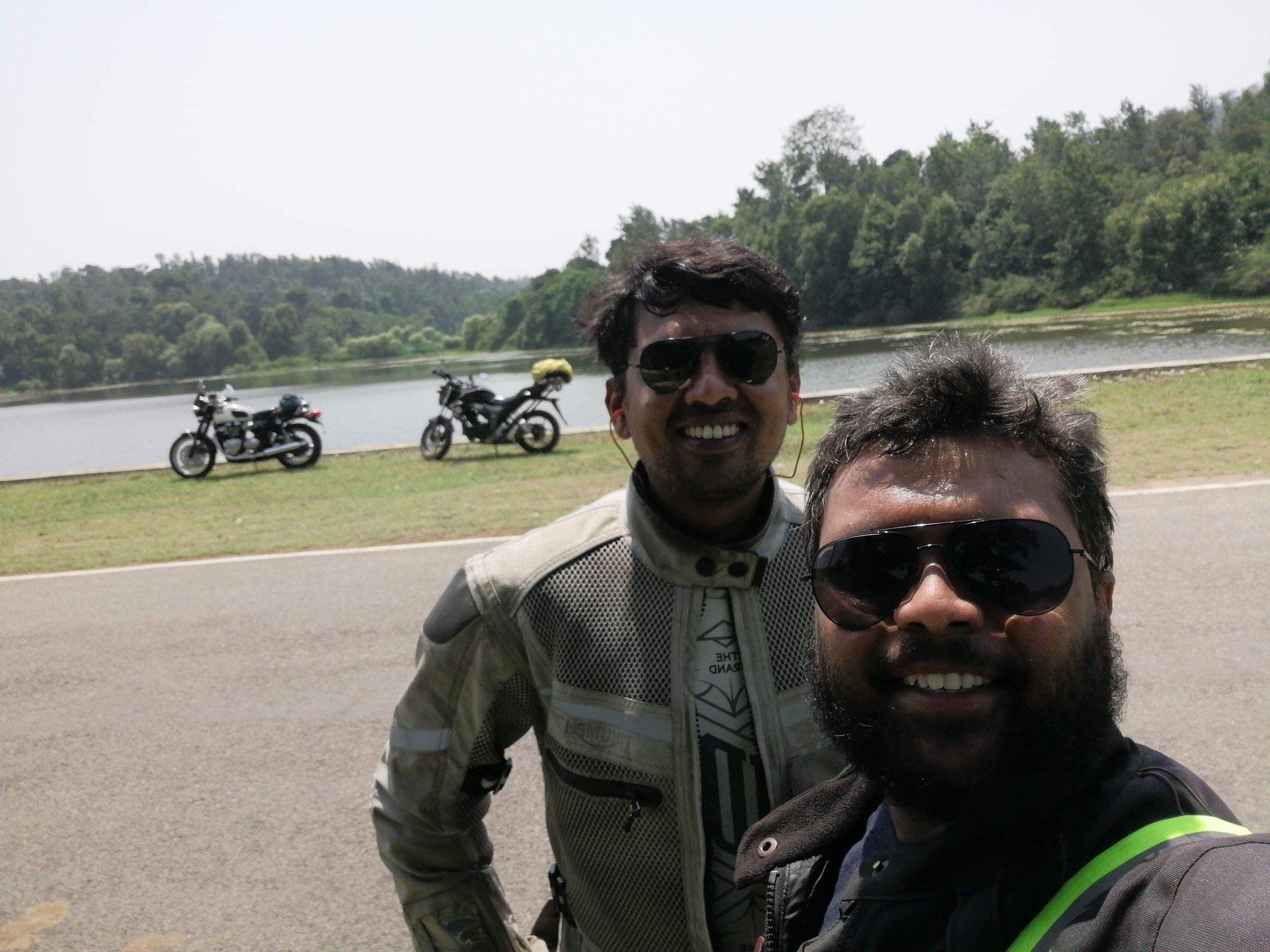 Sudheer took the route to Kunigal, and I headed towards Kukke.  The initial stretch of the roads was ok and then it turned total off-roading.  I was following the Google maps, I knew it would take me somewhere saying the shortest distance which it did. It deviated me somewhere on an under-construction road until it reached a dead end.  There were cement pipes and stones laid to close the road and followed by a deep dugout.

I guess Google thought I was a Super Cross rider who would do a backflip across the ditch and land flawlessly; sorry Google!

I came back to the junction and was amused that the Google map was still showing towards the dead-end, there was another road that went straight on and I continued that way and reached the check-post of Bisle Ghat. 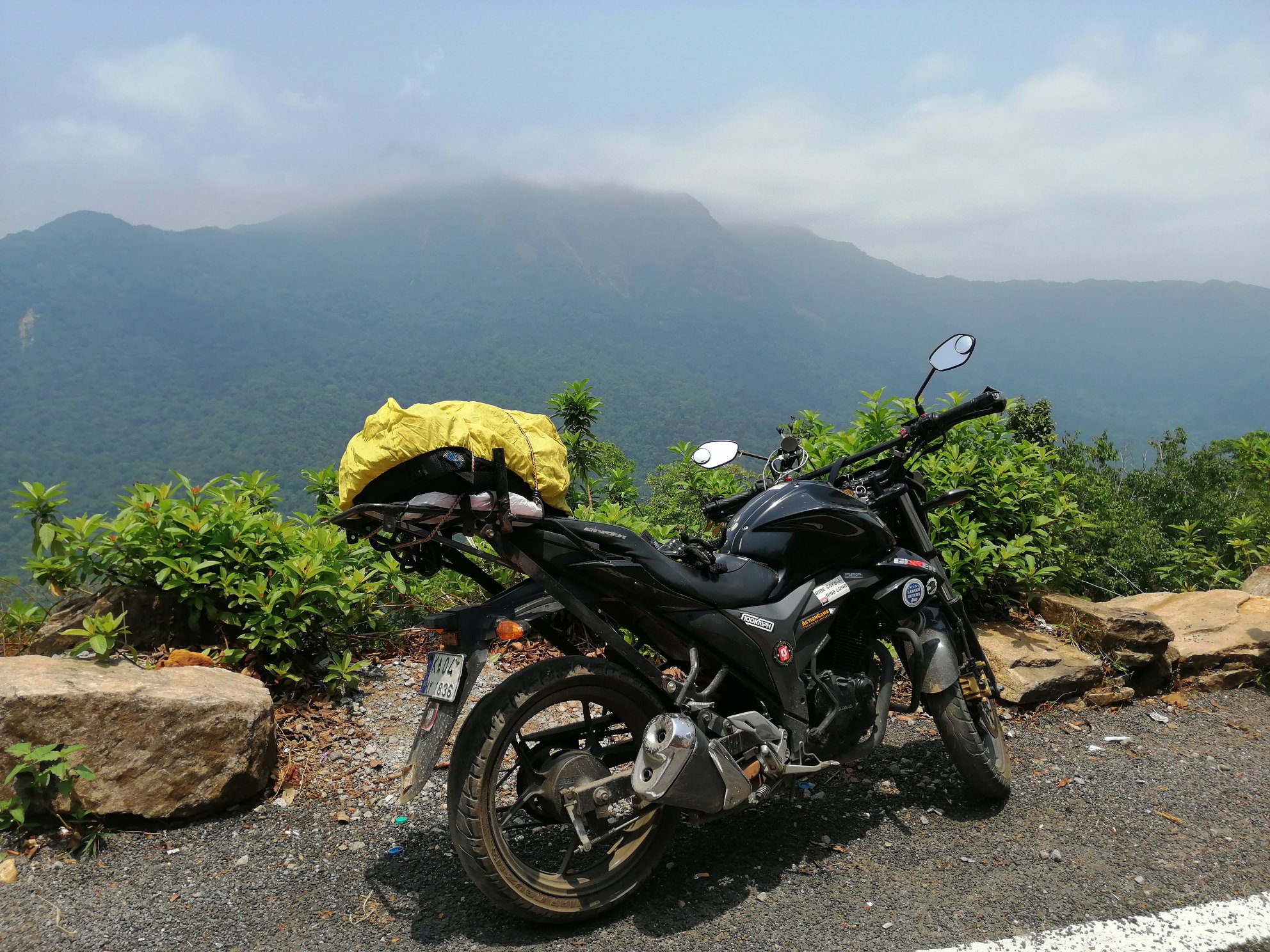 The ghats were super crazy off-roads and very narrow with hairpin curves passing through dense forest.   The weather was cool inside the forest area.  At a blind curve, there was a reckless car driver who hadn’t responded to the horn, appeared in front and didn’t leave any space for me to pass-through, I had to get off the road’s edge sliding over the mud and gravel and back on the patchy roads.  That was a near miss and a fatal accident was avoided! 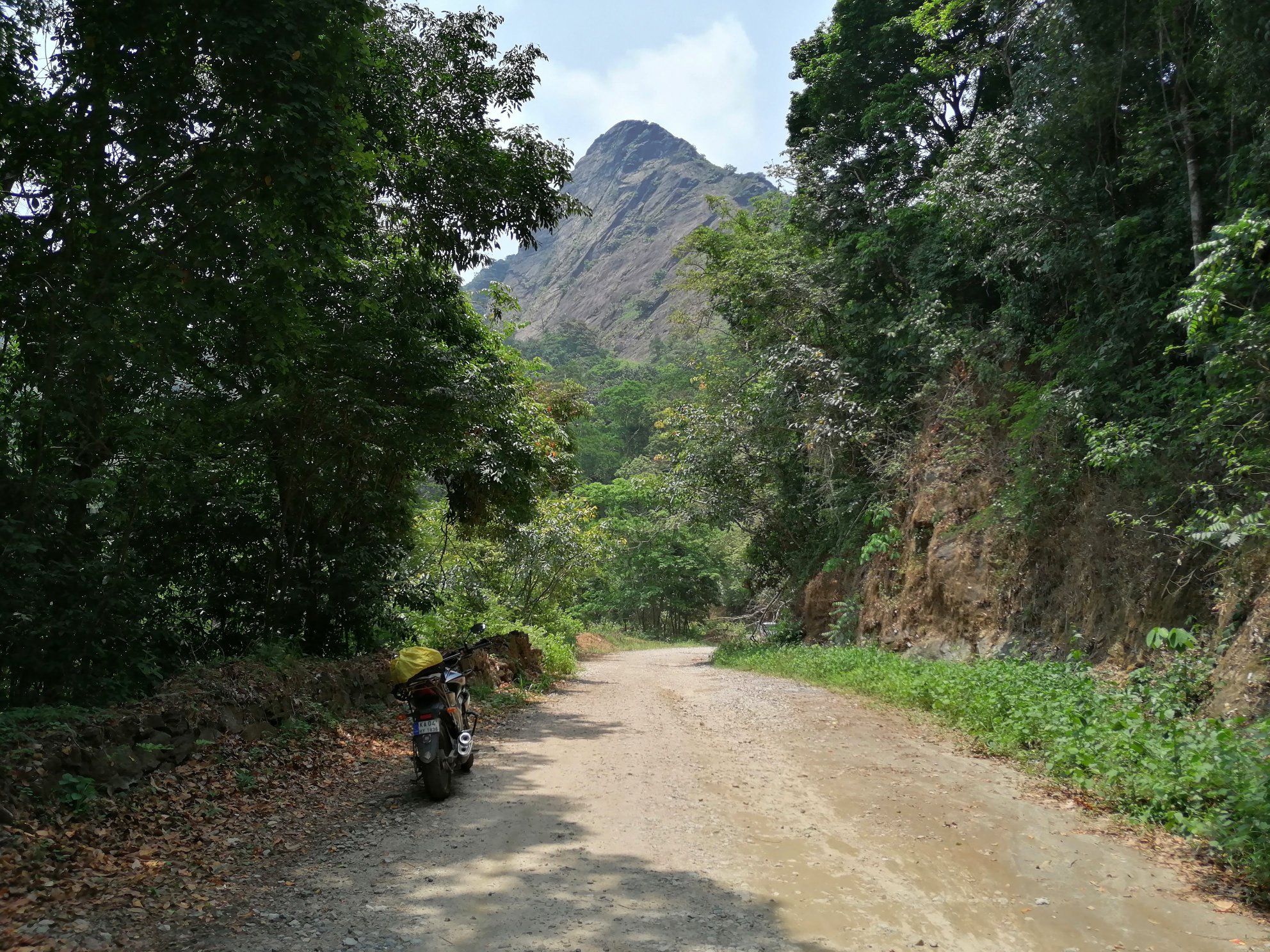 The ghat ended and after a few kilometers, I reached the State Highway and stopped at a roadside shop to have some sugarcane juice.  I could feel the scorching hot weather of the DK district, gulped multiple glasses of sugarcane juice to quench my thirst.  I was happy and excited to tame Bisle ghat, as it was the only pending item on my To-Do list of the dangerous ghats in Karnataka;  having done Charmadi, Shiraadi, and Agumbe earlier. 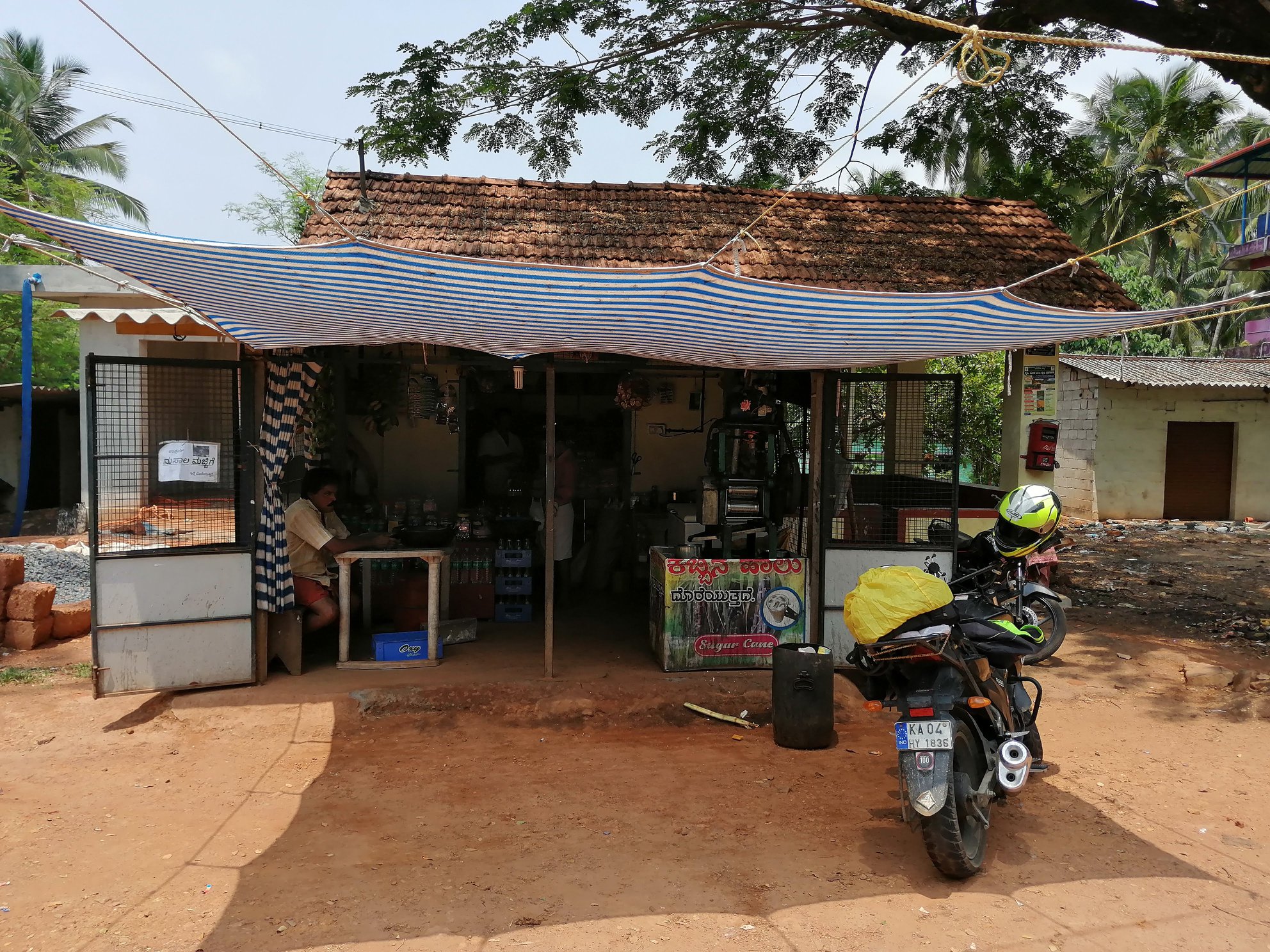 Kukke Subrahmanya temple was another 5 km from here, the time was 1.45 pm, the shop-keeper said, the temple closes at 2 pm daily and reopens at 3.30 pm.

I parked my bike in the parking lot and dumped my bag in the luggage room and took a special darshan ticket and walked inside the temple.  The queue for special darshan had very fewer people and got a quick darshan. 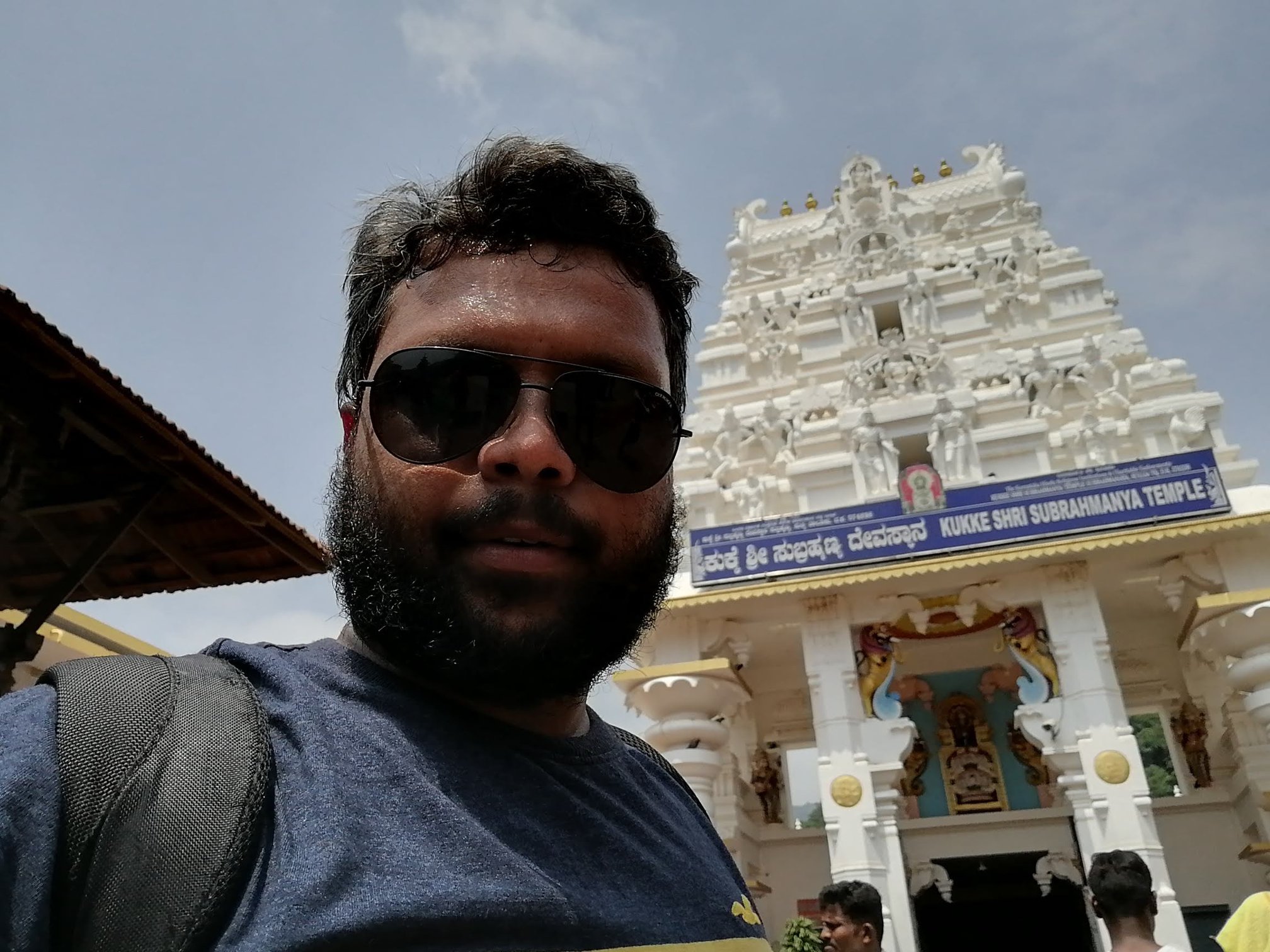 A much needed Chai and snacks at the hotel outside the temple fueled up at a petrol pump and reached the start point of Shiraadi ghat.  It was 5.45 pm and I wanted to pass through this ghat before it was dark.  I had a few near misses when I rode this ghat back in April 2017 during our return from Kannur, hence I wanted to clear this stretch before dark.

I was surprised to see this ghat had very good concrete road and clear road markings.  The road was well done without any patchwork.  The 27 km stretch ghat seemed like a highway, I rode non-stop until Sakleshpur and stopped for chai and hot bhajji. 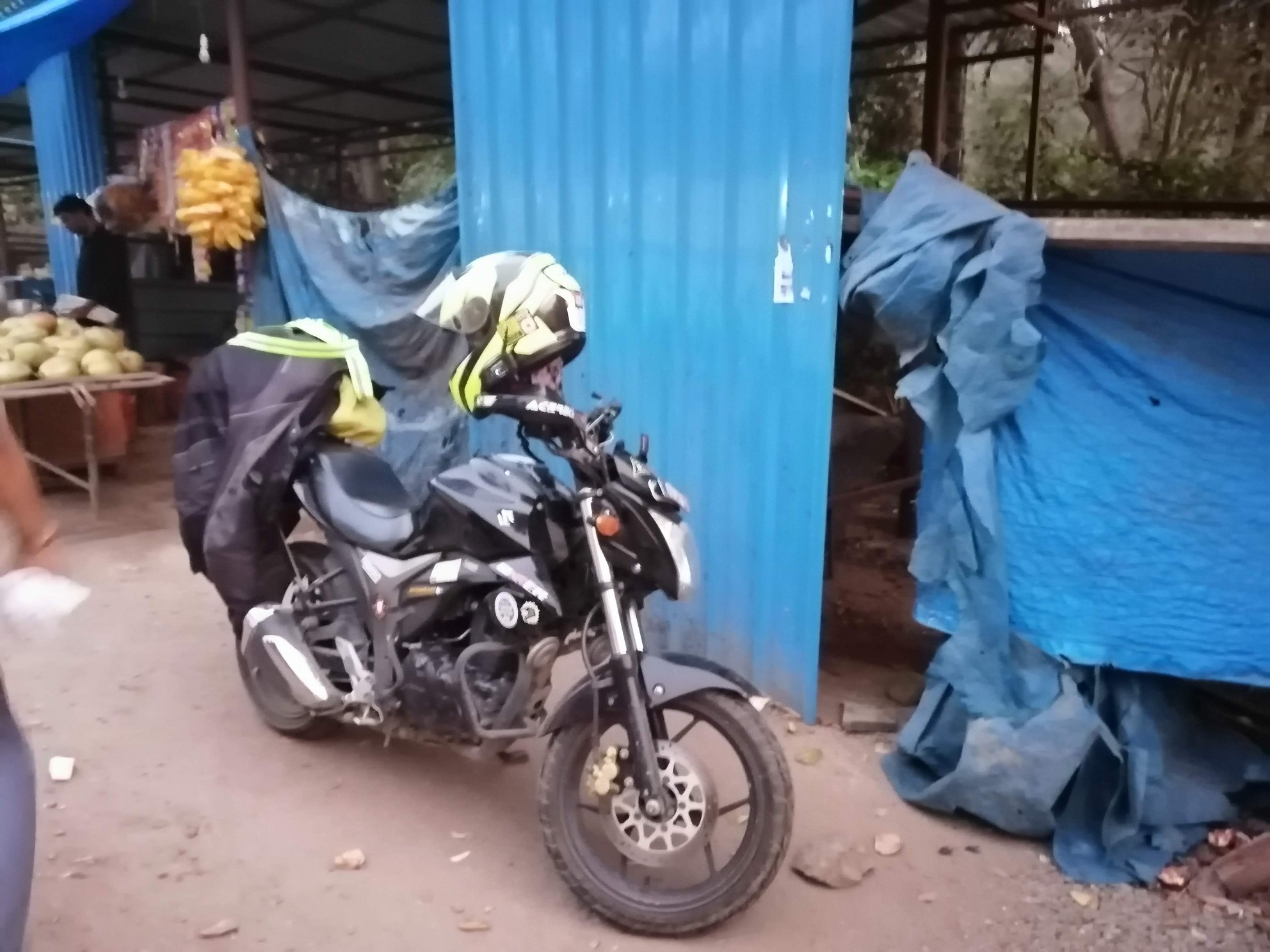 The next stretch from Sakleshpur to Hassan was never completed under construction with lots of deviations.  At Hassan, I took an extended pitstop over a call with Akshay who had started his Leh journey.

I reached the Hotel Empire, Kunigal at around 10 pm, Sudheer was already waiting for me there.  Both of us had our dinner and rode back to Bangalore.

When I was passing through Jay Nagar, the bungee cords loosened and my bag fell off the carrier, I had no patience to tie the bungee again, took the bag on my shoulder and rode home.

It was 1.45 am as I reached home, Thanks a lot Sudheer for yet another memorable ride. 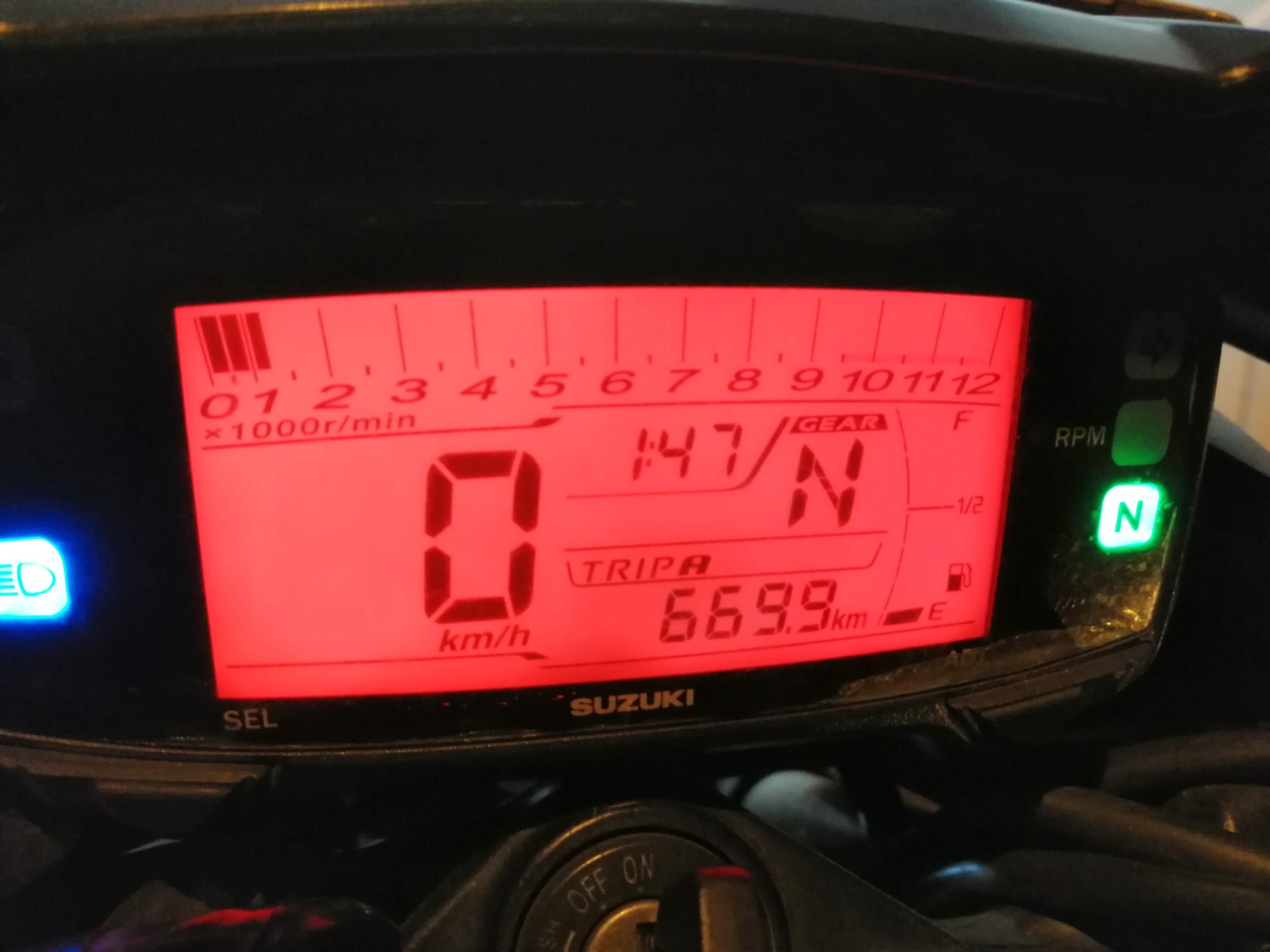 Also visit: The Ride of 3 States; Trails of Ghats