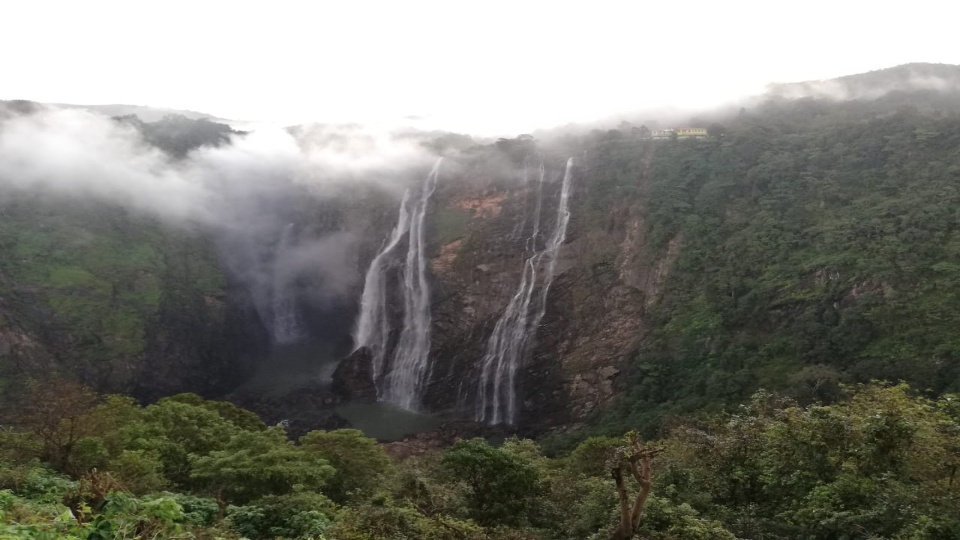 A road-trip to Jog Falls – The Paradise of Sahyadri

Jog Falls, also known as Gersoppa Falls or Jogada Gundi.  It is amongst the highest waterfalls in India and the 13th highest waterfalls in the world, located in the Sahyadri Mountain ranges of Shimoga district.  The falls are created by the river Sharavathi taking a plunge of approx. 850ft.  This was just a brief introduction to the very famous Jog Falls.

My brother Akshay had planned this trip along with his office colleagues.  And, as usual; I decided to join them last minute.

Akshay and his friends left on Friday night of 7th Sept 2018 and I initially planned to ride solo on the next morning.  Somewhere on Friday afternoon, I pinged my friend Sudheer on office communicator; saying I am riding to Jog Falls.  Sudheer got excited with the plan and he also craved for a long ride somewhere amidst greenery.  Sudheer agreed to accompany me.

Post office hours, I got my bag packed and the riding gears ready for the ride.  As I was about to sleep, Sudheer dropped a WhatsApp message, I might not join . . . !!!!

I started from my home at around 5.30am and stopped for a chai near to PES University and noticed a missed call from Sudheer.  I quickly dialed him back to hear him saying; “Maga, I will also join, will meet you at Parle Factory Toll”

The first thing we did as we met, was getting our Intercoms paired so we could speak while we rode.

So, we were all set to see Raja, Rani, Roarer, and Rocket.

The plan was to ditch the highway and take the single lanes that passed through towns and villages that surrounded by greenery all over.  So, we planned this route:

We stopped for breakfast at Darshan, Tatte Idli near Kunigal. From here, we took a detour from the highway making our way towards Tiptur.  We saw a big lake beside the single lane road.  Thanks to the rains that splashed in Karnataka this monsoon.  The water full lake was picturesque.

Meanwhile, I got a call from Akshay saying they had already reached Jog Falls.  The pleasant weather along with the tiny droplets of rain made our ride smooth.  Over the intercom, Sudheer and I, only spoke about biking, our various travel stories, describing the route, and lot many things . . .  blah blah blah blah!! The talks went on and on….

Somewhere near Kadur, we stopped to have some tender coconut water.

The ride continued and soon reaching near to Bhadra Dam, we could sight the water flowing in full gush from the gates of the dam. We could see this gushing water from alongside the road.

A Stop-over for lunch at Shimoga at a local hotel, some baadoota (naati koli) style.  Meanwhile, I kept my Intercom for a quick charge at the billing counter.

Post lunch, the ride continued, and somewhere in Kumsi village, my bike got off.  I kick started my bike and as I throttled, I could sense heavy power lag.  My bike wasn’t going above 30kmph.  I stopped at the side and started to enquire for a garage.  One of the shopkeepers said the garage is just on the opposite side of the road.

I quickly pushed my bike to the nearby garage there, the mechanic there said my bike’s battery had fully drained and he would need to charge it for 3-4 hours.  Meanwhile, I called Sudheer and told him to wait until I provide an update regarding my bike’s condition.

I convinced the mechanic (Avinash) that I would take one of his fully charged spared battery fixed to my bike and continue the ride, while he charges my bike’s battery until I return the next day. Luckily, he agreed for this.

Post fixing the battery, I started my bike and rode to Anantapur village where Sudheer waited for me.  We rode till Talaguppa and took a detour towards Jog Falls which was 15 km approx. from Talguppa.  Riding through few twisties and curves we reached the entrance gate of Jog Falls and straight to the Govt. Bungalow in there.  Akshay had pre-booked the bungalow and we joined them for that night.

The view of the falls from the bungalow’s balcony was breathtaking.  We sat downstairs outside of the bungalow listening to the soothing sound of the waterfall, wow!!! What a peace that was being away from the honking sound of city traffic.

Over the dinner table, we got ourselves introduced with everyone here. The dinner which was served here was simple yet tasty and post-dinner, every one of us crashed to bed.

Few of us woke up early and walked towards the main viewpoint.  The tranquil valley was swaddled in a veil of mist and through which we could see the 4 water streams; Raja, Roarer, Rocket, and Rani plunging off the cliff.  We sat silently on one of the benches there watching this spectacular view.

If you want to make your dreams come true, the first thing you have to do is Wake up – J. M. Power

We had some tea and biscuits in the nearby shop there.

As we headed back to the bungalow, the breakfast was ready to be served.  Lemon rice with chutney which was served for breakfast, after which, we were all ready to head back to Bangalore.

Taking a few group pics and greeting goodbye to each other we started the ride back to Bangalore.  Akshay’s friends had come in a car while Akshay had come by bike, so he decided to ride back with us and one of his friend, Amshith joined him as pillion.

Our initial plan was to go to Kumsi, fix my bike’s battery and ride to Sringeri and then head to Bangalore.  But as we were a few kilometers away from Kumsi, my bike faced the same power lag issue with the bike’s battery being drained fully again.  Akshay tried to leg tow my bike but we couldn’t do it due to the uphill roads.

Meanwhile, I told Akshay and Sudheer to be at the garage and send the mechanic till here.  Avinash (the garage mechanic) was helpful yet again as he came riding till the place where my bike was totally off, replaced the charged battery with which I could get my bike started and continue the ride back home.  We knew that my bike’s battery would give problems yet over again, so we decided to ride straight back to Bangalore skipping the plan of visiting Sringeri.

We took a detour after Kumsi that took us through pothole filled roads in anticipation we would touch the highway soon, so we could zoom quickly on the national highway.  We reached the highway just after Davangere where we stopped for lunch at Sagar Dhaba.  The food here was lip-smacking and tasty.

From here we rode non-stop for a stretch of 140 km approx. until we reached Sira Toll and stopped for evening tea.

As I crossed Tumkur, my bike faced the same issue yet again.  The darkness had overtaken and I couldn’t switch on my bike’s headlight, indicators and couldn’t even beep the horn and bike couldn’t take acceleration beyond 40kmph.

I initially jumped all the potholes and humps as there was no visibility of the road due to darkness.  I then started to follow a petrol tanker taking the cover of the tanker’s tail lamps to see through the road.  I was riding watching at its tail lamps and following the tire lane and being ready to hit the brake in case the tanker jumped over any humps or potholes.

I did that for a few kilometers until the tanker stopped over at a roadside dhaba and I too stopped for tea.  Meanwhile, Akshay and Sudheer had already crossed Nelamangala Toll.  Then, I found an uncle riding a splendor with bright lights and doing normal speeds of 30 to 40kmph.  I kept riding behind him taking the help of his bright lights.  I followed his lane until Nice road junction of Nelamangala.  The splendor guy being fearful kept looking at his rearview mirrors of being surprised who is following him from such a distance.

Thank you, uncle, and sorry to keep you fearful.

I sighted the street lights, and happily rode till Parle Toll and by now my bike was totally off.  The bike couldn’t be started with any number of kicks and then I towed my bike till the Indian Oil Petrol Pump on the cross of 8th Mile road.

Parking my bike here and started to inspect my bike’s problem.  I saw a wire being cut and thought the bike’s battery power getting leaked from here. I walked for few meters in search of a garage, when nothing found, walked 2kms ahead and found a stationery shop where I bought an insulation tape (electrical tape) and sealed the wire with the insulation tape.

Woaahhh !!! My bike did start again. From here, I could ride amidst power loss and facing jerks, somehow made it till Phani’s house in Malleshwaram where I dropped my bike and then booked a cab back home.

It was yet another memorable ride of 860kms on my bike odometer.