Hope you have read the previous Episode, in case you haven’t, Click Here to read Episode 04

This episode takes us on the next leg of our journey as we bid goodbye to Leh. Riding the World’s Highest Motorable Road, exploring Sand-Dunes of Hunder, where I ticked off the dream of riding a Double-Humped Camel.

I hardly slept the previous night since the excitement of riding on the World’s Highest Motorable Road kept me awake, the experience would be unfathomable and I just couldn’t wait for the sun to rise and for us to embark on one of the most monumental parts of this epic journey!

At the first light of dawn, we packed our luggage and went to the breakfast counter. To my astonishment Phani arrived at the table with a piece of sandwich in his mouth, holding his office laptop and says; “Bro, I have urgent office emails to be actioned!!!  With our adrenaline pumped up high; Atish Bhai and I sat with a facepalm, unknowing what to respond to this monkey…!!  While Phani was busy typing office emails, we concentrated on snacking bread omelet.

Meanwhile, Phani received an unexpected SMS from his sister informing us that “Phani’s parents had met with an accident in Bangalore”.  Phani dialed back home and enquired about his parent’s condition.  His parents were driving back from a family function and a drunk guy on scooter rammed their car.  Post the call, Phani said; luckily, the accident was a minor one, nothing to worry, we can continue the journey.   We finished the check-out and billing at the guest house and saddled up on our dusty bikes.

The first thing everyone did; was tying the Ladakh Prayer Flags across the mirrors of our bikes!!  If at all our bikes could think or speak; they would think these Ladakh flags as a “Medal of Honour”

Next stop; the long queue leading to the Fuel Station, where we refueled our bikes and also filled up the jerry cans with fuel.   The Indian Oil Petrol pump was fully packed with Bikers from all over India, it took us almost 45 minutes to refuel here.  Leh was at 11,000 feet above sea level, and since we would be ascending another 7,000 to 8,000 feet within the next 60 km.  I kept the Oxygen Can within reach outside my saddle bag in case of emergencies.

The Leh city and markets were jammed with traffic, and we somehow maneuvered through small lanes and marked our way towards Khargung La.  We soon sighted a signboard that read; “You’re on the Highest Motorable Road” 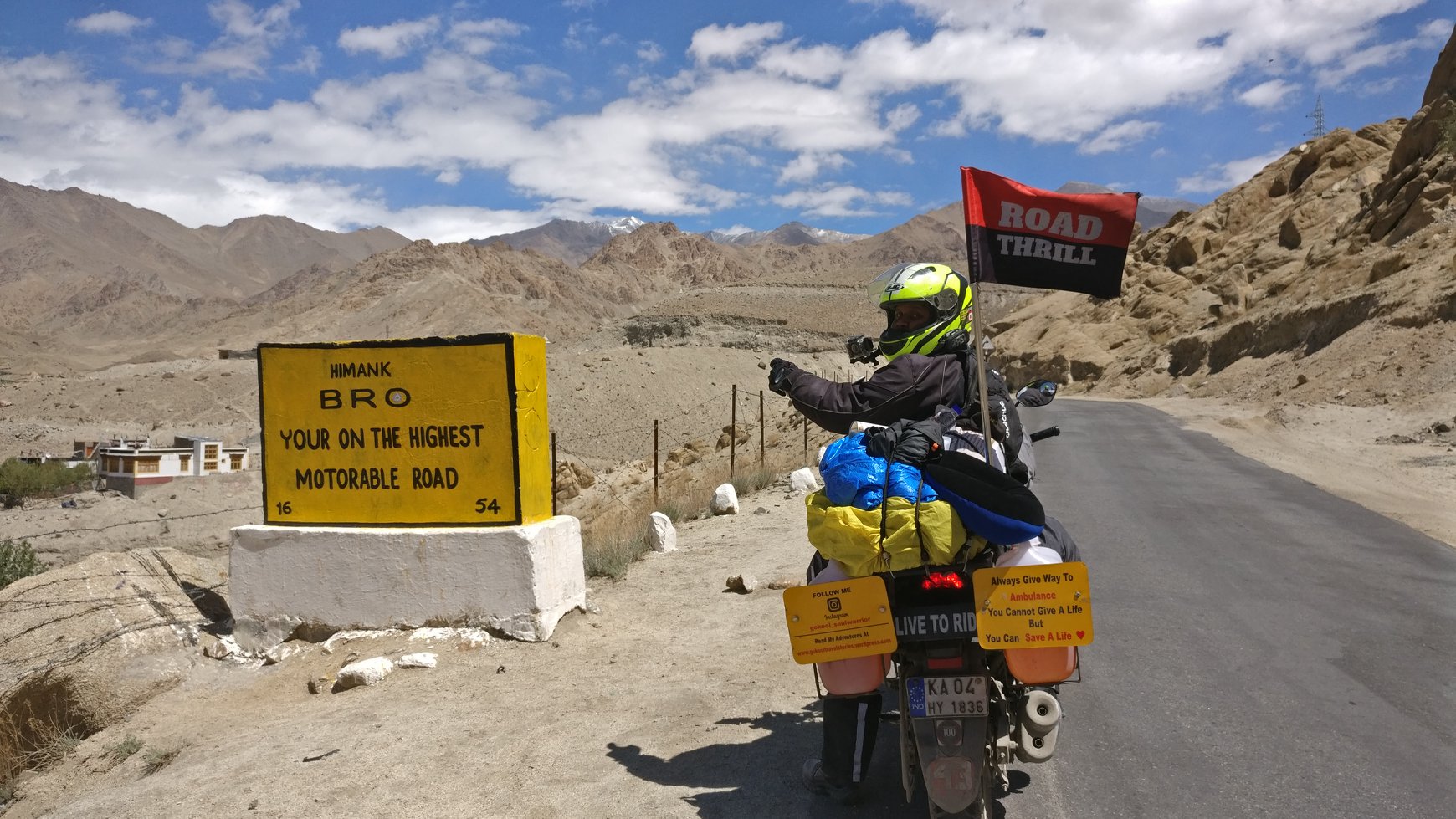 We reached the check-post of South Pullu where we submitted a copy of the Inner Line Permits and moved ahead. 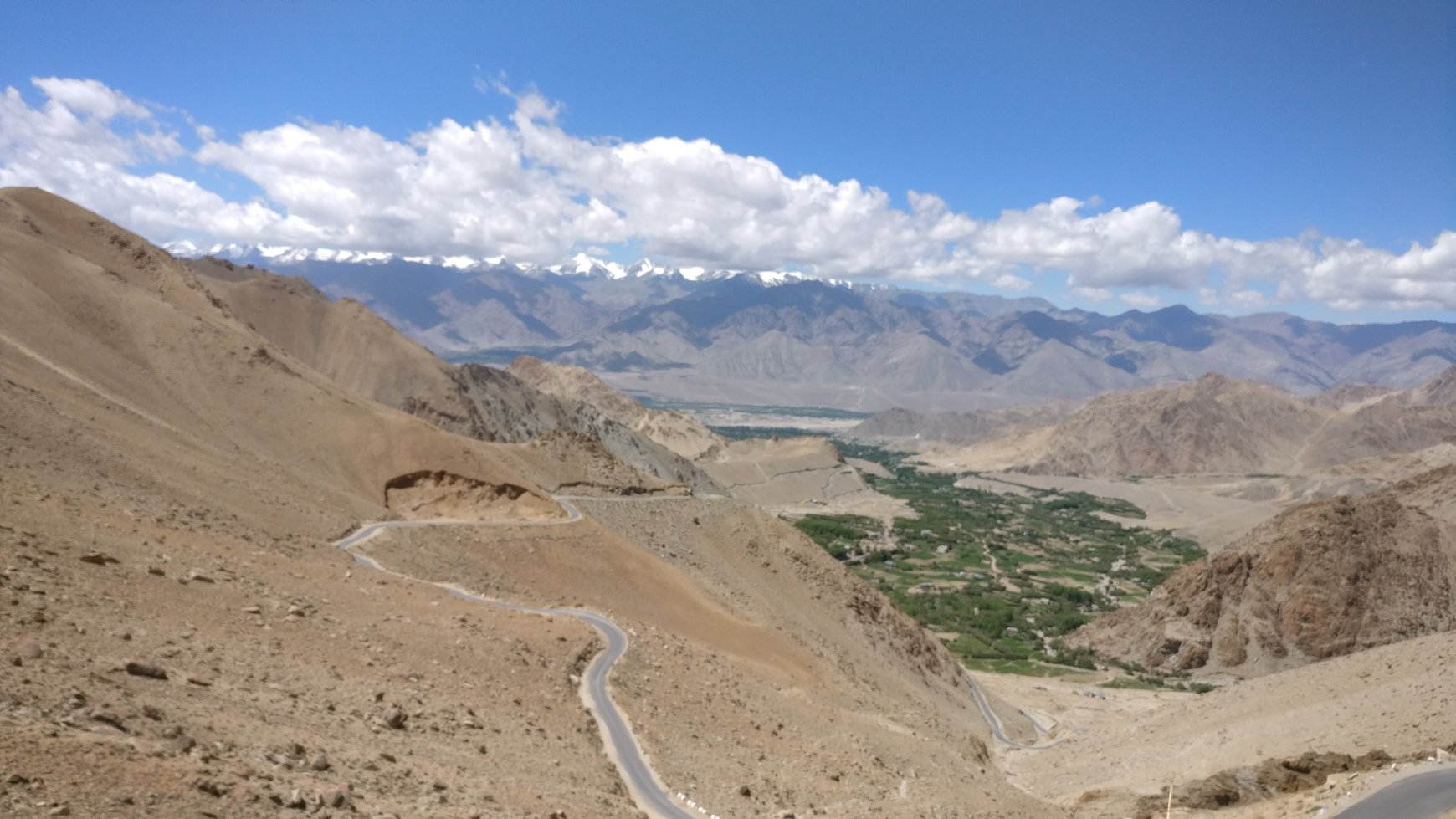 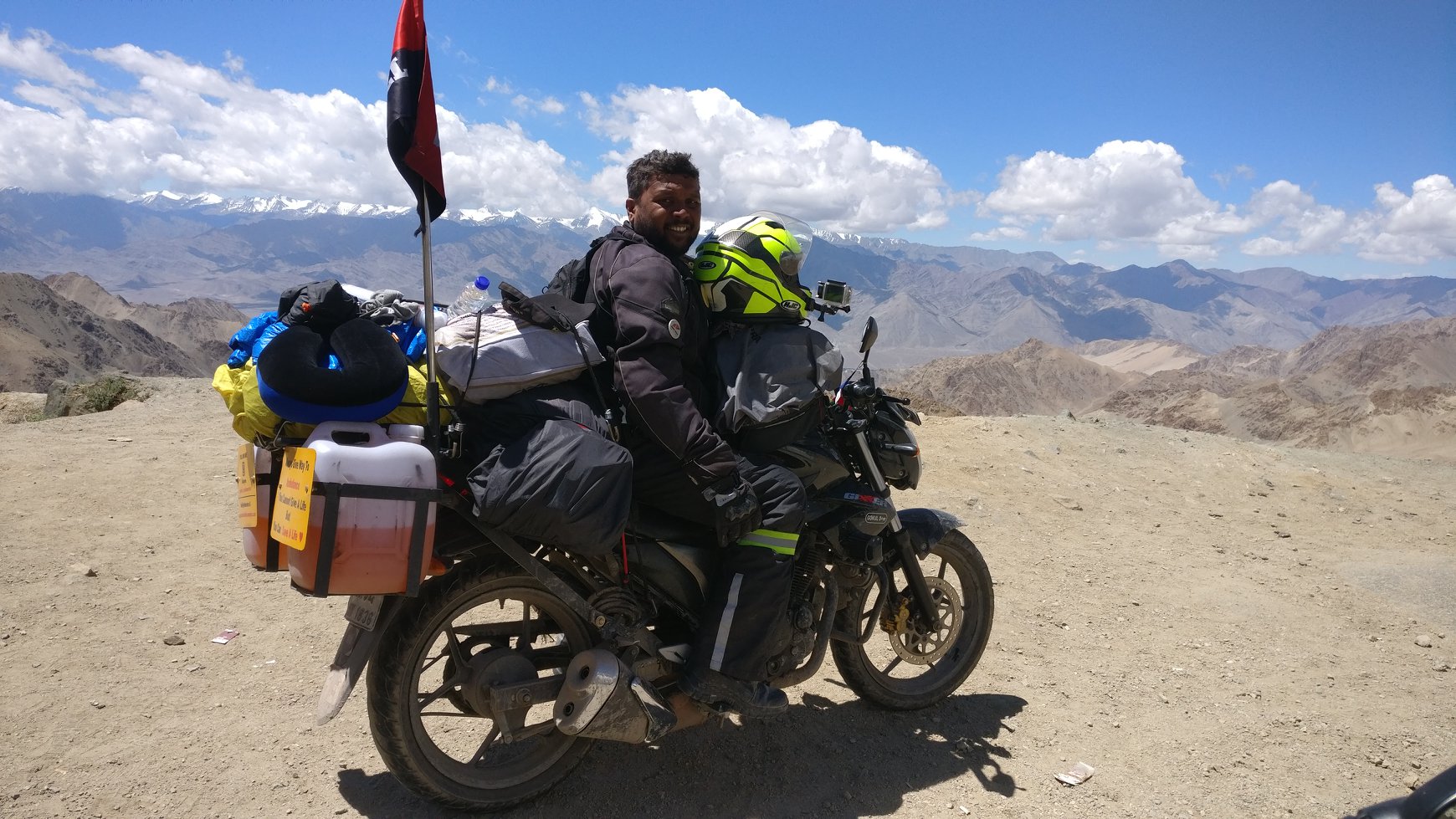 Somewhere, in the middle, my bike faced the same power lag issue yet again.  We stopped at the edge and quickly emptied the spare petrol from my jerry can into the one on Phani’s bike, thinking the 10-liter petrol added more weight on my Warrior, but nothing helped.

Phani and I swapped our bikes, even then we couldn’t figure out what the issue was?  I said to Phani, I will get back on my bike and throttle it out the hard way.

From here, the road was loose dirt and we could see a long line of vehicles from a distance due to a small landslide.

Phani spoke on the Intercom, “Bro, somehow lets maneuver and outreach the long queue so we can quickly zoom as soon the road is cleared”.  We managed to zigzag through the minutest gaps between vehicles and reached at the start point of the queue, eagerly waiting and watching the JCB dumped the mud and boulders aside.

This got cleared in less than an hour and as the JCB driver signaled us to start moving, we quickly accelerated and moved ahead.   The road ahead was a mix of loose gravel and snow on edges of the mountains that touched the road.

Looking at the tranquil valley; the moving clouds above the snow-clad mountains, a tiny village habitat, and grassland that looked like a tiny dot from above.  We felt as if we were riding towards the horizon.

Few kilometers from here was the K-Top (Khardung La Top at 18,380 feet above sea level), and we could see mad rush here.  Everyone wanted to get their pictures clicked with the Signboard of the World’s Highest Motorable Road.  We patiently waited for our turn.

Conquering this feat was a feeling of achievement, a long pending dream that was accomplished.  The Gut feeling of never giving up and braving all the challenges throughout the journey with a feeling we would definitely Win!!! 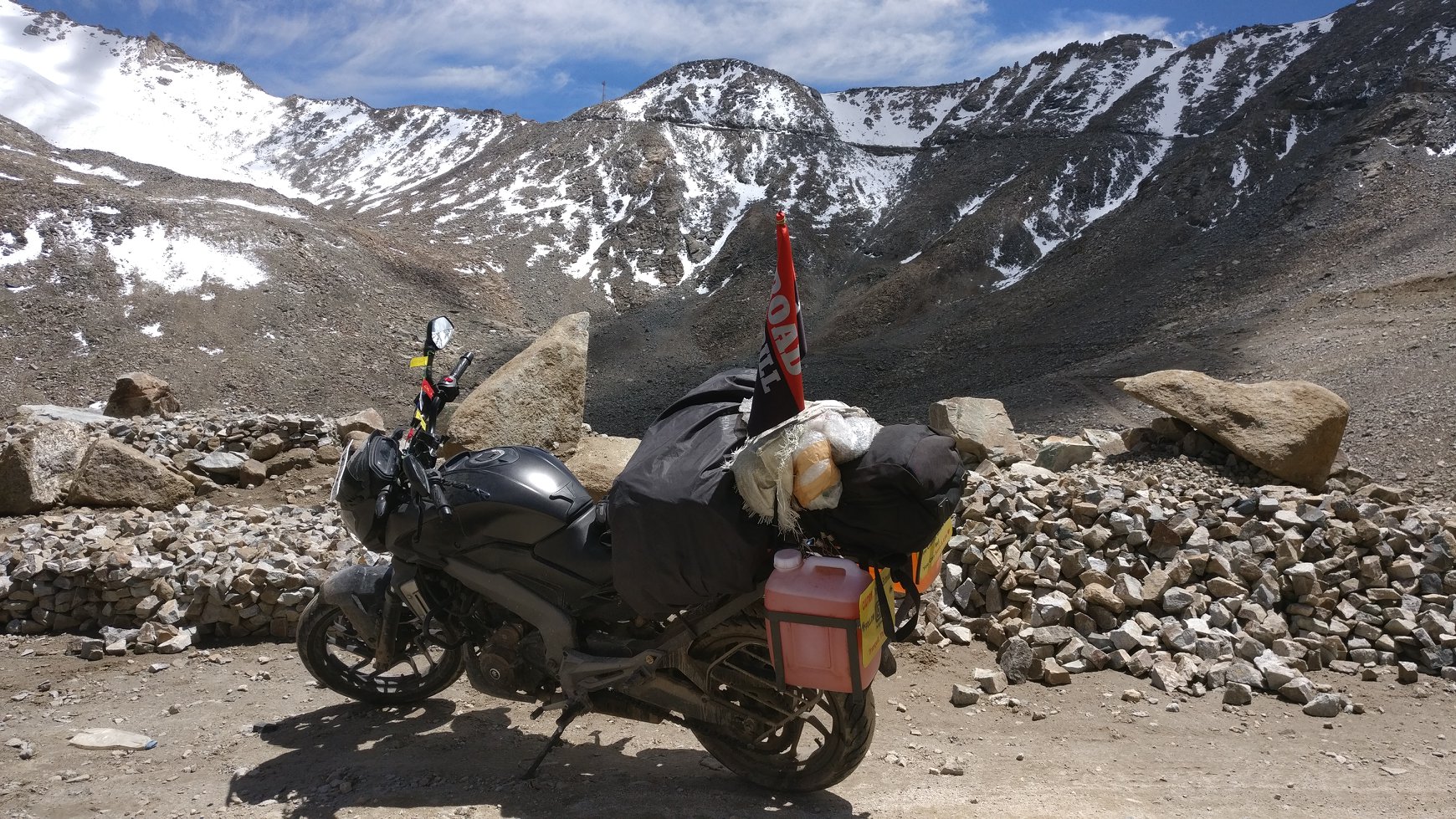 Our next destination was Hunder and we started descending downwards.  Somewhere en route North Pullu, we stopped aside when few Army trucks came from the opposite direction, we stood from our bike’s seat and saluted the Soldiers, and the Soldiers would salute to each and every person who saluted them.

As I write this blog episode after a very long time, I am nostalgic as I can still visualize this Salute scene and it has been one of the proudest moment of my life.

Very soon, we crossed North Pullu and stopped at a dhaba for lunch.  I felt breathless and had a headache.  My previous experiences helped me quickly realize the symptoms of AMS (Acute Mountain Sickness), I pulled out the Oxygen Can and inhaled slowly while rushing inside the dhaba.  I felt better in some time and avoided another nightmare. I ate the only food available here i.e. Maggi, and after having it, popped in half a Diamox Tablet with hot water and took a power nap for an hour on a bed inside the dhaba.  With refreshed energy, we were all set to ride ahead. 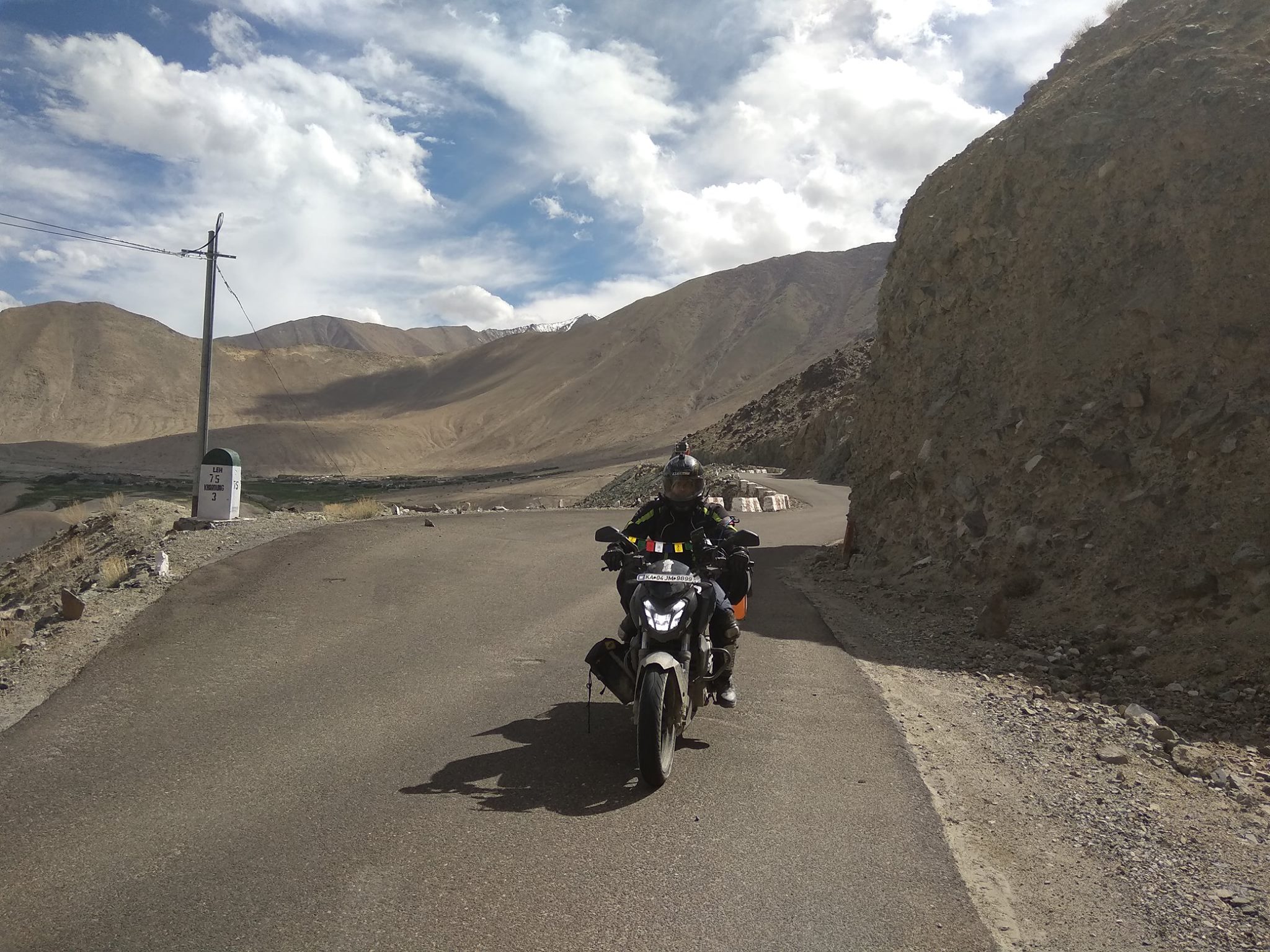 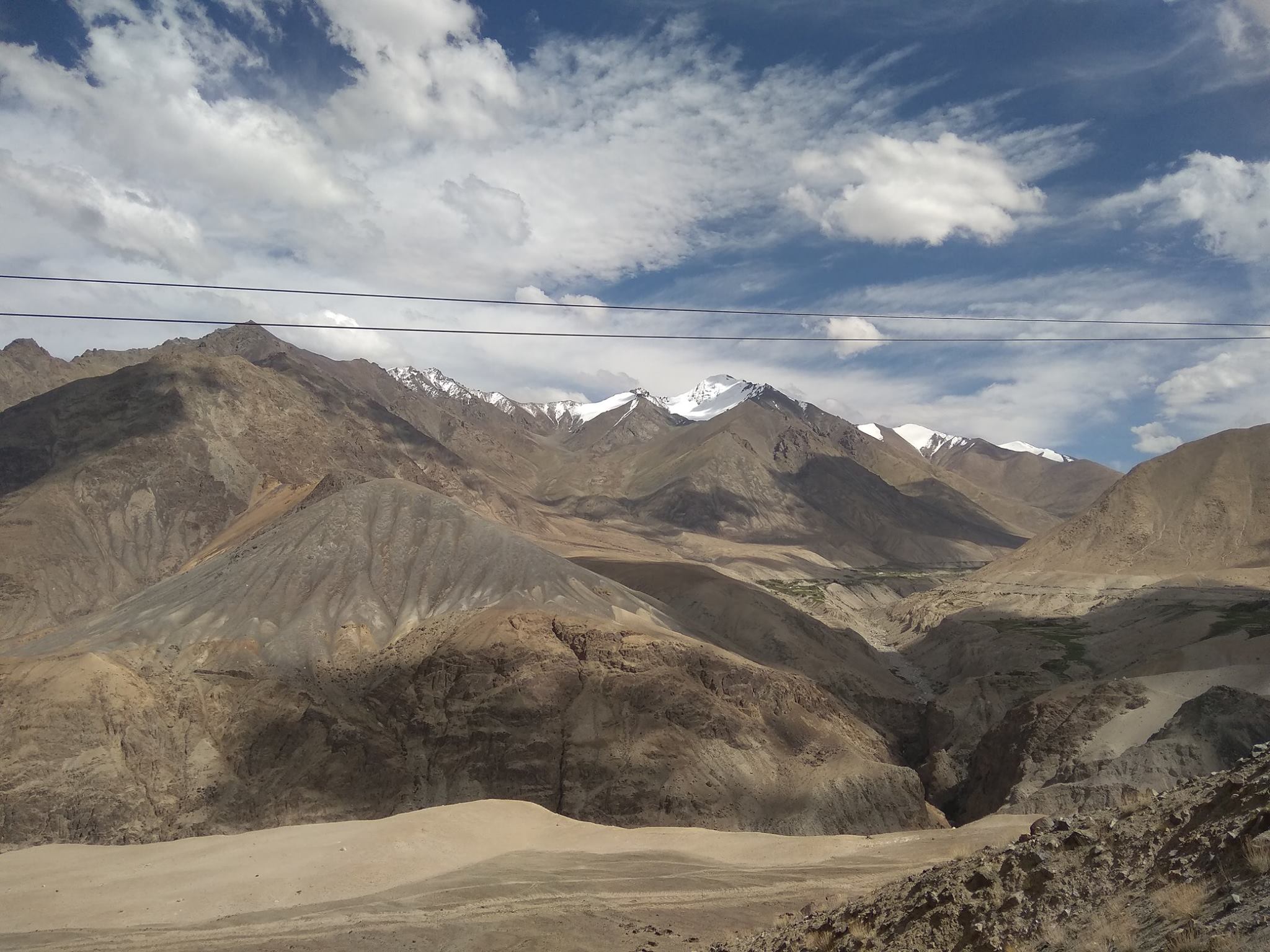 Next leg of the journey; was towards Maitreya Buddha in Diskit, with the cool breezy wind coupled with sunny weather, the ride was pleasant and the smooth tarmac was welcomed by all after the slushy, loose graveled roads behind us, we racked up a lot of miles quickly on this section. 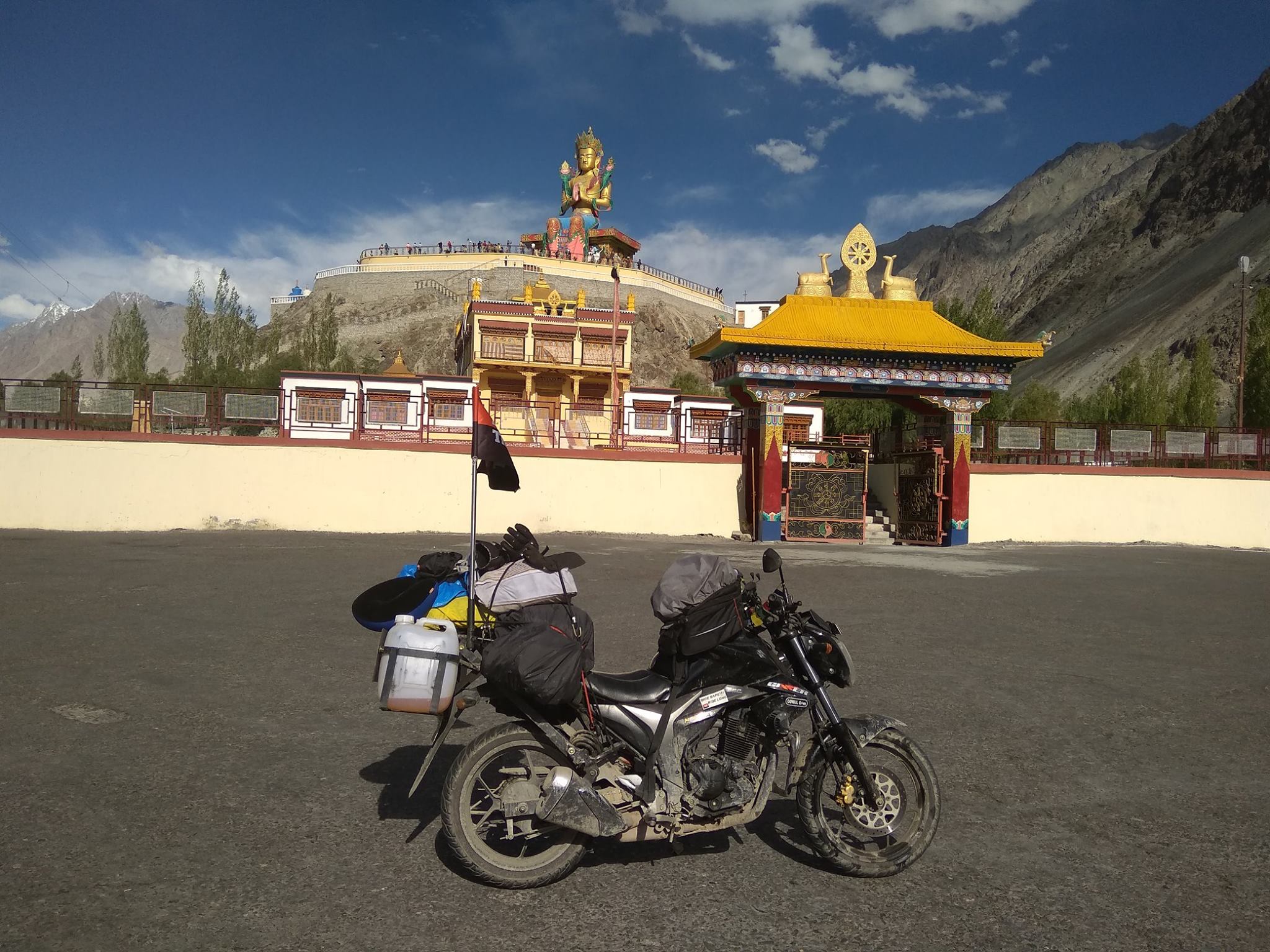 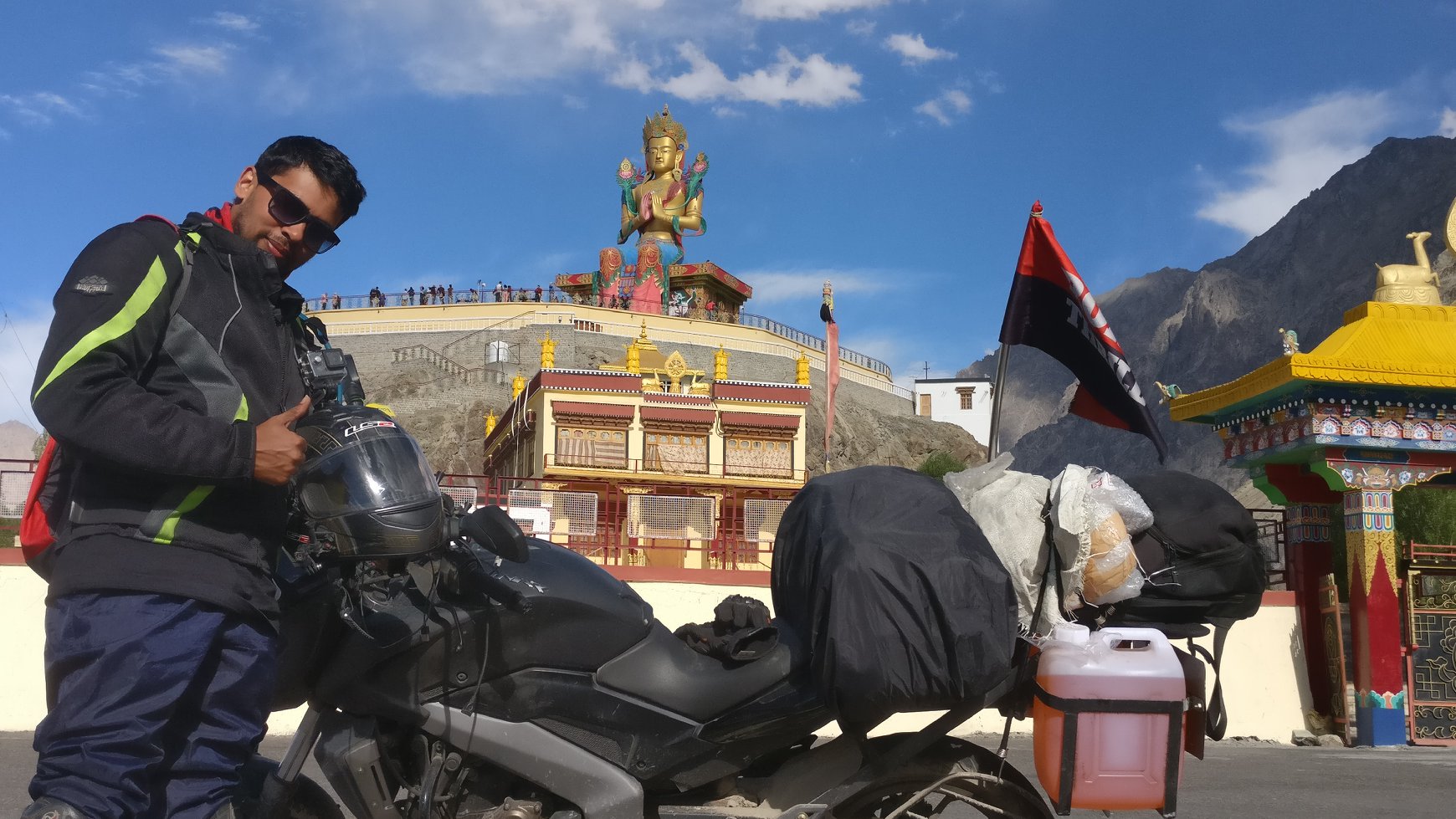 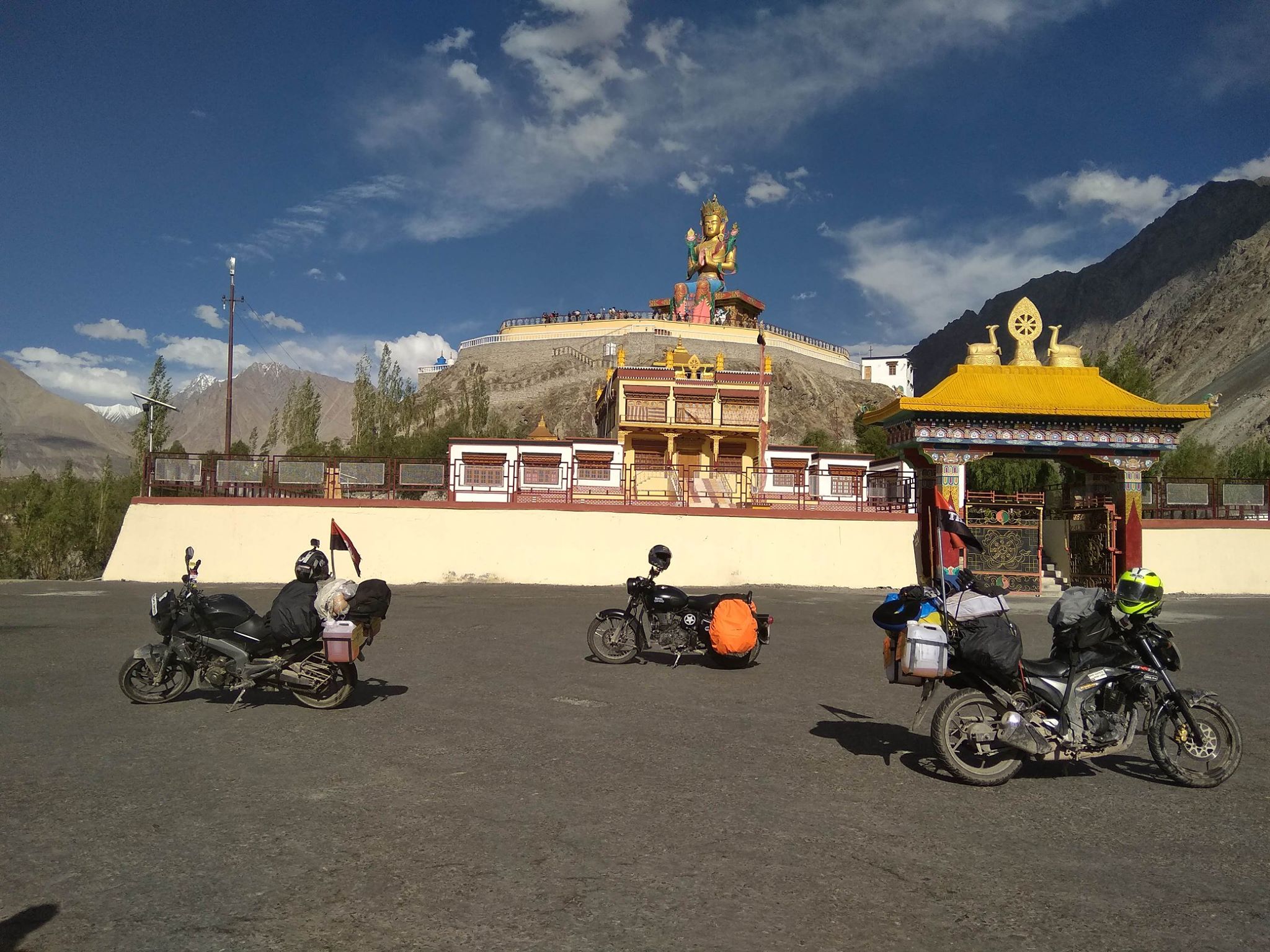 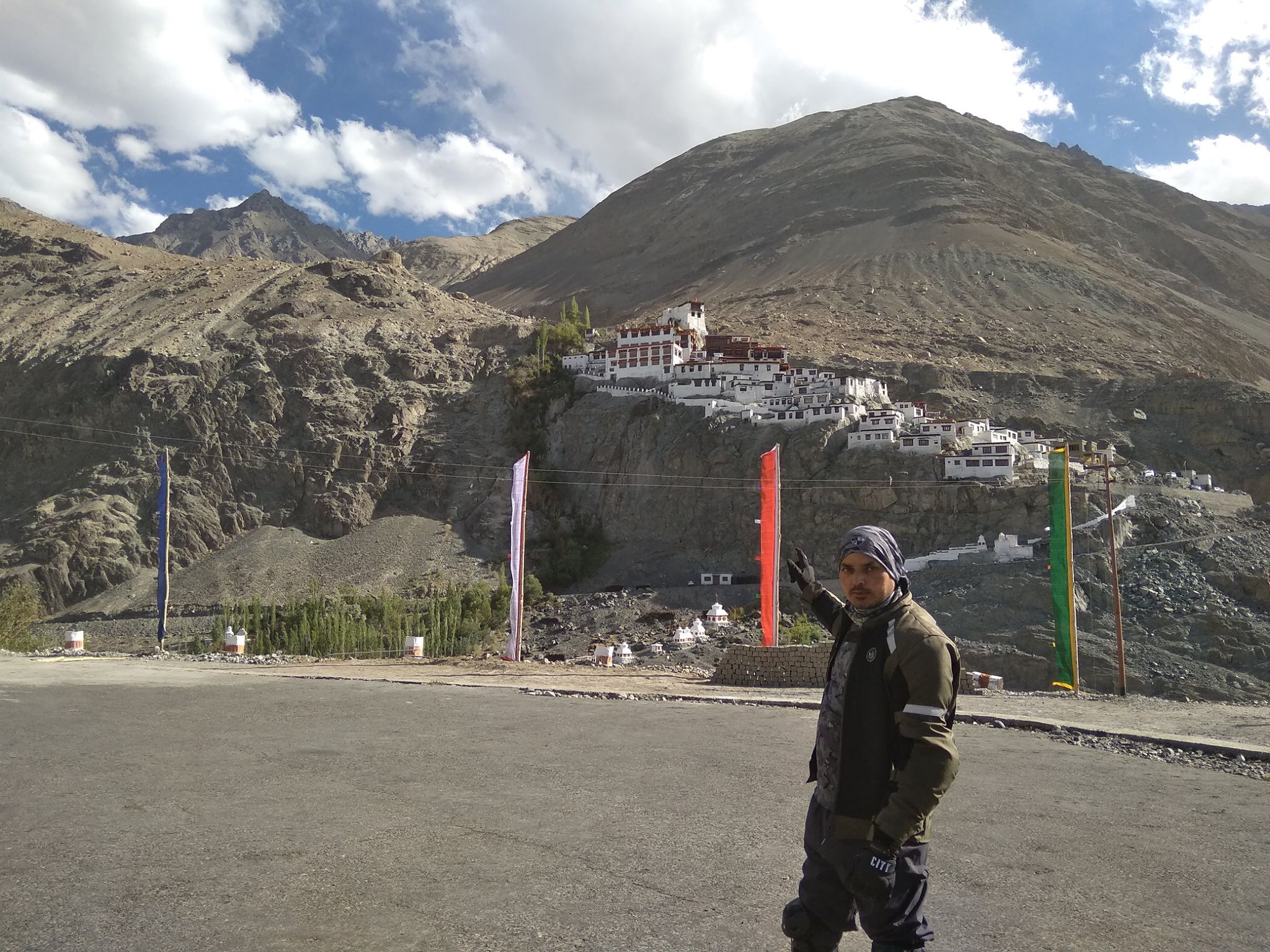 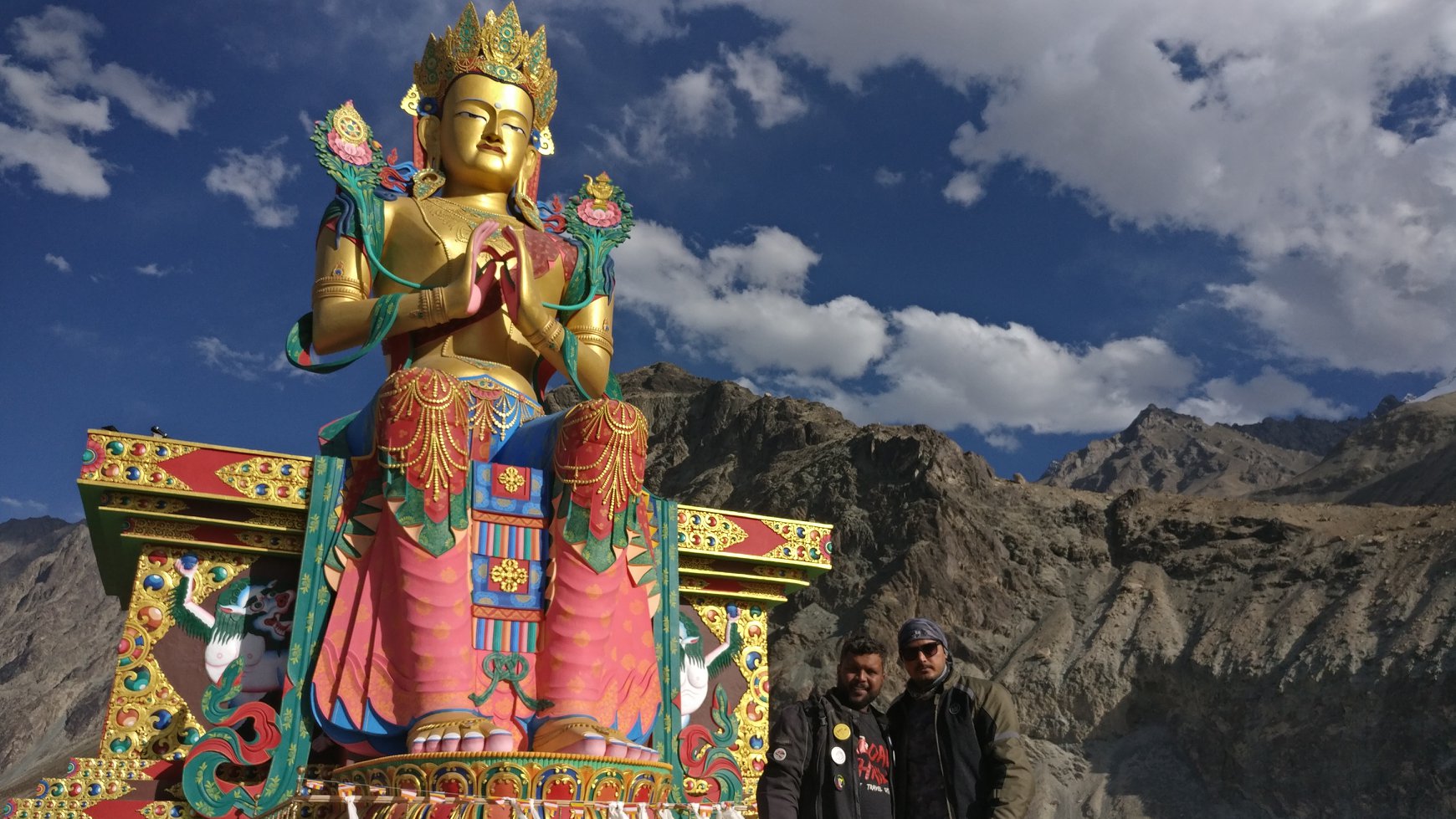 We had our evening tea at a small hotel nearby and I purchased some magnetic badges as a souvenir to take back home.

Another 25 km ahead, was Hunder, a place known for its sand dunes and double-humped camels.  We could see the twirling sands across either side of the road. 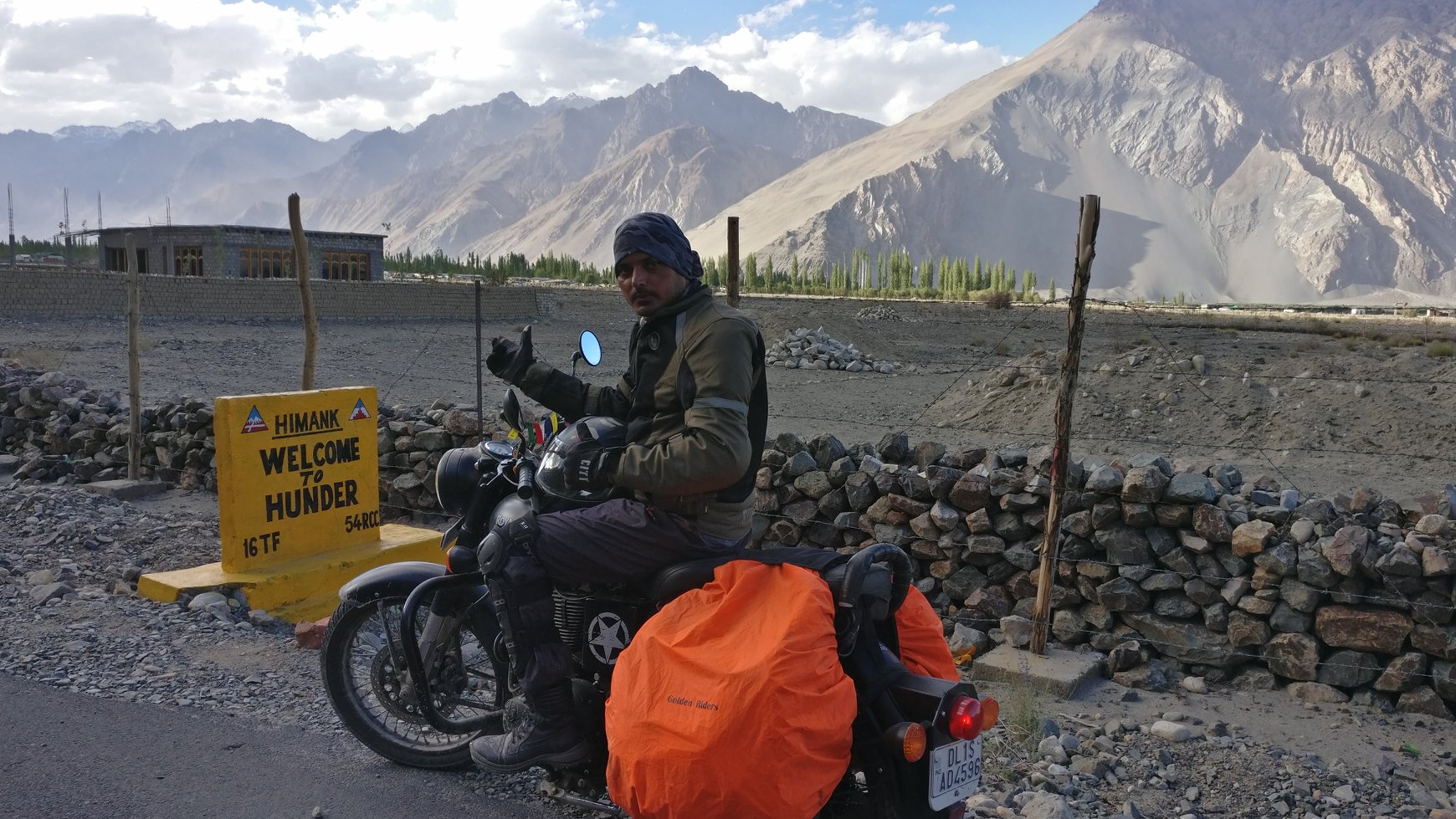 From a distant far, we could see people taking Camel Rides on the Double Humped Camels (also known as Bactrian Camels), they are exclusively found in Nubra Valley in Ladakh region in India.  Outside India, they are found only in Mongolia.  I didn’t want to miss this camel ride and soon reached the place of the camel safari.  We parked our bikes and walked on the sand towards the camels. 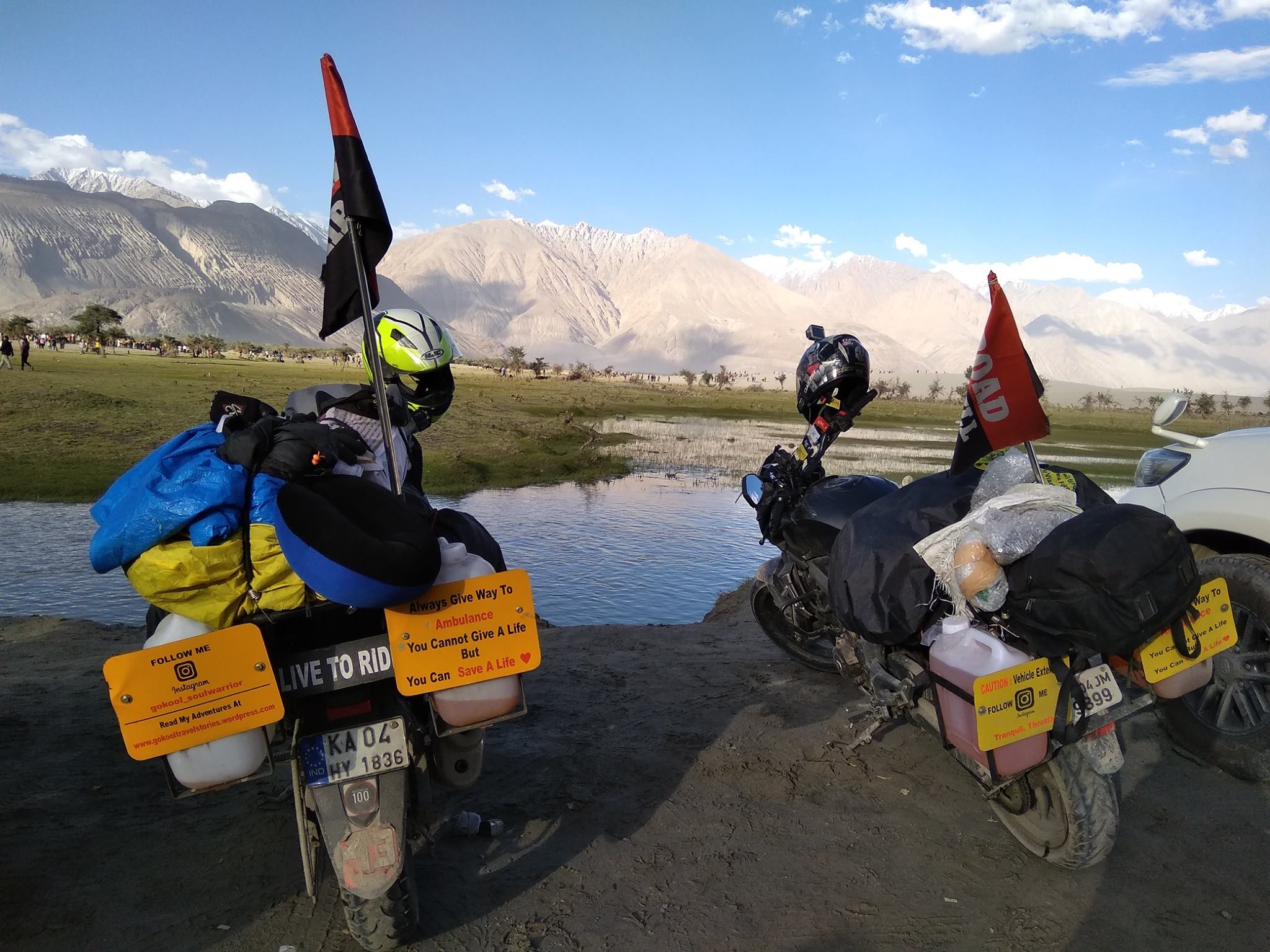 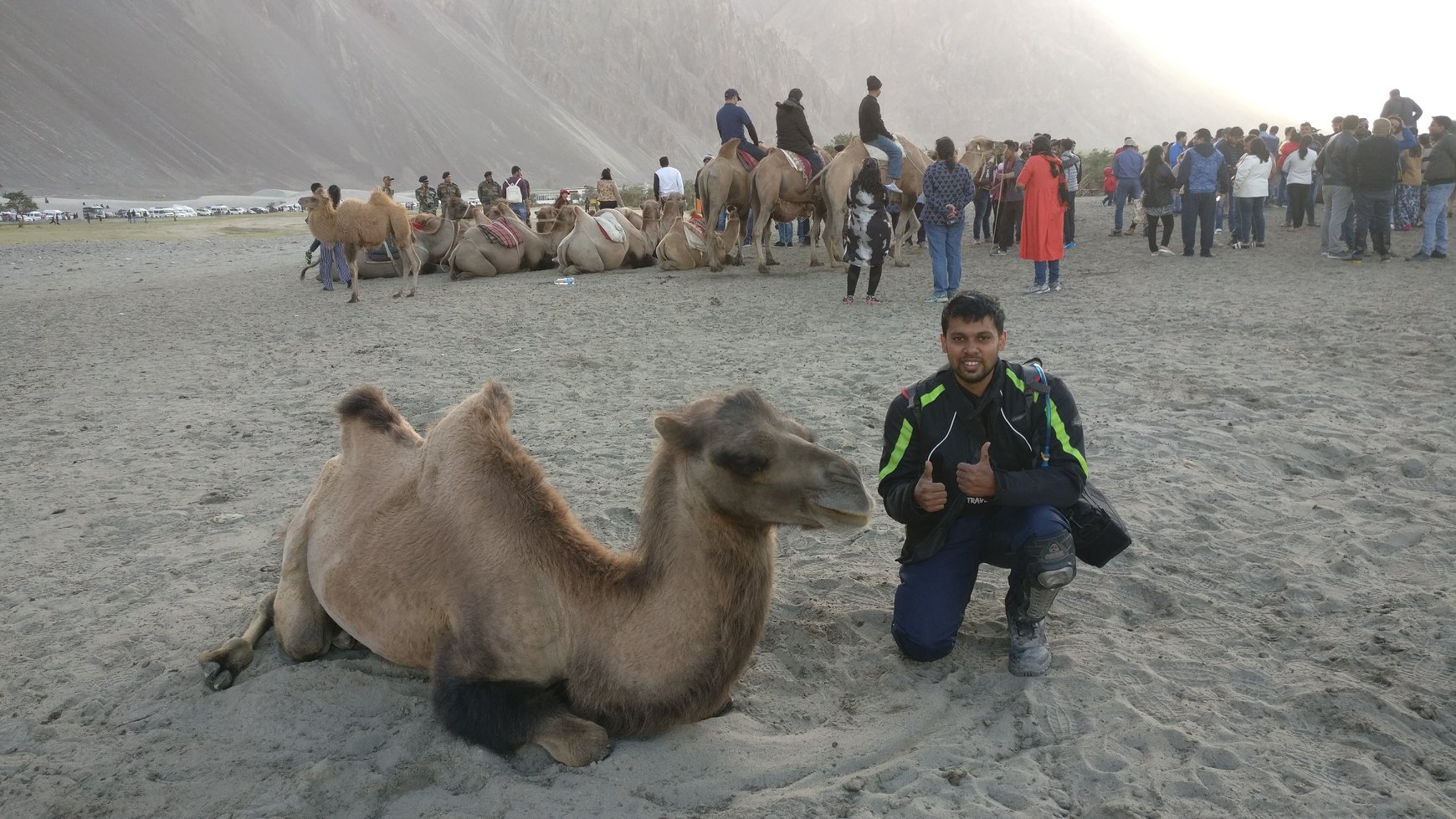 I purchase the ticket that was approx. INR 200/- and in my riding gear;  hopped on a Double Humped Camel.  As the camel got up or sat down, it felt like a wheelie or a stoppie; that only bikers can understand this feeling. 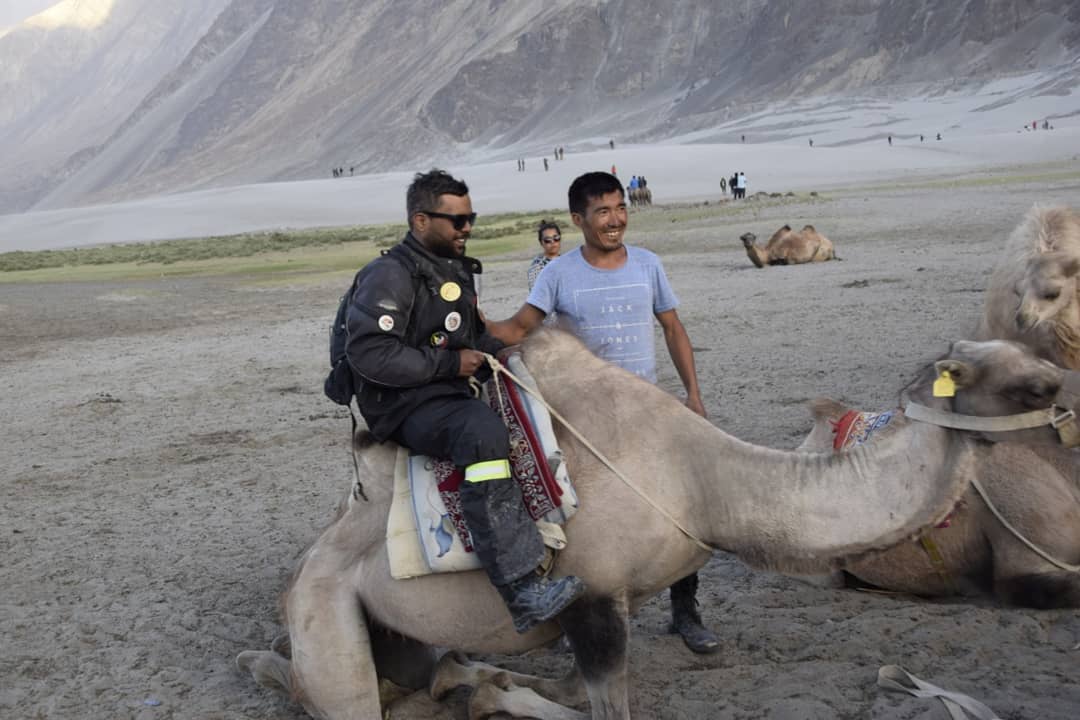 As I sat on the camel and gazed at the beautiful view around, the miles and miles of desert, the wind hitting my face, the clear and bright blue skies, the giant snow-covered mountains, It was an epic view of nature’s wonderful miracle; sand under my feet and snow on the horizon.

I wondered, how these camels listened and acted as per their guardian’s commands.  Almost an hour of camel ride, it was a dream come true.  Way back in 2017, my friend Chidanand had once told me, “You don’t miss that camel ride, you will never get to see a double-humped camel again in your lifetime, you will only see them at Nubra Valley”  It was a nice and memorable experience altogether. 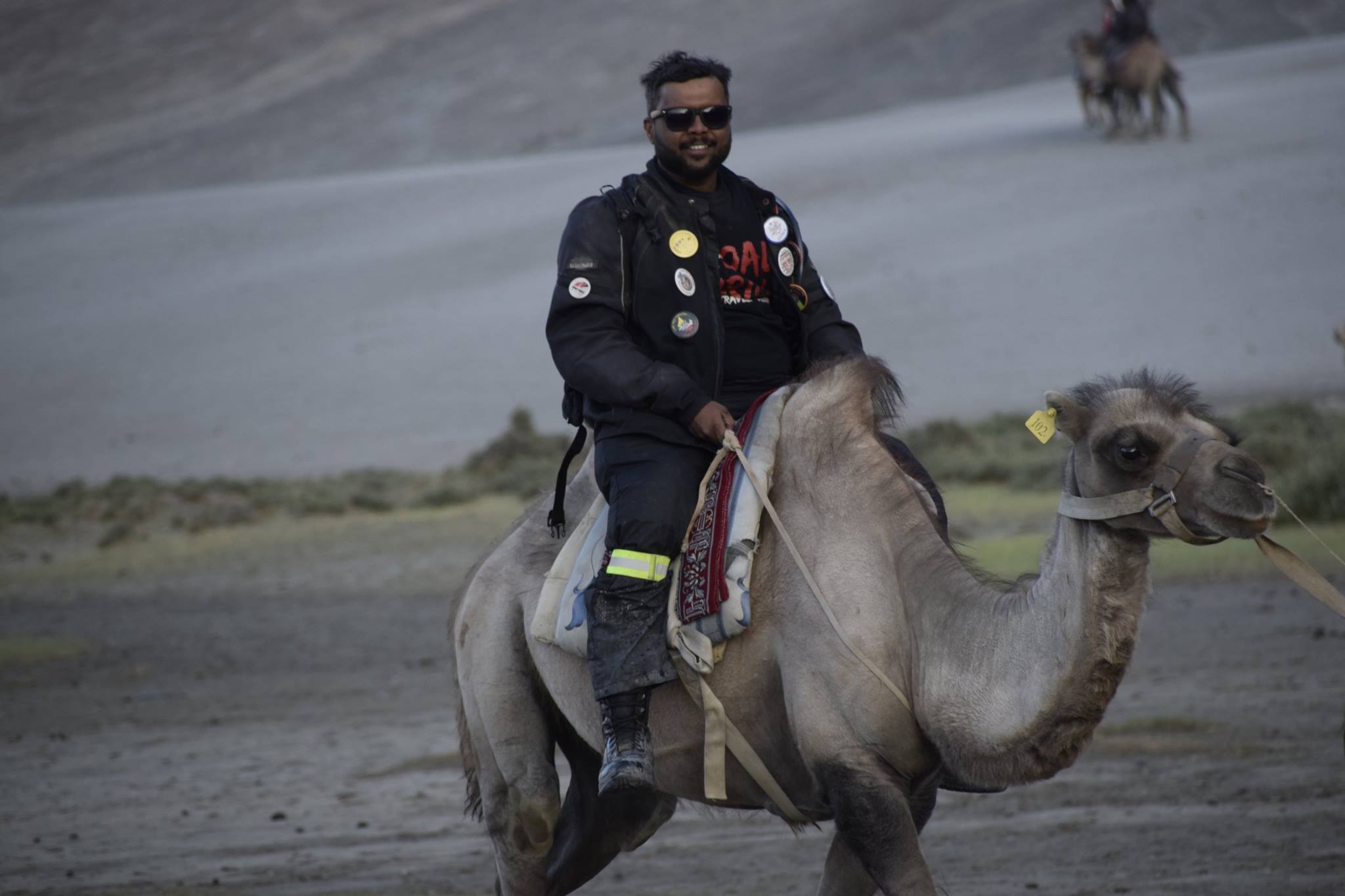 We went in search of accommodation for the night’s stay and booked a tent at Summer Holiday Camps,  and checked in.  We left all our luggage on the bike and picked only things that were required for that night’s stay.  We freshened up and walked on the dark streets of Hunder.  We were served with some delicious Punjabi styled buffet dinner and called it a night.

To be continued in Episode 06: Riding on the Shyok river bed en route to Pangong Lake and the extreme dirt trail to Tso Moriri.

A glimpse from the next episode: