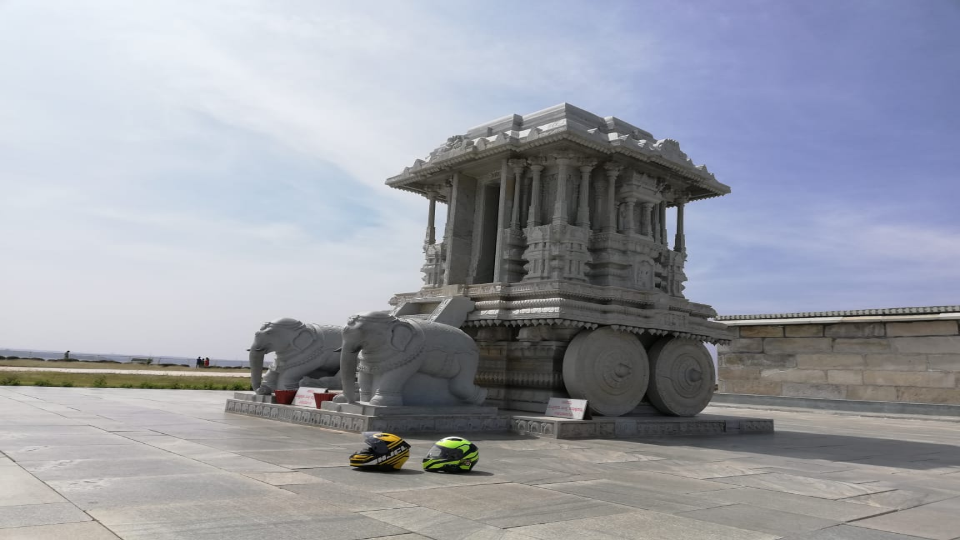 Venugopala Swamy Temple, a historic marvel of the Hoysala architecture that once submerged during the construction of Krishna Raja Sagara Dam, famously know as KRS Dam and the temple stayed underwater for a century.  The temple dome could only be seen during the draught of the early 2000s and then Khoday’s Foundation took up the responsibility to rebuild the same temple on the shore of KRS backwaters, even the maintenance is taken care by the foundation and now has started to lure tourists and explorers.

The in-house architects of the group shot the original temple on video and took over 16,000+ photographs.  Each and every stone was removed and reconstructed with trained artisans and sculptors along with experts who were involved in the reconstruction.

That was just a brief of the historic marvel.

Sudheer and I were planning for a day’s ride and we were looking out for some places in the range of 200kms (one-way) from Bangalore. We found about this place on the internet and quickly planned to explore this place. We communicated the ride plan to other of our biker friends in our office, so any interested riders could join us.

We decided to ditch the chaotic traffic filled Mysore road, so planned to ride via the Hassan road.  It was early morning of 8th Dec 2018, Sudheer and I met at Parle Toll.  We were accompanied by Darshan, and over a chai; we quickly got all our intercoms connected so we could talk to each other while we rode.  Over a cup of chai, we planned for our pitstop or breakfast point.  Within no time, we started our bikes and made our way towards Hassan Road.

A detour towards Hassan Road, I spoke to Sudheer, “Maga, you guys wait at the toll while I tank up my bike”.  From here, we rode till Hotel Mayura (near Bellur Cross) and stopped over for breakfast. This was suggested by Rajesh Bhai from Highway Delite.

All of us ordered for Idli Wada and Kesari Baath. The crispy Wada and the very delighted Kesari Baath made us feel it was worth stopping here for breakfast.  If you are traveling on Hassan Highway, don’t miss the yummy delicious breakfast here at Hotel Mayura.

From here, we turned towards Pandavapura which had 2 laned roads and the roads were under expansion for 4 lane highway.  Somewhere near Nagamangala, we saw a lake and told Sudheer and Darshan to stop over for some photography.

The best part of road trips is you can see the beautiful nature en-route the destination which you will never get to see if you are at your comfort zone of the four walls of your home or office.

From here, our next stop would be our destination which was 60kms from this point.  Sudheer zoomed off at a junction while Darshan and I rode through some interior roads of some village making our way to reach the destination.  As we both reached, we called up Sudheer and sent our GPS location to him.  We could see a convoy of Police and Government vehicles as the cabinet ministers of Karnataka State had their visit planned at the same.

Until Sudheer who was some 40kms away from the destination; reached, we thought to have some chai.  While we walked from the parking space, I sighted a Royal Enfield TB350 which had Road Thrill stickers and I dropped a message in our Road Thrill Bangalore WhatsApp group saying I am also at KRS Backwaters and we could meet. While taking off my helmet here, the side of my sunglass broke and until someone from Road Thrill replied, I looked out for a shop to buy a Fevi-Stik so that I could fix my broken sunglass.

Soon, to my surprise, it was Lohith Bhai along with his office colleagues and members of Road Thrill Bangalore who were also here for a ride. It was a surprise and pleasure meeting my extended biking family members from Road Thrill.

After some time, Sudheer reached the destination and we decided to explore the historical marvel.  Upon entering the temple campus, we were awestruck by the cleanliness and the maintenance of the temple campus.  We quickly walked inside the main temple sanctum.  The stones of the temple walls shined bright and a glossy satin finish when touched.

The main temple had the idol of Lord Krishna playing as a cow herd.  The temple pillars were in similar style to those in Belur – Halebeedu.  As we took a walk around the main temple, we had some casual talks with one of the securities there who explained us about the work and efforts undertaken by Khoday’s foundation in restoring this marvelous piece of historic architecture.

The restoration and reconstruction timeline is depicted on the walls of the main temple entrance.  Please do spend some time reading the historical facts of this temple.

Outside of the main temple, there lies a Stone Chariot like the one in Hampi. Until I visited this Venugopalaswamy temple, I was in an assumption that the only stone chariot was in Hampi.  It’s always good to go and explore places rather than reading it in some web or book articles. 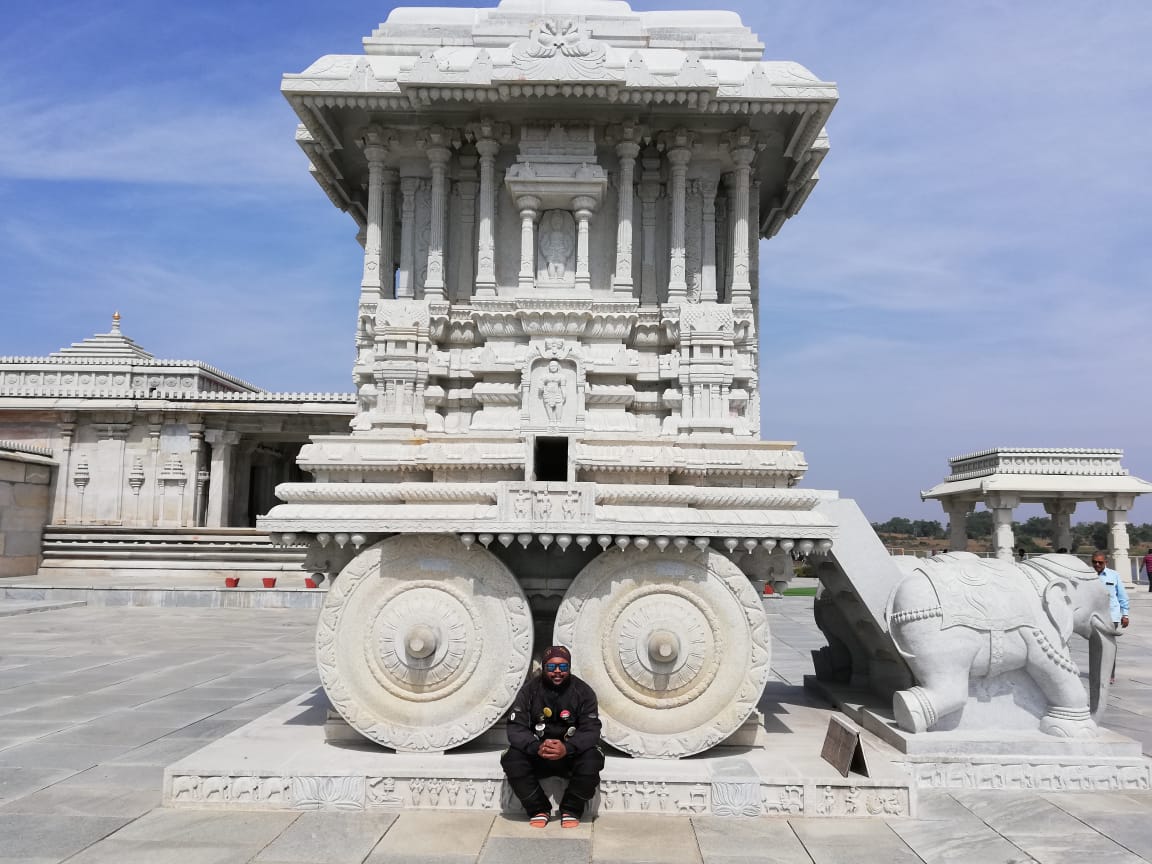 As this place is located on the shore of KRS backwaters, we sat on one of the benches looking for the vast dam. We started the return journey back home.  We stopped at a village to sip some tender coconuts and rode till Hotel Empire near Kunigal for lunch. Post having some authentic non-veg lunch, we just chilled on the benches there talking and discussing our other personal trips.  Post a heavy lunch and tasty fruit juice (which I never miss at Kunigal Empire), I took a nap on one of the benches here.

Once the Sun was set, we rode back to Bangalore, maneuvering the traffic, we reached Goreguntepalya where we bid good-bye to each other and zoomed back home.

Thank you Sudheer and Darshan for accompanying me for yet another memorable ride.

Stay safe, ride safe and please don’t trash in the places you travel.

Also Visit: List of Places to visit in Karnataka